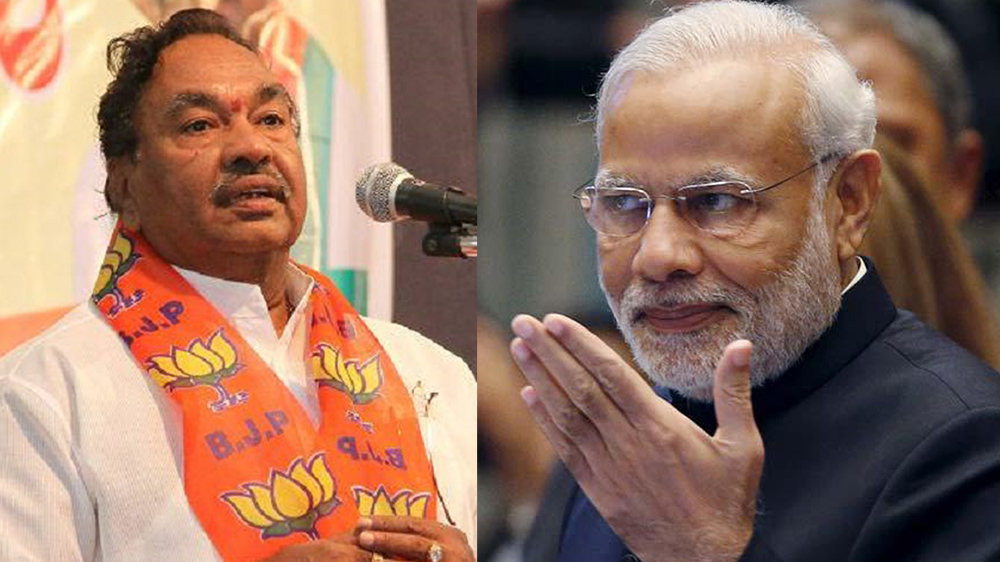 A viral video on social media has shown the truth behind Indian allegations on Pakistan and the tall claims they make regarding their superiority over their neighbor. An Indian politician can be seen giving “tips” to his party workers on how to lie against Pakistan in order to win the upcoming elections.

In the leaked video, the Former Deputy Chief Minister of Karnataka, K S Eshwarappa, advised BJP party workers to lie to the people if they cannot think of a real story in order to win their hearts and get votes from by rallying up anger against Pakistan.

In the 90-second video, he can be seen suggesting the party workers ‘silly’ ways to win the elections.

You must say that Pakistan never dared to attack India when Vajpayee was the Prime Minister, but when Manmohan Singh became the PM, Indian soldiers were attacked and killed by Pakistan’s army. You must tell people that when Modi became the PM, he killed 10 soldiers of Pakistan. [In order to turn things in your favor] you must spin it like that. Even if you cannot confirm [the legitimacy] of these things, you are aware of the machismo of PM Modi, use that to spin a story — we will see what happens later.

Bluntly violating all ethics of electoral politics and decency, he suggested the workers:

If you sit quietly when people tell you that Manmohan Singh provided great administration when he was PM or when they tell you that Chief Minister Siddaramaiah has done a lot for Dalits, then we will have to end everything and go home.

Other than that, he also accused the state government for the mysterious death of 18-year old “Hindu activist” that, BJP claimed, was killed by “Islamic Jehadists”.

Eshwarappa also held the government accountable for turning Karnataka into Kerala and claimed that Paresh was 20th Hindu activist that was killed in the state.

Over the unprofessional and bizarre suggestions of Eshwarappa, people from both sides of the border responded very straightforwardly.

In fact, Twitteratis from India gave the most aggressive responses over his disgusting “cheating tips”.

Akshay Lanjekar said that people who still support him are a ‘joke’ themselves.

Natarajan revealed that BJP has been lying to them for the past 20 years.

Nothing new to #Kannadigas #BJP has been lying to us and ruining our state for the past 20 years! #BSY #Eshwarappa https://t.co/cn1ULOf343

People confessed that his suggestions were ‘absolutely disgusting’.

ABSOLUTELY DISGUSTING! This and the video of @mepratap saying they’ve been instructed to incite violence shows you that the BJP knows it’s fate in Karnataka so is resorting to behaviour not befitting any democratically elected representative. #BariOluYatre #BJPMission420 https://t.co/xkGOEk8wNu

Another Indian said that the State leaders have learned ‘the art of lying’ from the National leader.