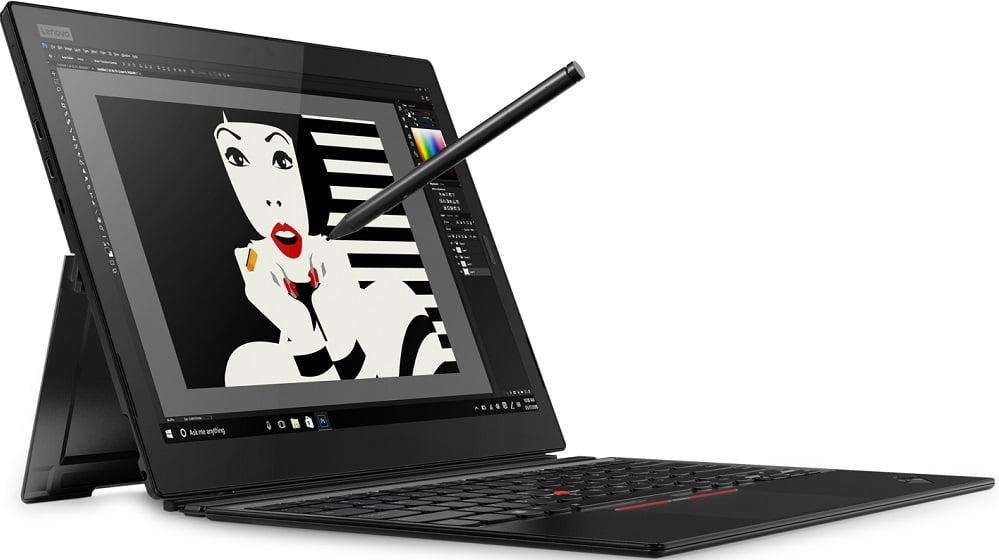 Other than the flagship X1 Carbon and X1 Yoga machines, Lenovo also took the time to announce what is arguably one of the best Windows-based tablets on the market right now: the ThinkPad X1.

Lenovo ThinkPad X1 comes with a 13″ IPS display on the front with a respectable 3K resolution (3000 x 2000 or 277 ppi), which is a big improvement over the WQHD resolution of its predecessor.

It also features a 10-point touchscreen, and supports the Lenovo Pen Pro with 4096 levels of sensitivity. Above the display is an IR sensor and webcam with support for Windows Hello and a fingerprint scanner further enhancing security.

The tablet tips the scales at just under 2 pounds, and is 8.9 mm thick. The keyboard is also redesigned, and is bundled with the tablet alongside a stylus. The design also includes a built-in kickstand.

To justify the hefty price-tag, the ThinkPad X1 tablet comes with a laptop grade 8th gen quad-core Core i5/i7 processor with Intel UHD Graphics 620 instead of the weaker but power efficient Y-series. It is accompanied with up to 16 GB LPDDR3 RAM and up to 1 TB of SSD storage.

Also running here is the desktop version of Windows 10 rather than the 10 S of some of the lower-end machines. Connectivity options include Bluetooth 4.2, Wi-Fi ac and optional LTE Cat.6. There’s no USB-A port, however, there are two USB-C 3.1 ports with Thunderbolt 3.

Battery life is quoted at lasting up to 9.5 hours on a single charge, which should be enough for a tablet of this caliber.

Pricing is set at $1599 for the base model, which is why you need to be precisely in its target market to fully relish the experience that Lenovo provides.