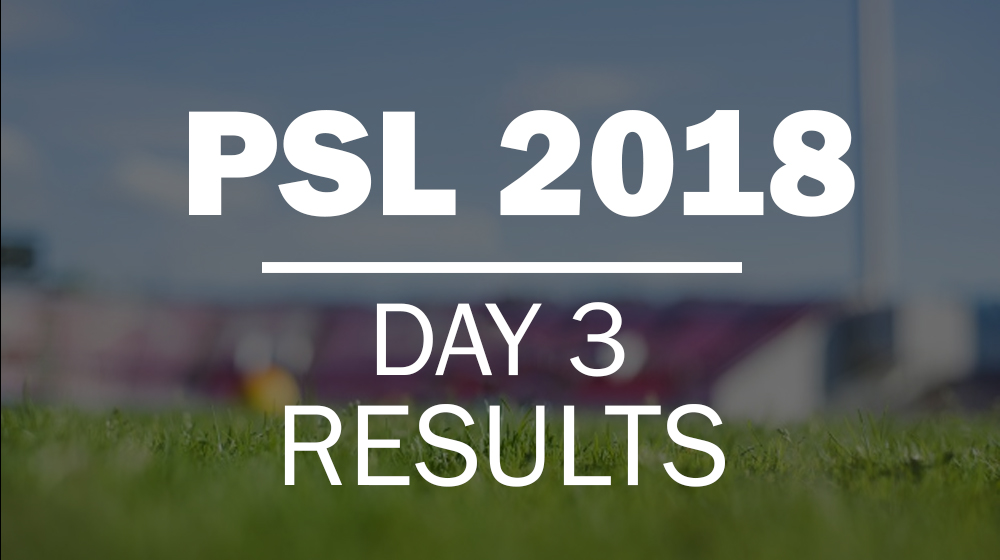 Pakistan Super League 2018’s Day 3 proved to be a day of the emerging stars as Umaid Asif’s 4-for combined with Ibtisam Sheikh’s 3-for rattled Islamabad United in the first match. Mohammad Nawaz’s 2-4 turned out to be the most economical figures ever in the HBL PSL, playing a major role in his side’s victory over Lahore Qalandars.

It was carnage at Dubai International Stadium as Kamran Akmal blasted a 32-ball 53, giving Peshawar a 69 runs opening stand in just 7.3 overs before being dismissed. Scores of 39 by Tamim Iqbal and 30 each by Dwayne Smith and Mohammad Hafeez helped Zalmi put a very challenging total of 176/6 for Islamabad United to chase.

The top order of Islamabad United failed badly as they were four down in the first 4 overs. No batsman managed to score easily as Zalmi kept picking up wickets. The late charge from Faheem (54* from 30) was never going to be enough for United to chase down a big total as they managed 142/9.

It turned out to be a miserable day for United as the bowling duo of youngsters Umaid Asif (4) and Ibtisam Sheikh (3) shared 7 wickets while giving away only 43 in 8 overs.

Last month Umaid Asif tweeted his T20 stats and tagged a few journos to remind franchises what they missed in the PSL draft. He was later picked by Zalmi as a cover for Hasan Ali. Today, he becomes first pacer to take 4 wickets on PSL debut. #PSL2018

Man of the Match: Umaid Asif

Qalandars look well on their way to put up a mammoth total on the board as the openers rushed to 46 in just 3.3 overs before Narine holed out to Rahat Ali. Archer removed Fakhar Zaman in the 5th over and it all fell apart for Qalandars from there on.

Mohammad Nawaz’s most economical spell in the PSL ever (2 wickets for 4 runs in 4 overs) curbed the flow of runs and ultimately led to a huge collapse. Qalandars could not score 119 in their 20 overs.

An opening partnership of 92 seized the match for Quetta Gladiators with ease.

Shane Watson, who got hammered by Sunil Narine in his first over, settled the scores as the Aussie smashed 20 off Narine in the 7th over to bring up his fifty in style; the magician, however, bowled out Watson later.

Man of the Match: Mohammad Nawaz