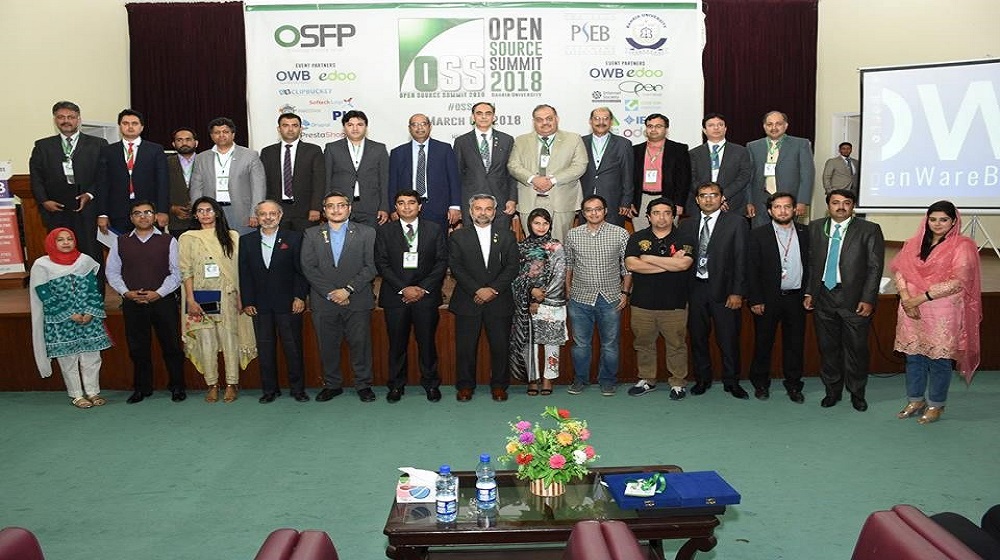 Open Source Foundation of Pakistan (OSFP) organized an enthusiastic and informative 5th Open Source Summit 2018 Pakistan at Bahria University Islamabad on 8th March. For the 1st time, Open Source awards were given to various techies to acknowledge their contributions to Open Source in Pakistan. There were around 500 attendees from industry, academia, government, and students 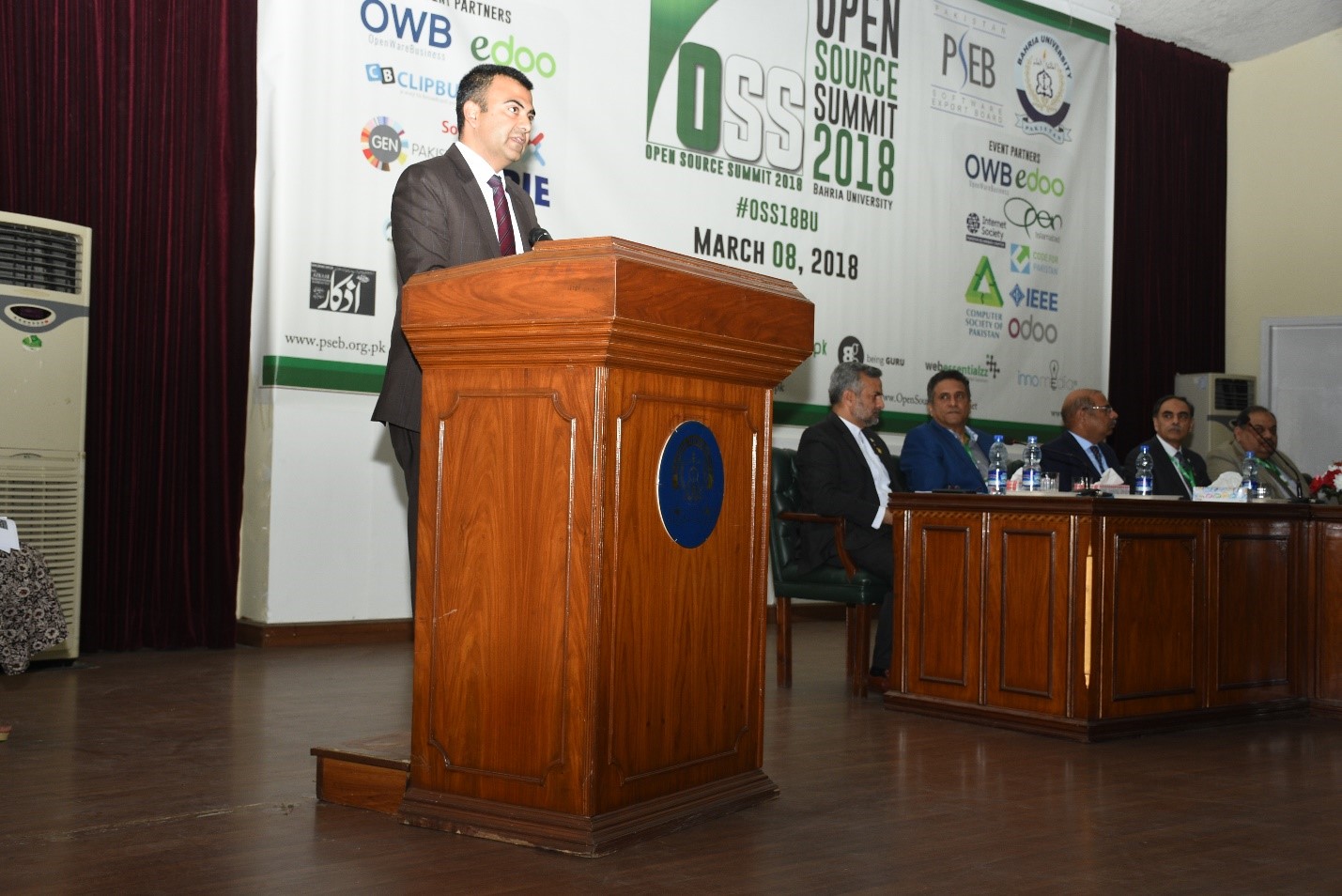 The event started with a welcome address by Dr. Najamul Islam of Bahria University. He said that by hosting this annual event for the 3rd time at Bahria University, it reflects the university’s commitment towards Open Source and industry-academia collaboration. 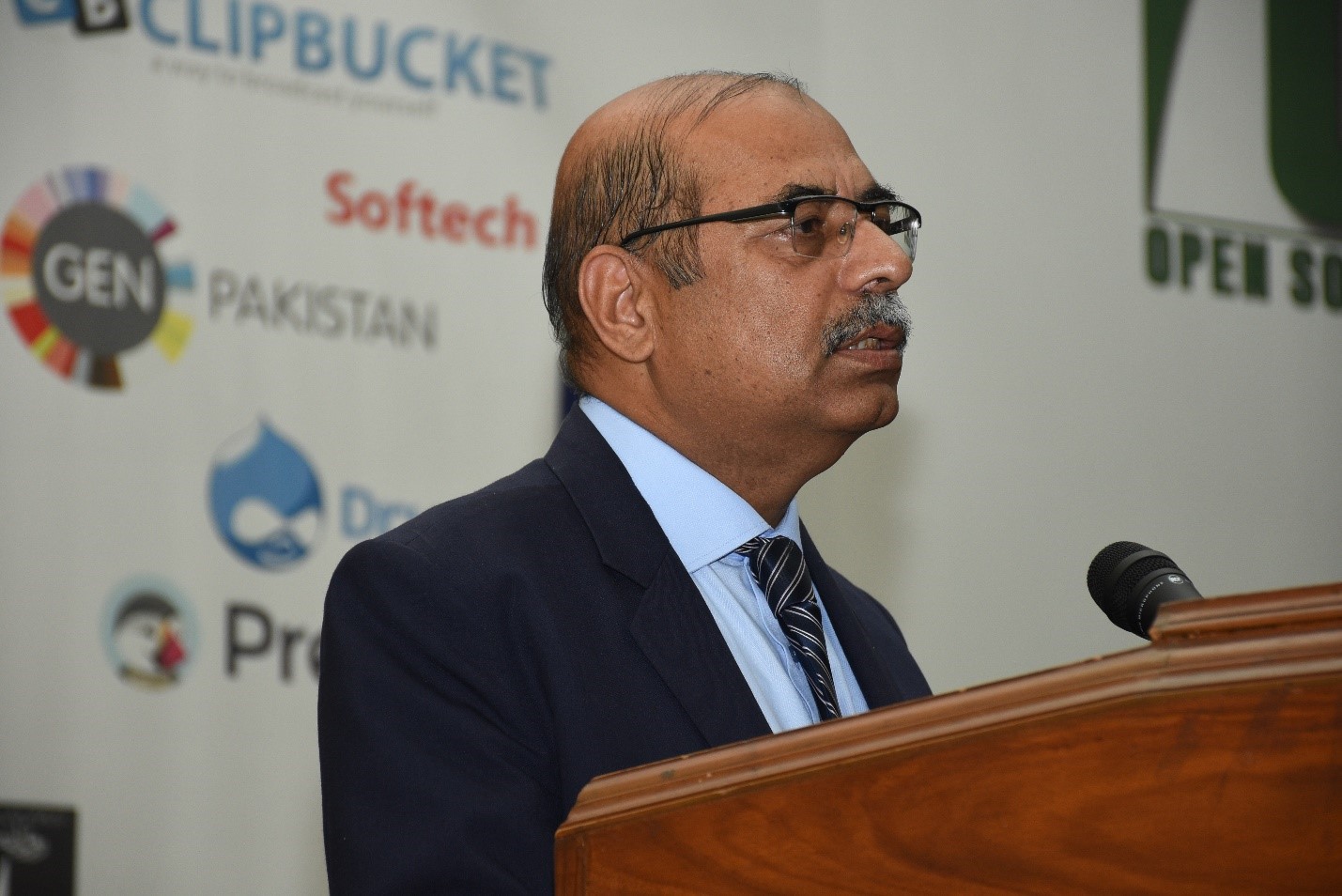 Chief Guest, Dr. Arshad Ali, Executive Director, Higher Education Commission, mentioned that events such as Open Source Summit are excellent for spreading awareness and for creating industry-academia linkages. He also said that universities should utilize open source platforms to build their IT infrastructures in future.

To build Open Source culture in Pakistan, he recommended that OSFP should build a roadmap with future activities and timelines for spreading open source in Pakistan. He said that HEC has allocated Rs. 1.5 billion for National Research programs in universities and open source community can submit research proposals to this program. 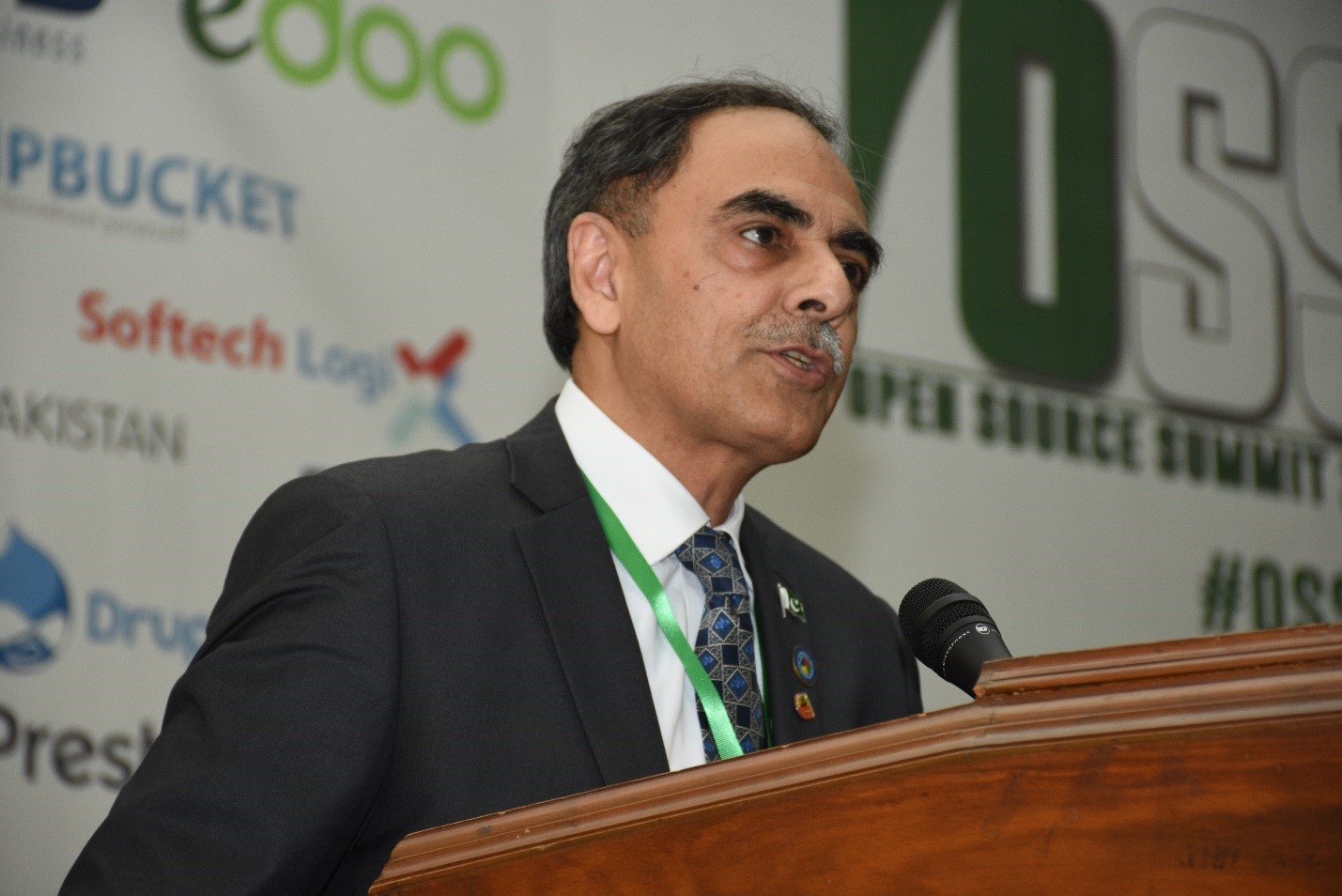 Mr. Salim Rafik, Chairman OSFP discussed various problems in the country and how open source can play a part in resolving these issues. He said that IT departments of government are preferring to use Open Source because the source code is available and they will not have to hire third parties in case of any issues.

He discussed the achievements and role of OSFP in creating awareness about Open Source at both industry and academic level in Pakistan. He said that open source community can contribute 500 million dollars to Pakistan’s economy in the next 5 years. 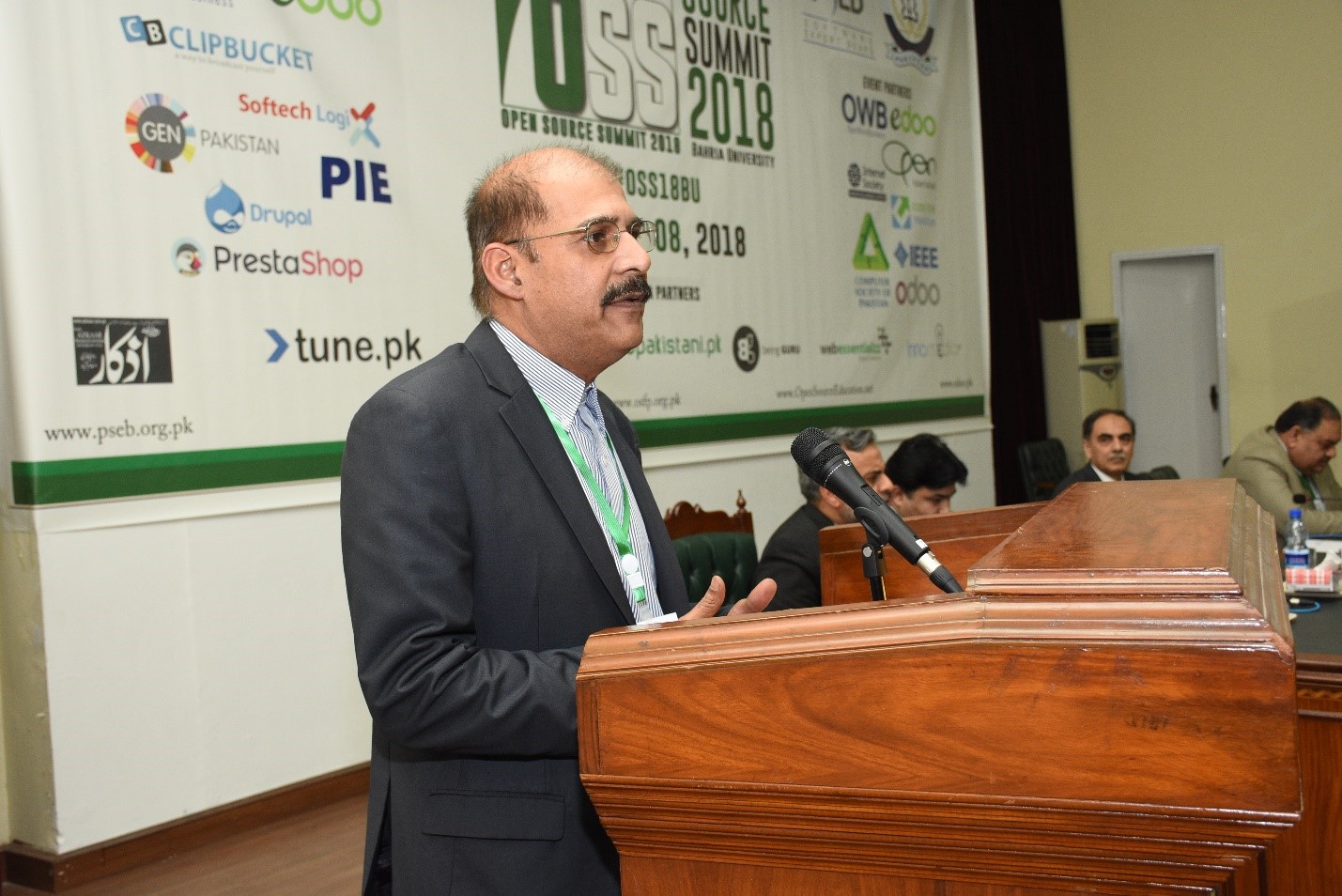 Mr. Ali Abbas Hasani, MD PSEB, said that role of Open Source is inevitable for the progress of Pakistan. He further said that PSEB has been supporting OSFP for 3 years and will continue to support it in the future. 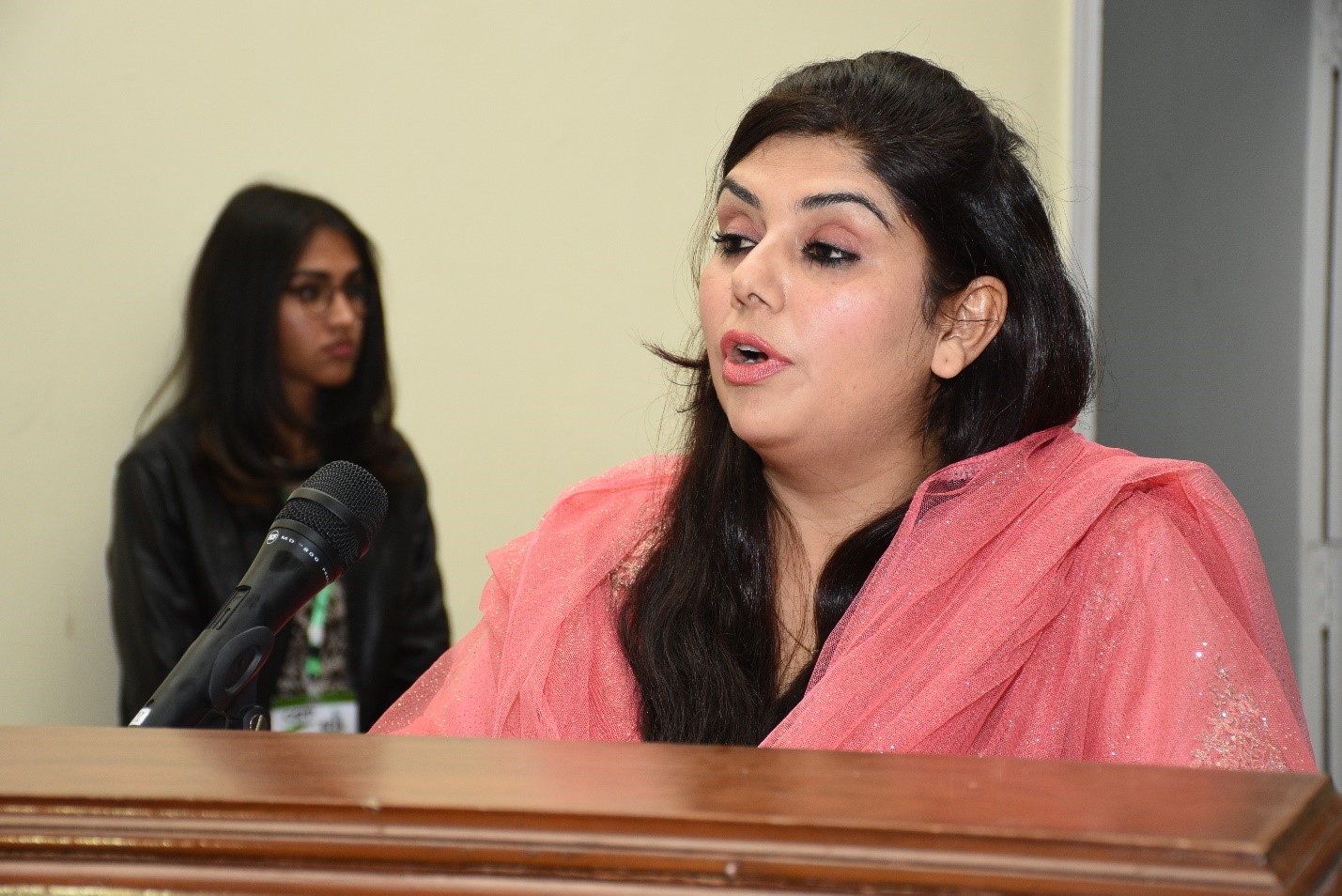 To mark the International Women’s Day, Ms. Ghazala Tanveer from PSEB discussed the role of women in the development of the country. She said that women have to face more challenges today because they have to fulfill two responsibilities, family and profession.

Women should build confidence and make them strong to face these challenges. She further said that women should think about the factors that motivate them and lead to growth. Women should set their life goals and stand firmly. Besides, women should progress by striving and overwhelming hurdles in their life. 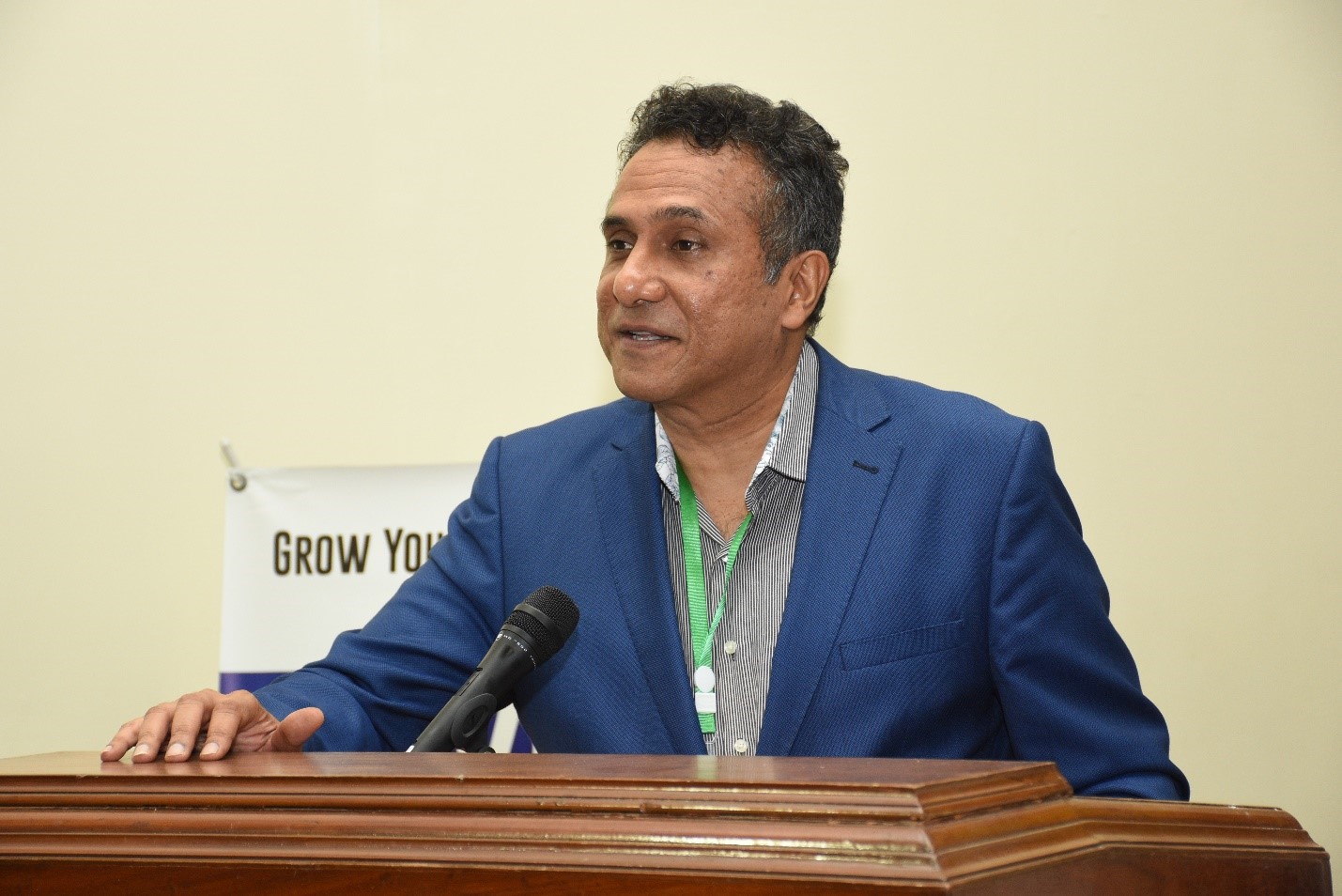 Mr. Yusuf Husain, CEO Ignite mentioned that Open source movement was started in reaction to licensed software for free availability of source code. He discussed the 4th Industrial wave and the importance of innovation and how it has changed the entire world. He encouraged coders to participate in Google Summer of Code program which is a global program focused on bringing more student developers into open source software development. 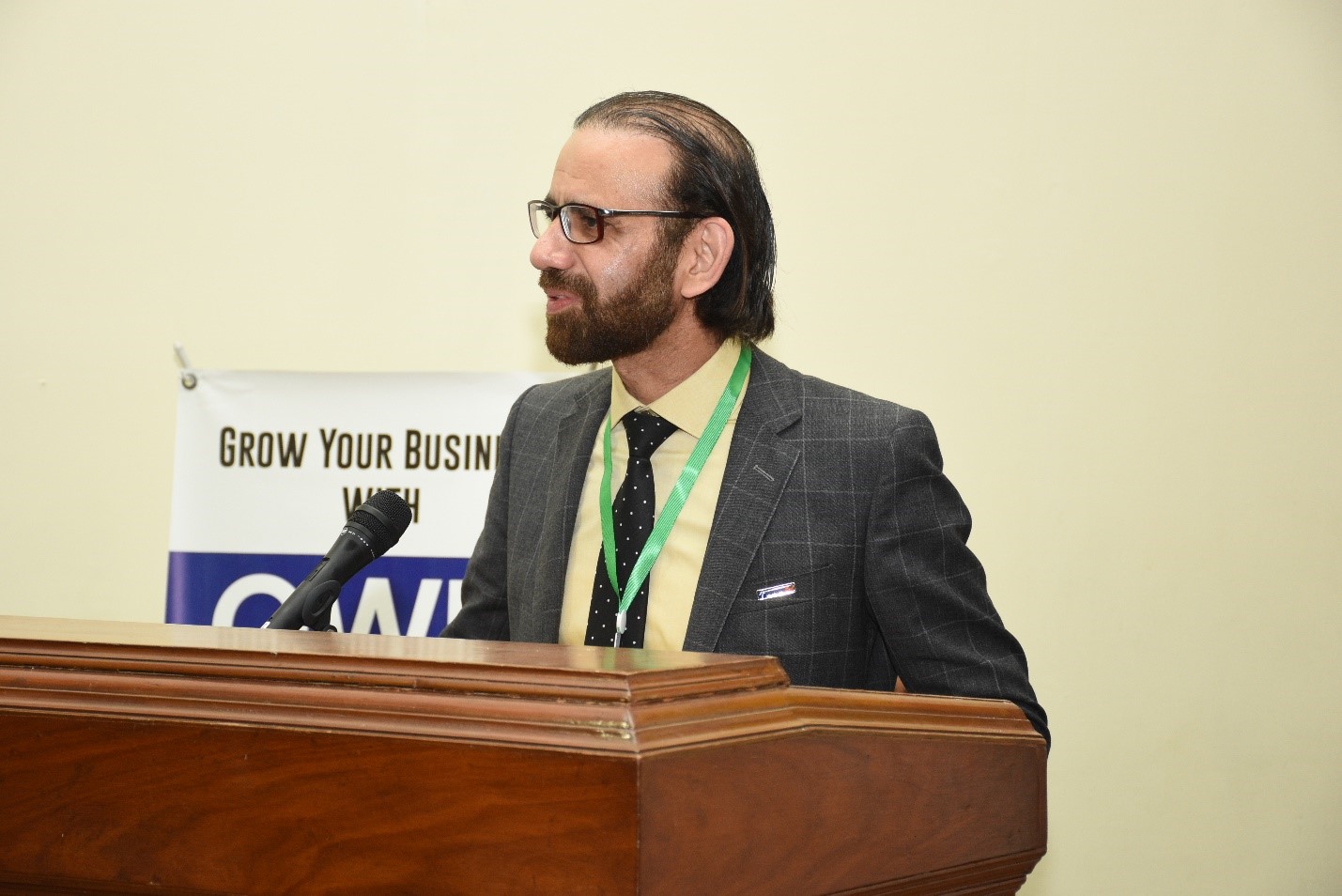 Mr. Wahaj Siraj, CEO Nayatel discussed the importance of entrepreneurship and risk-taking and how it has made USA the global leader in IT. He mentioned that 95% of software at Nayatel is based on open source. 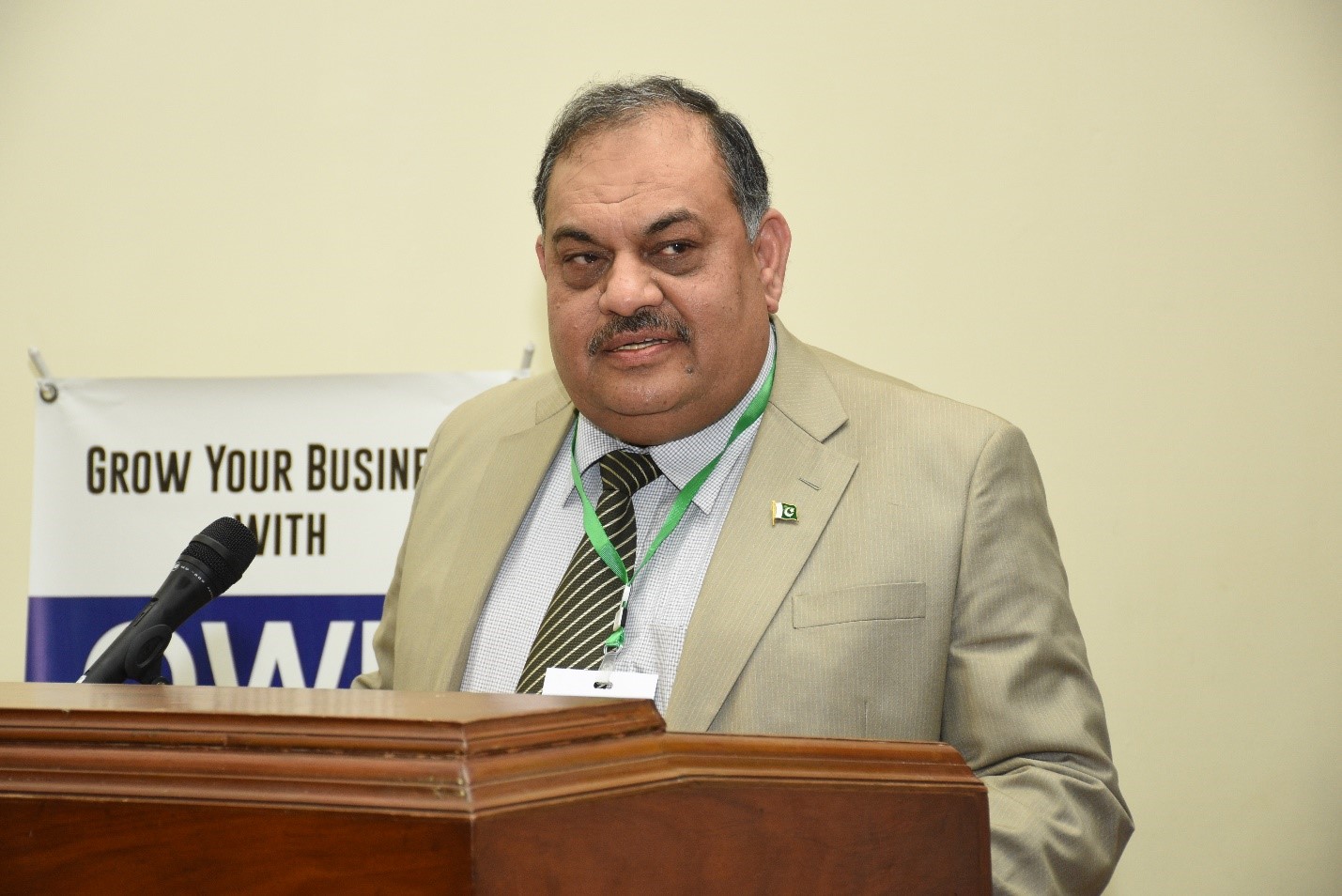 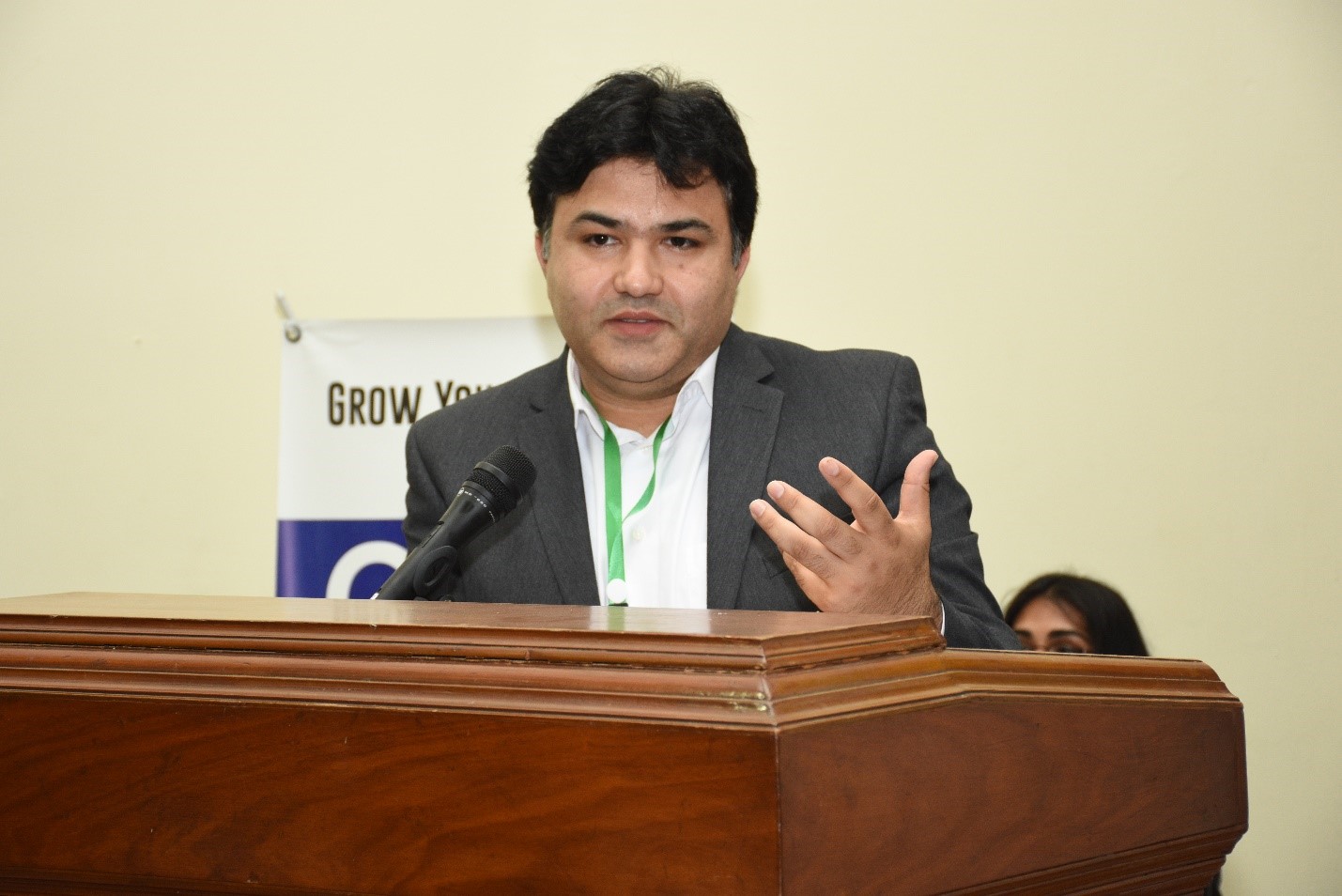 Mr. Barkan Saeed, Chairman [email protected], talked about how Open Source tools benefited him when he started his IT firm many years ago. Also, how Open Source has revolutionized the IT world (Mobile, Website, IoT) over the last decade. 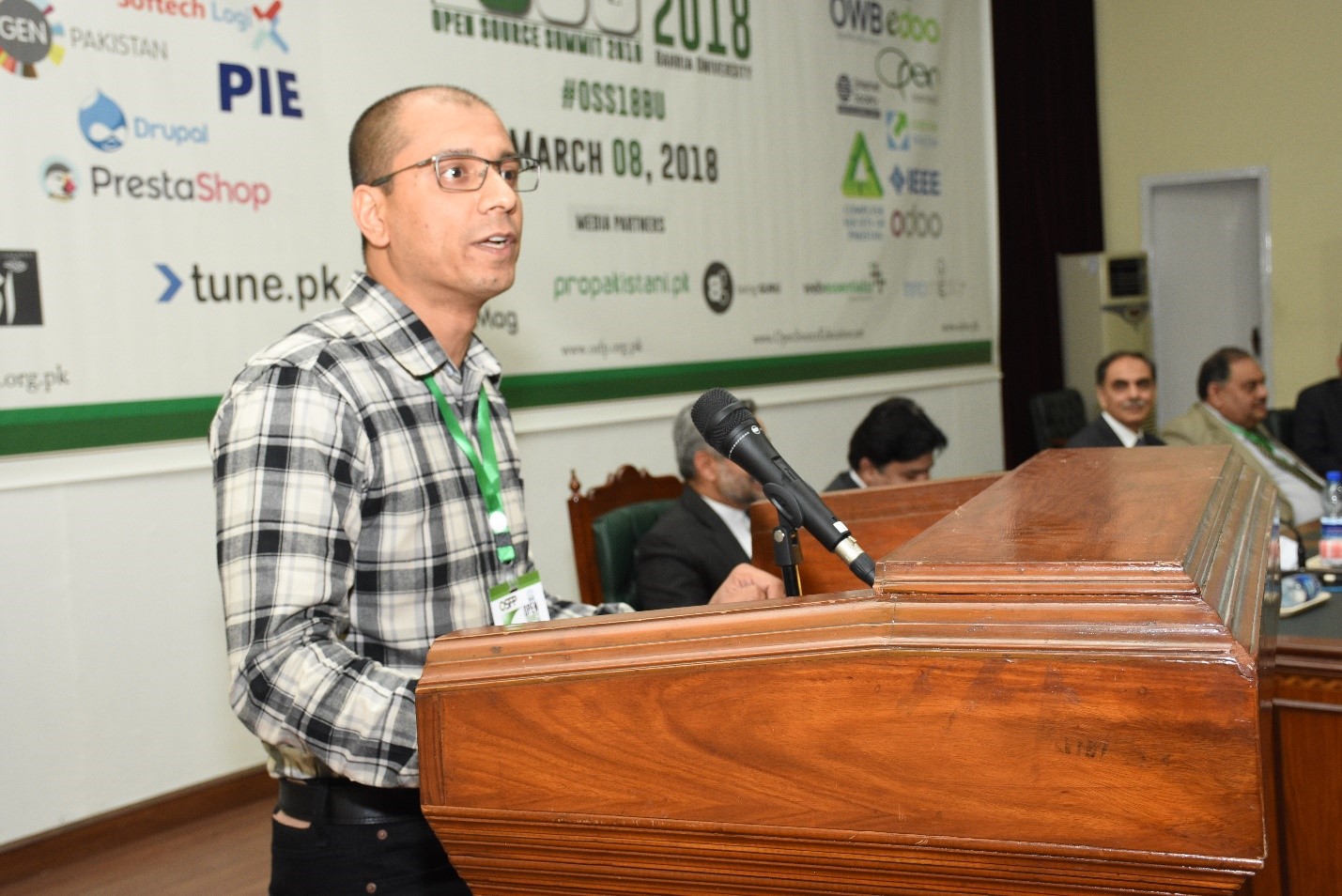 Mr. Umair Shahid, Head of Marketing and Products in 2nd Quadrant, discussed various types of Open Source Licenses and their importance for linking, re-distribution, and modification of the code in open source. 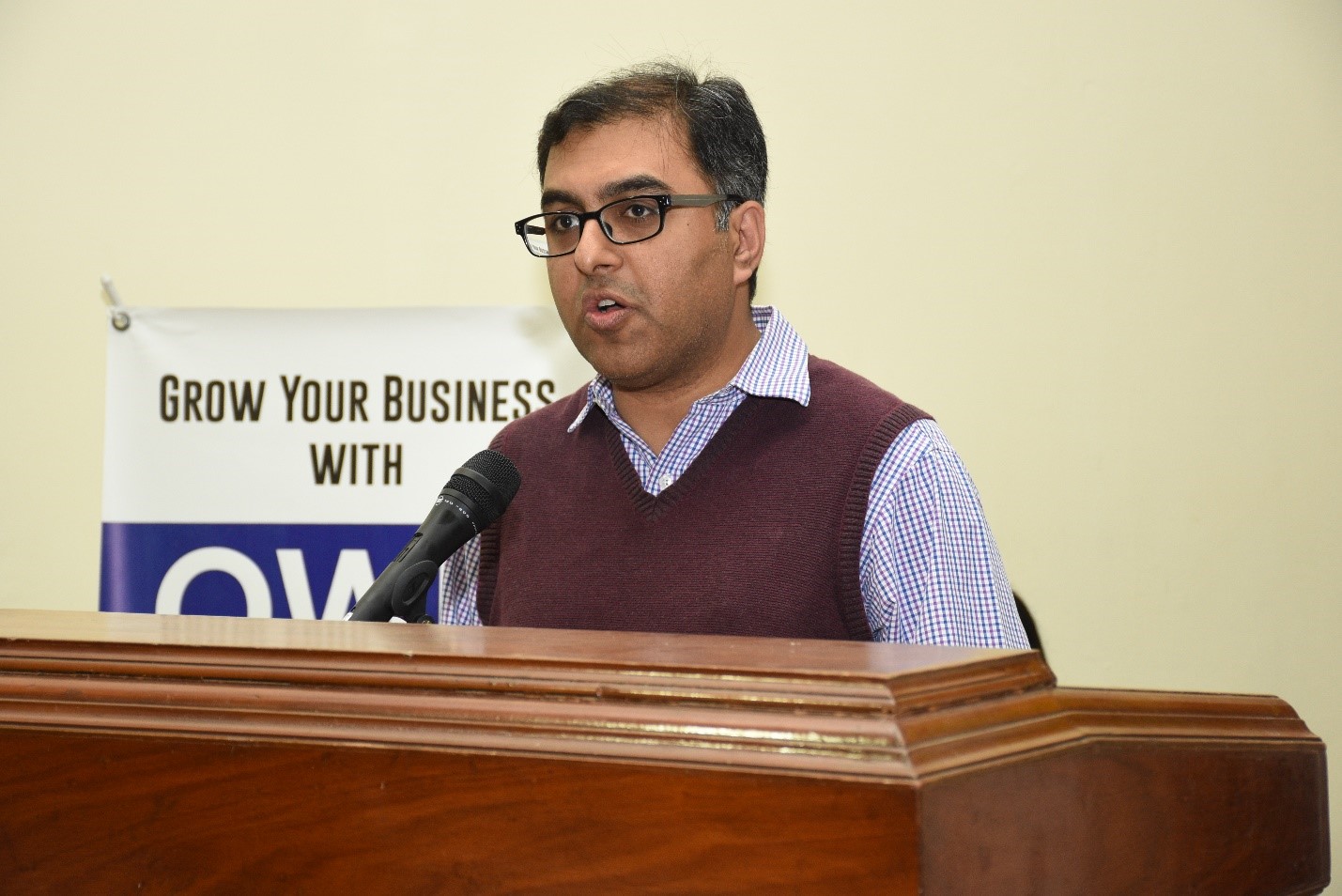 Mr. Asim Ghaffar, President Code For Pakistan, shared how Open Source benefited a project of his organization with Islamabad Government. He said that source code should be opened to all so that everyone can benefit.

For the first time, 1st Open Source awards were given to the following for their contribution to Open Source:

In the afternoon, open source experts belonging to various organizations enlightened the audience with their precious knowledge of open source and its applications.