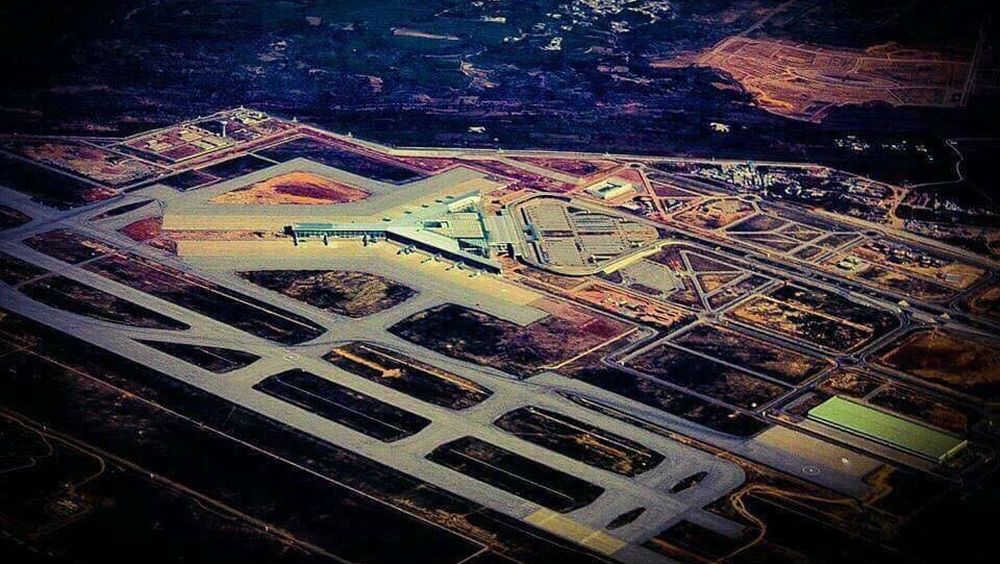 As a frequent traveler and aviation enthusiast, the launch of the new Islamabad International Airport was an eagerly awaited event for me. It was more disbelief than excitement, that the airport finally did open on 3rd of May 2018, with a complete transition of all flights from the old airport by the end of the day.

I headed off to the new airport on the launch day and then took a flight three days later, to get a first-hand experience of this great accomplishment in the country’s history.

Traveling to the airport is perhaps the most difficult part of the whole experience. In Pakistan we are not used to having airports out of the city, almost 45 – 50KM and more than an hour’s drive away. Starting from the F Sectors of Islamabad, at evening rush hour, it took an hour to make it to the airport. The Kashmir Highway, being the only direct road to the new airport from Islamabad, already has heavier than usual traffic.

The route is simple, till you reach the fork for Peshawar Motorway and the Airport, which can be tricky for the first-timers. If you miss this turn, you will find yourself traveling a very long distance to get back on track.

The new section of the road that has been constructed between the motorway interchange and the terminal is quite impressive. With three lanes on each side, that are cordoned off on the sides with barbed wires – the road is wide enough to handle future traffic flows.

One would hope that the housing societies mushrooming on the sides of the road are kept regulated, to prevent the approach road from deteriorating. Barring a few finishing touches and lights that need to come up, I would give full marks to the NHA for the excellent job done on building this road.

Things start getting messy as you approach the main terminal. One would hope that you would no longer have to endure the insanely long queues of the Benazir Bhutto International Airport. However, at the new airport you face not one, but two security queues, which seem slower and worse than the old airport.

After hardly a couple of kilometres, you end up at the second checkpost, which is much narrower. At this point, ASF use their ‘sophisticated’ handheld gadgets to walk around and scan your car. This checkpoint is a huge bottleneck and it took us at least 10 to 15 minutes to cross on all visits.

The ASF seriously needs to streamline the security experience and reconsider the number of checkposts and their locations. I would strongly suggest that passengers keep more than an hour for their journey to the airport, given the travel time and security procedures.

The airport building from a distance, is a jaw-dropping first sight. You feel like you are no longer in Pakistan. It is like any new and modern airport building in the world. Artistically designed, large and welcoming. You feel a sense of pride that we finally have such great development happening.

People can be seen stopping on the road to get out and take pictures of the terminal. The size of the terminal, by local standards, is massive. Lahore and Karachi don’t even come close. The design is modern and attractive and space is ample. Kudos to the teams that have worked hard to design and built it over the last couple of decades.

Parking is no longer a problem, although the parking ticket at the entry can slow things down further and still needs the proper equipment. Unlike Lahore and Karachi, this airport has three levels. If you go to the parking area, you will find yourself at the visitors’ gallery from where you can go up for departures or down for arrivals.

This arrangement has potential to cause issues, as there is just one escalator or a couple of small lifts to take you up or down. Normally passengers have lots of luggage on trolleys at this point, which makes the escalators useless and puts a lot of demand on the lifts, which are insufficient.

There are just two sets of escalators, the rest being regular staircases, which make it difficult to go up or down to the departures and arrivals. On multiple occasions, I saw passengers struggling to figure out where to go.

While I do appreciate the fact that this is a massive project and the first green-field airport in the country, one can however clearly see that the airport has been launched in haste. This can be seen throughout the passenger journey through the building.

The biggest disappointment you have on entry to the visitors’ area is to see a total lack of cleanliness. While the pre-launch photos showed a shiny new terminal, the visitor areas are nowhere close. It seems like the terminal was never cleaned before launch. The floors are obviously dirty, with sweeping marks and dirt very visible. Glass, wherever used, is mostly dirty. Garbage bins are insufficient and look like they have been used as a toilet. And the toilets – though equipped with high-quality fittings, are in a filthy state! 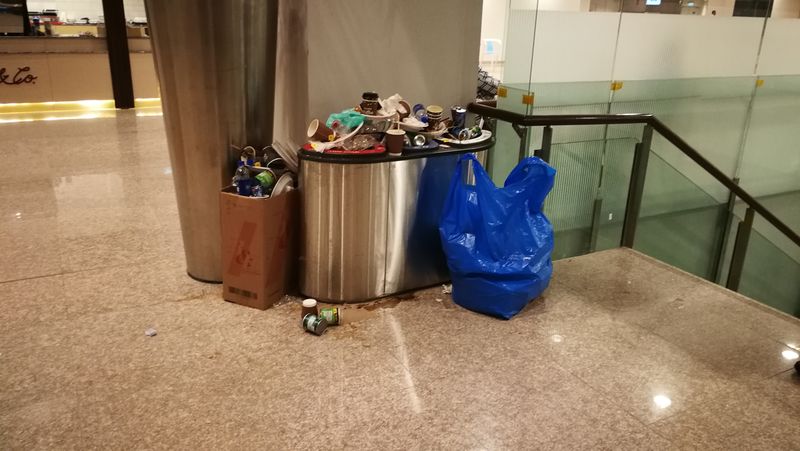 The parking areas, the lawns on the outside, all had piles of garbage, dirt and leftovers from the construction. The lack of cleanliness can also be seen through the main check-in areas, lounges, coffee shops and inside toilets. There is an obvious lack of cleaning staff, as hardly any were seen. The CAA really needs to give the terminal a scrub, urgently, and hire an army of cleaning staff, before things get spoilt for good.

Several things are already broken or not operational. The huge LED signage for the visitors’ gallery is half lit. Broken tiles can be seen in several places and many of the aesthetic elements are still incomplete.

Airline ticket counters, money changers and other facilities are yet to start. A major issue is seating for visitors, as there hardly is any, leading people to squat on the floor all over the place. The flight information display monitors are very few and tiny, making it difficult to find flight information.

The Visitors’ Gallery has a bold and inviting statement ‘Dine, Shop, Play and Wait’ but to get in there is a huge security fuss, with gender discrimination at its best, as women are not allowed to go in yet due to lack of female security officials.

The area is far from ready as only a couple of small shops are operational and there is no reason to go there to wait. However, being airconditioned, compared to the main foyer, this gallery will see lots of people trying to get in as it develops.

I traveled out on an international flight on the night of 5th May, which was the third day of the opening. Trying to get into the International Check-in area was a challenge. The queues were long all the way till the drop off lane. 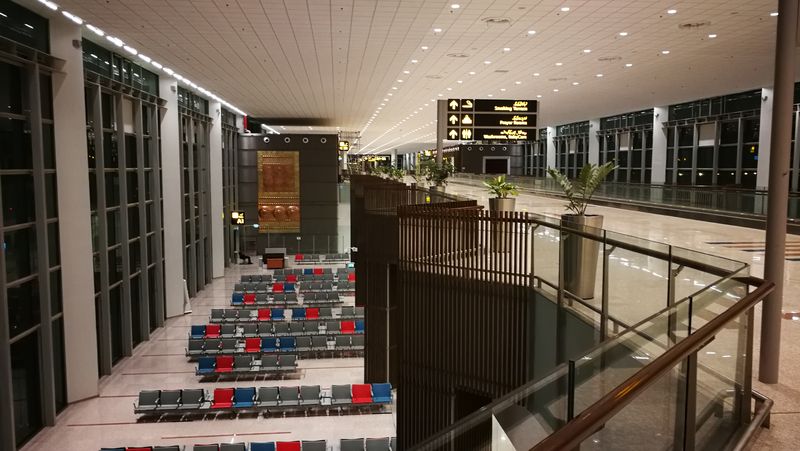 The process of checking tickets, moving into the new airport, has not improved. Once inside, the first security check is, however, quicker and has several machines, which helps. 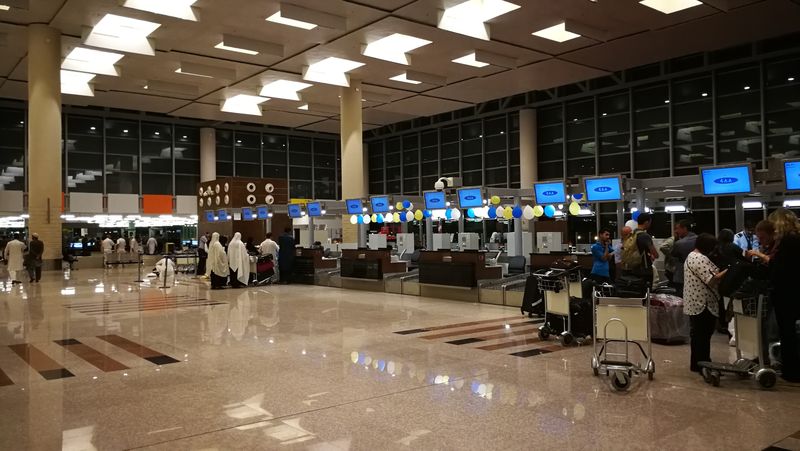 The check-in counters are a welcome site. Set out like modern international airports, there are several rows of counters. However, despite a large number of counters, the utilization seemed low as both Emirates and Qatar Airways were crowded into one row, despite several rows of counters being empty. Business Class counters for both airlines were just one each. The check-in experience can be further improved, by spacing out high-volume carriers in different rows. 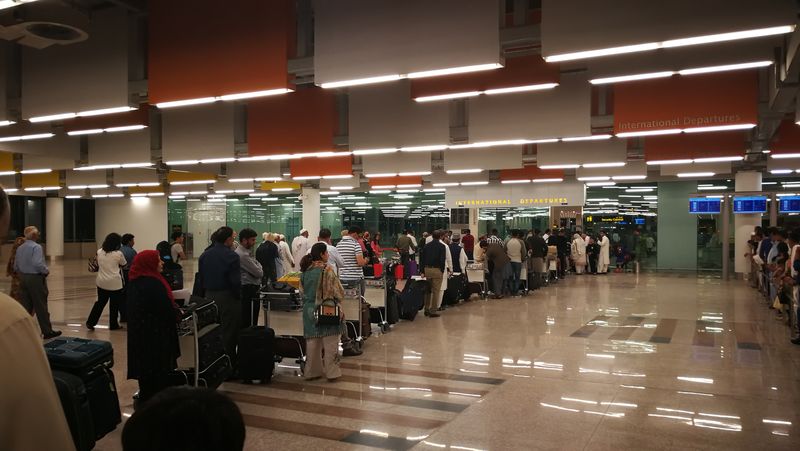 The biggest improvement by far is the immigration counters. They are ample in number, in a much more spacious setting. If the counters are utilized properly, this will remain the best immigration experience amongst all airports in the country. What is still disappointing is the secondary passport check, which has been retained in the new setup. One fails to understand the purpose of this check when all the necessary questions have already been asked at the first one. This process will prove to be a bottleneck in the future and spoil the otherwise good experience. 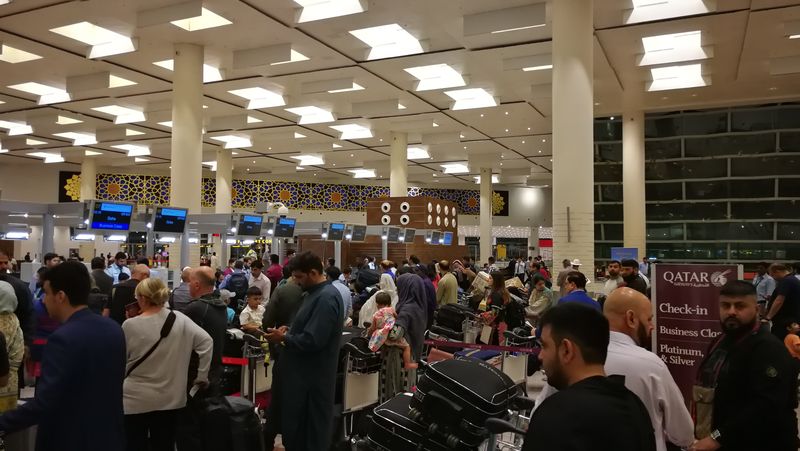 The Duty-Free Shops are yet to come up, however, there are a couple of coffee shops already operational and a large area café area with lots of seating. The CIP lounge is open but does not accept complimentary credit card customers yet. The CIP lounge is very small, but I was told that there is space for other business lounges and these will come up in the future. The main lounge area and gate experience are world-class and very pleasant. The two-tier arrangement, including separate transit passenger access, is what sets this airport apart and is in line with international airport setups. 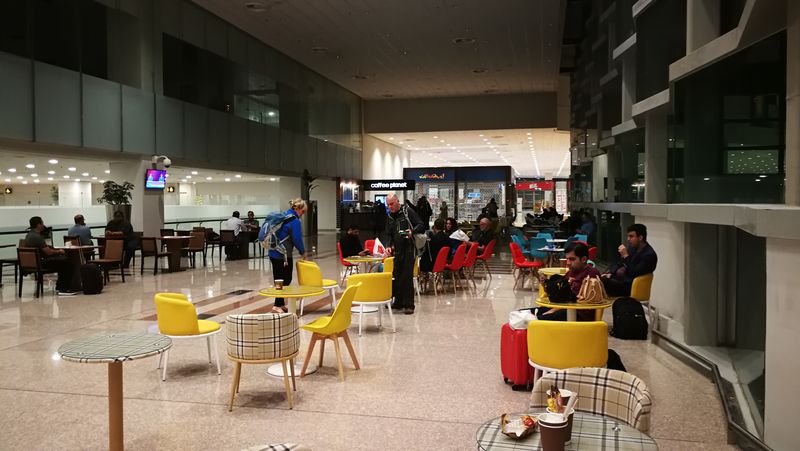 The on-time flight performance since launch has been poor. While I and those I know, personally experienced delays of up to three hours, Flight Radar 24 data clearly shows things have not improved to date. Luggage conveyor belts have been reported as a big issue, both for departures and arrivals. These are not functioning properly and have caused massive delays.

Lack of preparedness, training and staff shortage are clear problems. One can insist these are teething issues, but having witnessed the smooth launch of the Hammad International Airport in Doha, Qatar, I disagree that these issues are normal.

One would hope that the operational side of things, especially critical operations like aircraft fuelling have been tested for quality and safety. Other services such as in-flight meals, critical to the health of passengers and crew, must be handled with utmost care.

Most importantly, CAA should conduct safety and fire drills as soon as possible to ensure that staff is equipped to deal with emergencies, as one small incident can have major consequences. With the airport now ‘fully’ operational, one can expect the pressure to be on to fix the outstanding issues, which may never have gotten resolved had the airport not opened.

To end on a positive note, this airport is a huge step forward for the city and the country. It is a step into the future and once properly functioning, will go a long way to project a positive image of the country. Let’s hope that it helps bring back the many International airlines that do not come to Pakistan anymore and contributes to the development of tourism and transit industry.

If you are flying anytime soon from Islamabad International, do share your views and happy flying!