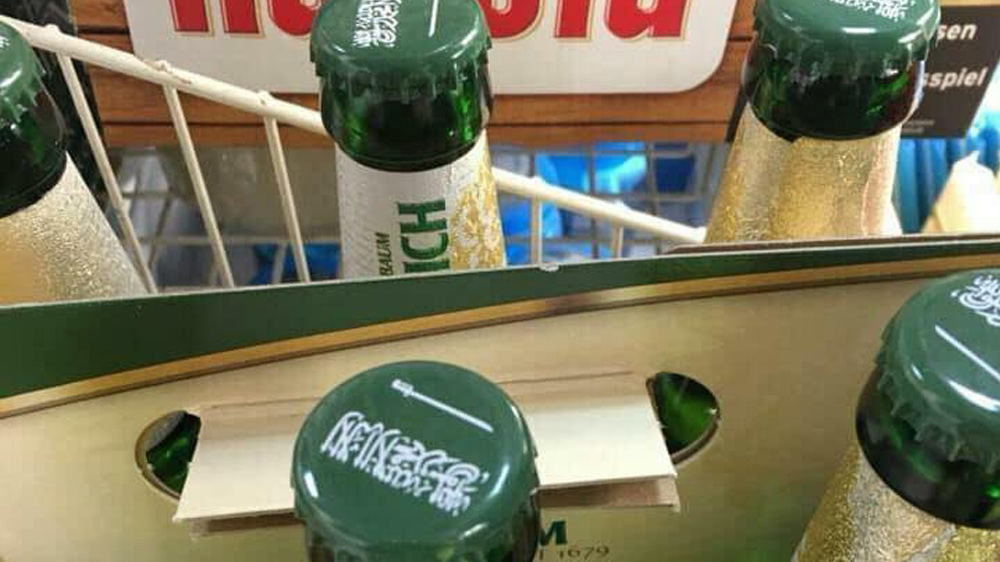 German brewery got into hot waters with its latest campaign for FIFA World Cup 2018.

German alcoholic drinks company, Eichbaum, found itself at the center of a controversy after it used the Saudi Arabian flag in its beer bottles for an upcoming promotion.

The brewery used the Saudi flag as part of its FIFA 2018 World Cup promotion, which will be held in Russia later this year. As any Muslim knows, the Saudi Arabian flag features the Kalma. Eichbaum’s use of the Saudi Arabian flag has understandably sparked outrage and prompted calls for the company to apologize and issue a product recall.

The news went viral over social media, with many Muslims sharing the image asking for these bottles to be removed from the shops:

Users on social media united against the decision taken by the company and put forth logical claims.

Some people decided to raise the issue via proper channels, hoping to prod the German brewery into admitting its mistake:

It seems that after a lot of social media pressure, as well as official protests by the Saudi authorities themselves, Eichbaum realized that it had made a terrible mistake.

On May 11, both Eichbaum and the German Embassy in Riyadh responded to this issue as well. They alleged that the brewery didn’t intend to hurt anyone’s feelings and that they had printed bottle caps for all the 32 nations that are participating in the World Cup this year in Russia.

For many years, Eichbaum has been printing the flags of the participating 32 football nations on its bottle caps on the occasion of the football World Cup. In case we have inadvertently offended you, we must formally apologize for this.

After the publication of their apology, the German alcoholic drinks maker announced that it is stopping production on bottle caps that include the Saudi flag on them. Additionally, the company said that it is taking measures to withdrawing all bottles containing the offensive material from all markets where it operates.

The German Embassy in Riyadh regrets the unfortunate incident in which the German company Eichbaum used the Saudi flag in a PR campaign linked to the FIFA World Championship 2018 in Russia, and is welcoming the swift and unequivocal action taken by the company.
Eichbaum did1/2 pic.twitter.com/I0qHk1g7Aw

It has been argued as an oversight but considering what the content on Saudi Arabian flag means to Muslims, the reaction is justified.

Turns out they've already been informed and they've apologised for the same. They printed bottle caps with flags of all 32 World Cup nations and didn't know what the flag of Saudi meant… https://t.co/3493cZXzrq

The embassy further said that Germany is home to 5 million Muslims and that they are very much part of its rich and vibrant community.