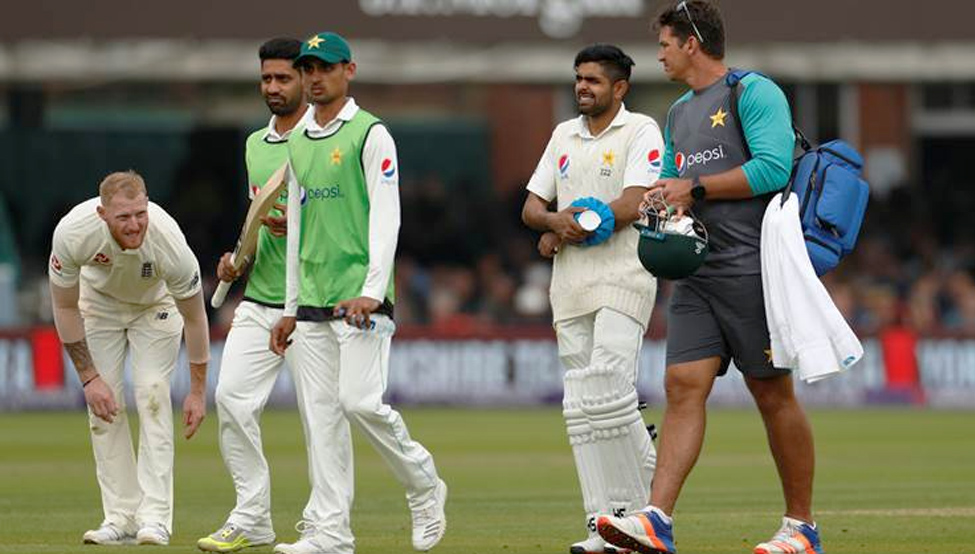 Pakistan camp has been hit with a massive blow as Babar Azam is ruled out of the remainder of the Test match series with England with a fractured forearm.

Babar Azam was batting on 68 in the 1st innings of the opening Test match and faced a tricky delivery from Ben Stokes, who had been troublesome the entire day. After failing to keep his eyes on the ball, it struck Babar on his forearm and he was immediately retired hurt.

Cliff Deacon, the Pakistan physiotherapist, has said that he expects Babar to be out of action for at least 4 to 6 weeks.

We decided we were going to do a precautionary x-ray at the end of the day’s play. Unfortunately, the x-ray confirmed there was a fracture. The fracture’s in the forearm, it’s one of the two bones in the forearm in the distal third of the arm, just above the wrist. That’s why he couldn’t hold his bat properly.

The Pakistan management has decided to not call any reinforcement as the squad already includes Usman Salahuddin, Fakhar Zaman and Sami Aslam as spare specialist batsmen.

It is a huge loss for Pakistan as Babar looked in good form and was tipped to take the series by storm. He has really stood out for Pakistan in limited-over format as well, amassing an average of 53.00 and 51.11 in T20Is and ODIs.

Although his Test career has not reached any peak as of yet, he averaged just under 25 in Tests prior to this series, but he has been backed by likes of Younis Khan and Misbah-ul-Haq to lead Pakistan to many more victories in the future.