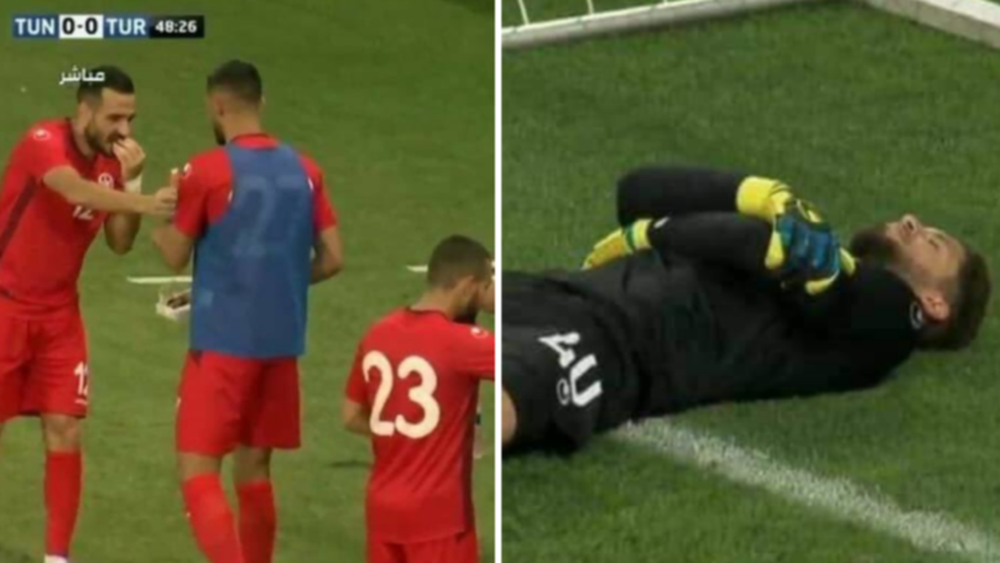 Tunisia has played both of their pre-world cup friendlies while keeping fasts.

The Tunisia national football team has found a unique way of breaking their fasts on the field. The team is currently playing the pre-World Cup friendlies during the holy month of Ramzan. According to reports, the players have played both friendly matches so far while keeping their fasts.

The Iftar time, when Muslims must break their fasts, fell during the playing time in both matches. The team developed an understanding with their goalkeeper that he will go down “injured” when the Iftar time approaches.

So, Tunisia kind of took advantage of this rule and asked their keeper to go down. The keeper, in both games, lied down and received the “medical treatment” as the whole team broke their fasts.

It happened in the first game vs the European champions Portugal on 29th May. Tunisia’s goalkeeper – Mouez Hassen – went down in the 58th minute, the time for Iftar. The rest of the team rushed towards the sideline to grab some dates and energy drinks and broke their fasts. The goalkeeper was fasting as well so he was given the same food by the medical team attending to him.

Fun fact:
Tunisian National team has played the last two friendlies while fasting. So, whenever the time comes to break Fast. The players have an agreement that the GK would go down so they can get a moment to drink some water and get something to eat 😂😂#Ramadan #tunisia pic.twitter.com/4Rgz380ukW

Tunisia was trailing 2-1 against Portugal before the 58th minute. After getting pumped up and energized, the team scored an equalizer after just 6 minutes and held the opposition off at the same score after fulltime.

The second fake-injury-iftar-break routine came against Turkey. The Tunisian goalie lay flat in the 49th minute as the Iftar time approached. The rest of the team rushed to the touchline and grabbed a few dates and drinks. This match ended up as a 2-2 draw as well so safe to say Tunisia is enjoying eventful World Cup friendlies.

The African country will begin its World Cup campaign on June 18 against the Three Lions. Tunisia will play the World Cup for the first time after 2006. The team is in Group G of the 2018 FIFA World Cup, up against Belgium, Panama, and England.