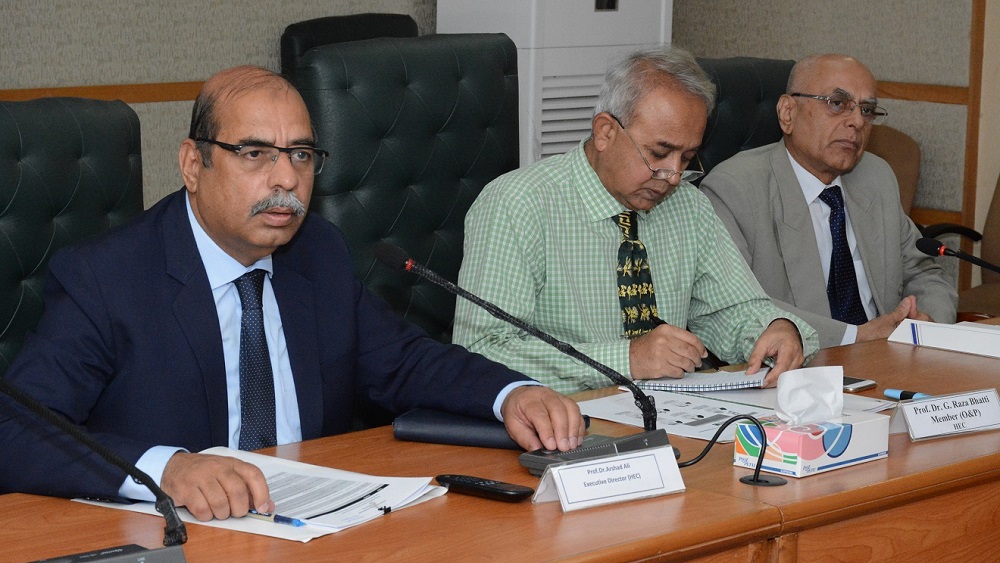 The Higher Education Commission (HEC), Pakistan organized a consultative meeting of a working group of 15 universities to deliberate on UI GreenMetric World University Ranking on the World Environment Day 2018 on Tuesday to introduce the concept of Green Campus in Pakistani universities.

The consultative meeting was held to draw the attention of the higher education institutions of the country to look and self-assess their policies in relation to the efforts for combatting global climate change.

The initiative of Universitas Indonesia (UI) for ranking of universities across the world on sustainability was highly appreciated and the need to maximize the participation of Pakistani universities was realised in the upcoming rankings.

It was agreed to organize a National Workshop on July 9, 2018, in collaboration with UI GreenMetic World University Ranking and all the universities of Pakistan will be invited to participate.

Speaking on the occasion, Dr. Arshad Ali appreciated the concept of Universitas Indonesia with a focus on sustainability at campuses. He stressed the need for adopting the concept in Pakistani higher education institutions.

He said HEC will set up a Green Office, the main coordinating unit that will coordinate with the higher education institutions of Pakistan. He maintained that the concept may help sort out a solution to the water crisis prevailing in Pakistan and other climate change challenges.

In his remarks, Dr. G. Raza Bhatti highlighted the significance of the theme of World Environment Day 2018 i.e., “Beat the Plastic Pollution”. He said the hazards of plastic use in daily life need to be disseminated so that the young generation may not only refuse the use of plastics but can also influence their families to stop the use of plastic for safer and healthier living.

Mr. Naveed Shah, Director, Monitoring and Evaluation (M&E), HEC, and National Coordinator for UIGMWUR in Pakistan delivered a detailed presentation on the concept of this ranking system which is based on the indicators viz. Setting and Infrastructure, Energy and Climate Change, Waste, Water, Transportation, and Education.

In the face of global challenges such as climate change, shortage of water and energy, pollution, population, pandemic and public health, the UI GreenMetric World University Ranking is an initiative taken by Universitas Indonesia (UI) to measure campus sustainability efforts.

This step has brought together hundreds of universities across the world in implementing eco-friendly policies and managing behavioral change in the academic community at respective institutes.