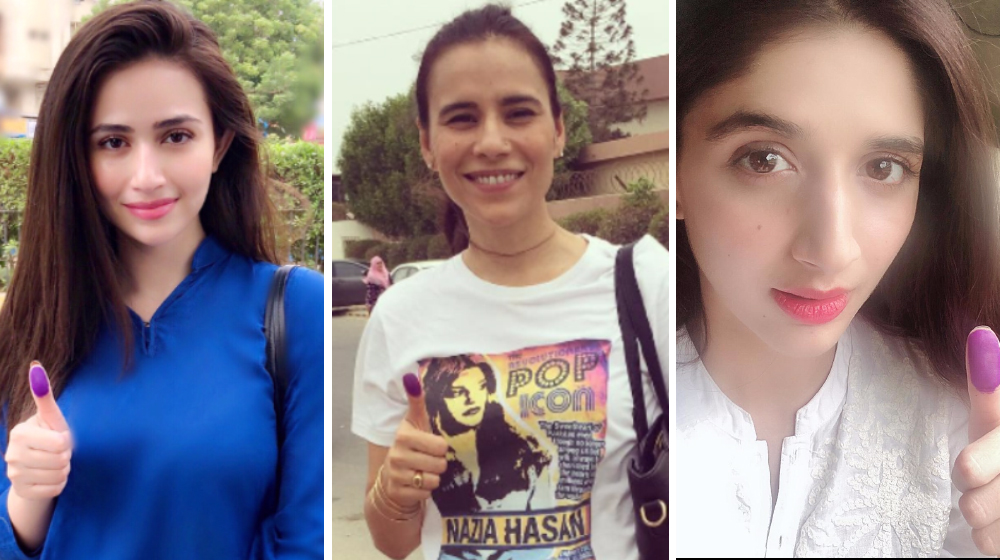 People voted for a change and it seems like Imran Khan will be the next Prime Minister of Pakistan. The agenda presented by PTI has managed to move the voters as the political struggles of Imran Khan, following a successful cricket career, are finally paying off.

Most of the celebrities showed faith in Imran Khan’s ideology and cast their votes for the change.

Getting that tingling feeling in my tummy ! Everything’s about to change forever InshAllah ! For the better only so proud of every single one of you out there who voted. Know your power you did it !

And there he does it again!! Fingers crossed for better times to come #elections #pakistan #imrankhan #nayapakistan #fingerscrossed https://t.co/xF5x8Rd2dI

Samina Peerzada congratulated the Kaptaan on his sweeping victory.

The famous singer, Farhan Saeed, who was pretty vocal about his support for Imran Khan, thanked the Almighty for the results.

Adnan Malik was also moved by the genuineness of Khan’s speech.

What a heartfelt, conciliatory and mature speech by #imrankhan tonight. (You’ve come a long way since ‘92 skipper!) I just landed in The UK and saw social media responding so positively to it. I watched it on my uber out of the airport and my heart swelled at the genuineness of his intention to help the poor, the needy and the under- represented. He spoke of a government that will make policies with the most under privileged in mind, he spoke of peace with our neighbours, gave due attention to the suffering of the people of Baluchistan, and had a message of peace, justice and accountability. His tone was refreshingly non slogany, and nor was there any gloating. He presented government as something that belongs to the people and is not the domain of a select few. It’s almost as if we all need to roll up our sleeves and get to work, together. As one nation. I pray that he has the strength, support and maturity to fulfil his party’s mandate. I feel positive about Pakistan after a long time. Let’s hope this feeling lasts. #pakistanzindabad 🇵🇰

Urwa Hocane was teary-eyed after the famous win.

25th July 2018 and history has been made !!! So many mixed emotions, i am teary eyed and my heart is bursting with gratitude – Ya Allah Tera Shukar! Yeh qoum jaag gai aur ab issay koi nahi rok sakta!❤️🇵🇰#PrimeMinisterImranKhan @ImranKhanPTI @PTIofficial #ElectionPakisntan2018 pic.twitter.com/S3LFy1vs1k

What do you think about Imran Khan’s win in the General Elections 2018?