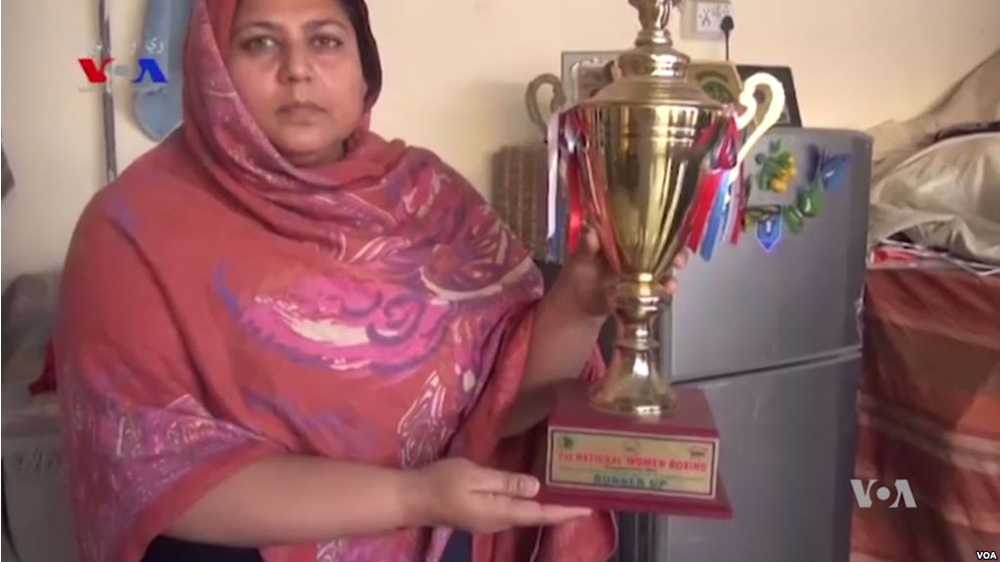 In our male-dominated society, the lack of strong female role models means that more and more women are consigned to tending to their households. Shahnawaz Kanwal, is not one of them.

The Peshawar-born Kanwal comes from a family of boxers, and it just so happens that she knows how to punch a throw ( or several). Not only that, but she is also considered as the one and only certified international female boxing coach in Pakistan.

Kanwal is a former professional boxer herself, in fact, a 3-star national boxer. As the only female coach registered with the Pakistan Boxing Federation, she has now made it her life’s mission to train scores of girls in the sport.

How did she get into boxing? Apart from the fact that her brothers are also boxers, she credits her husband for training her as a boxer.

“My husband, taught me as his student. He showed me how to box,” she said. “I was a trained boxer. I learned boxing for two years, my husband gave me all of my training.”

That training seems to have paid off. Kanwal and her husband started the first training camp for female boxers in Peshawar. She says that the girls that she trained have gone on to win a couple of bronze medals at the South Asian Games for Pakistan, with one of the medalists from KP and another from Multan.

To teach students, Shahnawaz drives around the countryside in a vehicle that has been repurposed with a portable boxing ring. This way she can teach aspiring girls from far-flung areas, hoping to open up a world of opportunities for them.

Meet Shahnaz Kamal, the 1st three stars Boxing Coach from Peshawar who’s running an academy in Peshawar in a rented house to prepare her students for international games. pic.twitter.com/As9ldLeDbb

Despite her success as a female boxing coach, challenges remain. Kanwal laments the fact that the government isn’t interested in promoting this sport. However, her own love of the game has compelled her to give girls in her community and from all over Pakistan a chance to shine.

When asked about why she teaches boxing, and that too in a society that is traditionally conservative, this is what she had to say:

If I had a say, I would train all girls in boxing for self-defense. Our society deals with a lot of problems concerning women. I am not sure why parents think that girls should not box.

Kanwal’s husband also supports her, “This is a good path. Sports is a good path, it’s the best. We are on a positive path, Allahumdullilah (thank God), we are not on a negative path. There is no shame in it, or feeling bad about it. Nor do we care what other people think.”