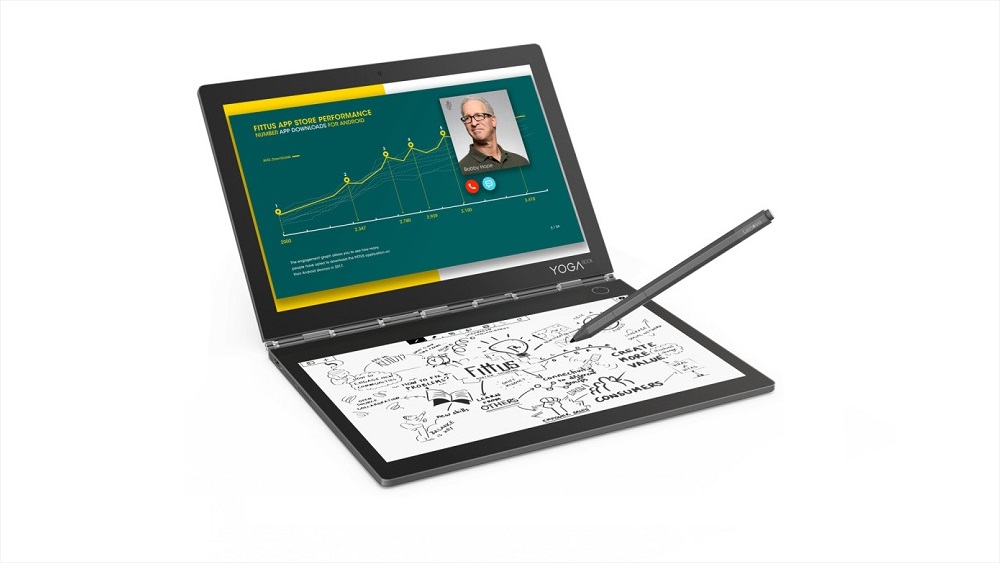 The Yoga Book is back, better than ever.

Lenovo is updating the original Yoga Book of 2016, which came with a touch-sensitive bottom-half, to a system which now comes with two displays, with the second one being e-ink.

Like other Lenovo Yoga machines, the design here takes center stage. It is under 0.4-inch thick, weighs 1.71 lbs and has the same 360-degree “watch-band” hinge (pictured below) which we’ve come to admire in Yoga convertibles by now.

The laptop also pops open by knocking the top twice, with accelerometer detecting the knock and then prompting the magnets and shape shifting materials to open up the Yoga Book.

The e-ink display too doubles as a keyboard, with haptic feedback and animations accompanying each touch. It also supports an optional Wacom stylus with 4096 pressure sensitivity levels, though, there is no slot to store it.

Unlike the last model, which came with either Android or Windows, Lenovo is only releasing the Yoga Book this year with Windows 10 pre-installed.

There are two USB-C ports for connectivity, both of which can charge the laptop. Battery life is said to last 8.6 hours on a single charge.

Lastly, the refinements here mean that the pricing has taken a massive jump too, from $550 for the Windows version in 2016, to $999 now. That might be a bit too close for comfort with some of the other Windows laptops, though, this generation still makes more sense than before.