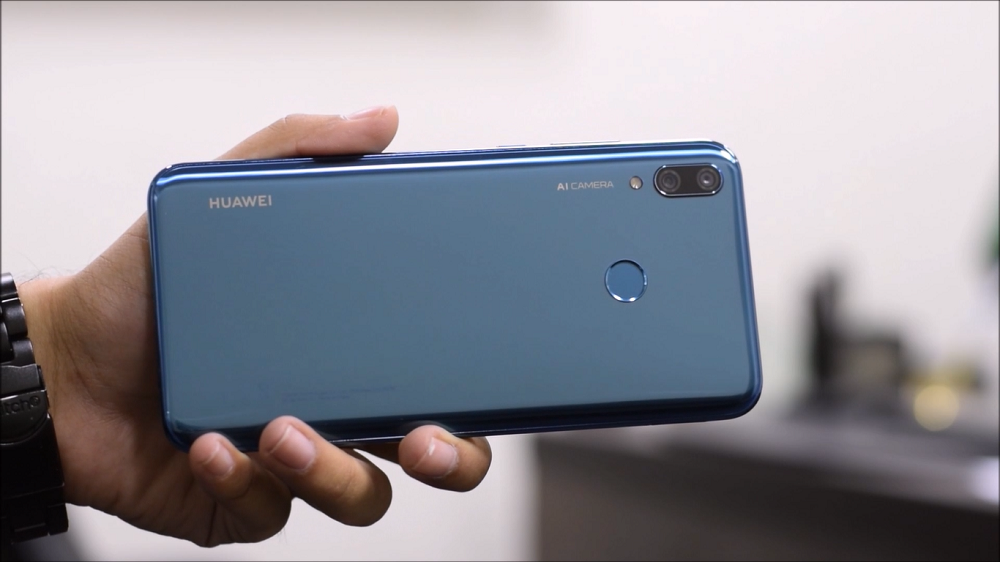 Huawei’s Y-series has always targeted budget consumers and has always had a lower price point compared to other Huawei smartphones. This year the Y9 2019 comes in at a price of Rs. 37,999. That is not mid-range pricing, so does it at least have the specifications to justify its price?

We got our hands on the Y9 2019 to find out exactly that. We’ve already unboxed the phone on Facebook Live so it’s time now to dive into the full review of the device.

Unlike other upper-midrange Huawei phones we’ve reviewed so far, Y9 2019 doesn’t feature a glass sandwich design. It makes do with a plastic back, which is made to look like glass and feels fragile when you hold it in your hand.

There’s no USB Type-C port on the Y9 2019, but we’ve come to accept it as a reality that Huawei will only use microUSB ports for its mid-rangers.

The power button and volume rocker on the side of the phone are a bit too close but good design choice saves the day here. The power button is textured and you can easily tell that you’re pressing the volume buttons or the power button, making things less confusing.

Its display is massive, with a 6.5″ IPS Full HD+ (1080 x 2340) resolution panel and a 19.5:9 aspect ratio, thanks to the notch at the top. Viewing angles were good and you won’t have any problems using the display outdoors in direct sunlight. However, the display is a bit on the reflective side.

The bezels aren’t all that thin, which make the phone a bit bulkier compared to flagships with a similar screen size. Playing games and using the phone for multimedia apps was a pleasure thanks to its large screen size.

Huawei Y9 2019 comes with a HiSilicon Kirin 710 processor along with 4 GB RAM and 64 GB of storage. Storage is expandable via a microSD card slot.

Day to day performance was nothing out of the ordinary, apps opened up fast with no stuttering or lag when switching between them. Multitasking was also a breeze, with none of the apps reloading. Heavier apps did reload, but only when I had a lot of other apps open in the background as well.

There’s been a trend we’ve seen in Huawei phones, with dual front and back cameras (4 total). We see this trend in the Y9 2019 as well.

The camera app is similar to other Huawei phones, with shooting modes on the right side of the viewfinder with AI mode, HDR and other toggles on the left.

The AI mode oversaturates the colors and doesn’t really improve image quality. HDR didn’t improve the dynamic range or recover shadows from the images either. The camera quality was good but not great with some noise creeping in for the daylight shots. Low light shots weren’t exactly good, with a lot of noise and next to no detail.

The front cameras offered similar levels of quality but the portrait mode was a hit or miss, especially in low light.

Here are the camera samples we used for our review.

Arguably the best thing about the Y9 2019 was its battery life. It has a large 4,000 mAh battery unit, but it lacks fast charging.

Huawei phones are generally good in terms of battery life thanks to their software optimizations. Y9 2019 was especially good in our case.

In our use, we played games on the phone, used it for social media and watching videos on YouTube. Mobile data was on all day and the brightness remained between 50-100%. With all that the phone gave us a screen on time of 9 hours (!) with 4% remaining.

Overall the phone is a complete package with a nice looking design, decent performance, good cameras and an all-day battery. The battery life, in particular, was pretty good, with the phone’s large screen not hindering it in any way. Speaking of the large display, the phone is well suited for multimedia consumption and gaming.