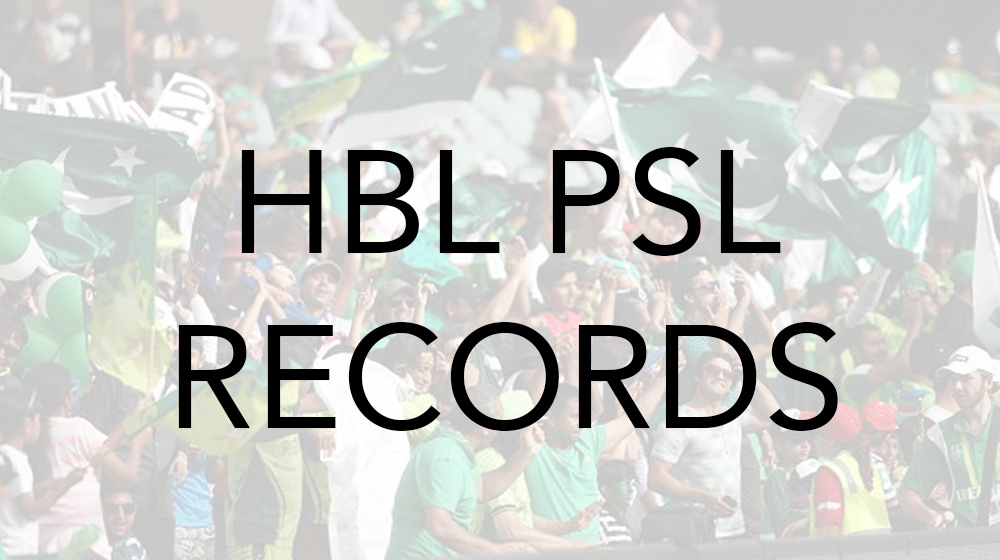 The Pakistan Super League (PSL) 2019 is all set to return from the 14th of February and the PSL lovers cannot contain their excitement.

Check out the PSL 2019 Schedule from here!

Before the fourth edition takes place, here is a complete list of records held by teams, players and franchises:

In PSL’s brief history, the most successful team is Islamabad United. The team in orange has won two out of three PSL editions; once in 2016 and another in 2018.

Behind Islamabad is Javed Afridi’s Peshawar Zalmi, who is the second most successful team. The team in yellow also has 19 victories but has played two more games.

In third place is Quetta Gladiator with a win percentage of 56.66, a total of 17 victories from 31 matches.

The epic run-chase by Quetta Gladiators of 203 for 8 against Lahore Qalandars in the first edition of PSL still remains as the highest run-chase thus far. Qalandars batted first and put 201 runs on the board but Gladiators registered the victory off the last ball of their innings.

Will we see a better run-chase in PSL 2019? Only time will tell.

The lowest total also has contributions from Lahore Qalandars, who have failed to live up to the expectations. While facing Peshawar Zalmi in Dubai in 2017, Lahore was bowled out for a total of 59 runs.

During the highest successful run-chase, Quetta Gladiators also set the record for highest runs scored in the powerplay, which is 77, against Lahore Qalandars in 2016.

The next highest score at the six-over mark is 75 by Qalandars against Gladiators in Sharjah in 2017 and by United against Karachi Kings in Dubai in 2018.

Perhaps an unlikely candidate, Kamran Akmal leads the overall PSL’s most runs scored. With an average of 29.66 and a strike-rate of 133.28, Kamran has scored 929 runs.

Furthermore, Zalmi’s Akmal is also the only batsman in HBL PSL which has registered two centuries in the history.

Talking about foreign talent, Australia and Quetta’s Shane Watson is the most prolific foreign batsman. He has managed to score 684 runs at an average of 29.73. The hard-hitter played the first two seasons with Islamabad United but has been with Gladiators since then.

There haven’t been many PSL centuries, only three actually. All three of these centuries have been scored by Pakistan batsmen; Kamran Akmal (2) and Sharjeel Khan (1).

Sharjeel’s century (117 off 62 balls) was against Zalmi in Dubai in the inaugural edition and remains the highest score in the tournament.

The opening stand between Shane Watson and Sharjeel Khan for Islamabad United against Lahore Qalandars in the first season remain the highest partnership with 153 runs.

The next best is by Zalmi’s pair of Mohammad Hafeez and Dawid Malan against Gladiators, also in Sharjah in 2017.

The most successful pair, however, has been Hafeez and Tamim Iqbal, who have together posted 431 runs in nine innings for Peshawar Zalmi.

The Most Destructive Batsman

The batsman with the highest strike-rate among those who have scored, at least, 200 runs in the tournament is United’s Luke Ronchi. He has piled 435 runs off 239 balls at a scoring-rate of 182.00.

Ronchi only played in the 2018 tournament and left a huge mark after clubbing 51 fours and 24 sixes.

However, the batsman who has hit most sixes in the tournament history is Kamran Akmal (49), followed by Watson (43).

The HBL PSL is known for big hitting as fours and sixes have galore in the three events to date.

Before the first ball has been bowled in the tournament, the tournament has already produced 1892 fours and 920 sixes from the bats of some of the finest players in the world.

Kamran Akmal has hit the most fours and sixes. He has struck 85 fours and 49 sixes, a tournament record on both counts.

The fastest 50 in the HBL PSL was scored off just 17 balls and came from the bat of Zalmi’s opener Kamran Akmal in the eliminator against Kings in Lahore in 2018. Akmal finished with 77 off 27 balls as Zalmi qualified for the final.

The only other batsman to score 50 in less than 20 balls is United’s Luke Ronchi. He took 19 balls to reach half-century against Kings in the Qualifier in Dubai in 2018.

Most Innings without a Duck

Wahab Riaz, the fierce Pakistani pacer, is the most prolific bowler of the HBL PSL. Thus far, he has taken 48 wickets at an average of 16.50 whereas his economy is 6.75. The left-arm pacer has played all three editions with Peshawar and was one of the main reasons behind their title win in 2017.

In second place is Islamabad United’s Mohammad Sami, who has taken 37 wickets at an economy rate of 6.55.

With 22 dismissals, Shane Watson is the most threatening overseas bowler.

There have been five five-wicket hauls in the HBL PSL with the first one registered by Kings’ Ravi Bopara. He finished with six for 16 runs against Qalandars in Sharjah in 2016. While four more bowlers have taken a five-for in the tournament, Bopara’s figures have not been bettered.

Shahid Afridi (Zalmi) and Mohammad Sami (United) were two other bowlers who claimed five wickets in 2016. No bowler managed a five-for in the 2017 edition whereas two, Umar Gul (Multan Sultans) and Shaheen Shah Afridi (Qalandars), pouched five-wicket hauls in 2018.

The fan-favorite, Boom Boom Afridi, has bowled five maiden overs in the PSL. He represented Peshwar Zalmi in the first two editions and then moved to Karachi Kings for the third edition.

Lastly, in third place, is another Pakistani, Mohammad Irfan, who has managed three maidens while representing Islamabad United and Multan Sultans.

Most Dismissals and Catches

Not only is Kamran Akmal the most successful batsman in PSL, but he is also the best wicket-keeper. He has managed the most number of dismissals behind the stumps – a total of 30 (23 catches and 7 stumpings).

As an outfielder, his younger brother, Umar Akmal has been the most successful fielder – taking a total of 15 catches.

Most Player of the Match Awards

Despite featuring in only one edition of the HBL PSL, Luke Ronchi has picked up the most number of man-of-the-match awards. In total and out of 11, he has been chosen as man-of-the-match 5 times.

Three players, on the other hand, have won the player of the match award 3 times; Zalmi’s Kamran Akmal, Gladiators’ Mohammad Nawaz, and United’s Mohammad Sami.