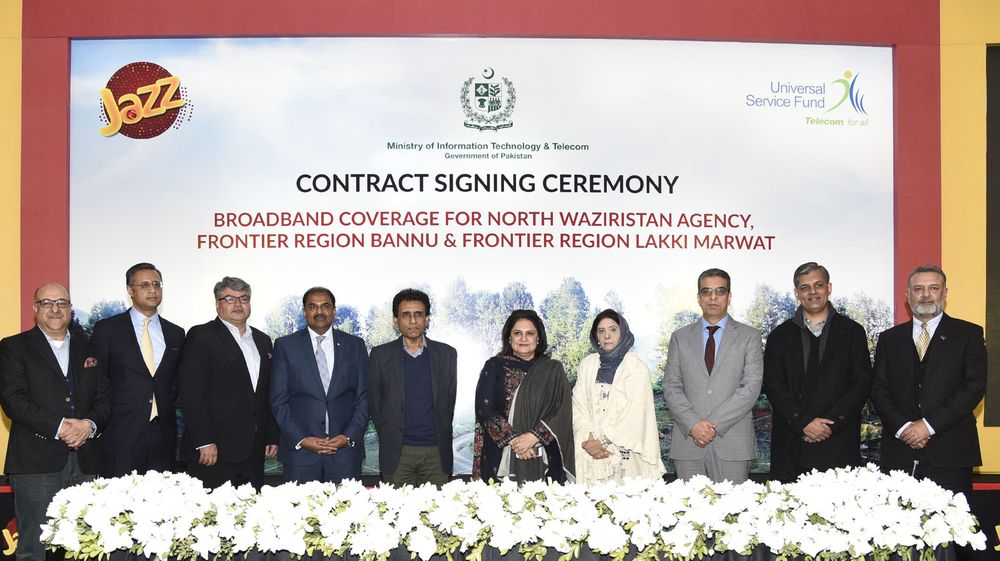 The total cost of the project is Rs, 258 million where government subsidy will be around Rs 192 million, a USF official informed ProPakistani.

Chief Guest of the ceremony, Federal Minister for Information Technology and Telecommunication Dr. Khalid Maqbool Siddiqui, while addressing the audience, stated that with constant dedication and devotion, Ministry of IT and Telecom had achieved yet another significant connectivity milestone. He also added that with such projects, Ministry for IT through USF will continue to work towards achieving the mission of broadband penetration across the country to facilitate the people in rural regions.

He said that in addition to Broadband Infrastructure, he expected USF to launch new e-services and m-services to facilitate digital lifestyle adoption for the people of Pakistan.

The USF-Jazz partnership will also open-up new progressive opportunities for local communities such as e-commerce. Digital and e-services are a rapidly evolving field and can provide better health, education, agriculture and business opportunities to the people in these areas. In order to execute this project, 28 towers will be installed by Jazz in about a year.

Speaking at the ceremony, Rizwan Mir, CEO-USF said that with the signing of North Waziristan contract, Universal Service Fund’s aim is to provide voice and data services to remote and underserved areas of Pakistan, where it is most critical for development. He added that this network would be completed in 24 months providing 3G/4G and Voice Services to a population of 0.57 million in 401 unserved Mauzas.

He further said that with the improvement of law and order situation in FATA areas, provision of advanced ICT infrastructure is key to the development efforts in the region. Mir said that they enjoy great support from Ministry of IT and Telecom as well as the ICT industry in our common mission to continuously work towards expanding broadband to all Pakistanis. He mentioned that USF was planning to launch several new broadband projects in the next few months, including one in South Waziristan.

Through this collaboration, Jazz and USF have successfully bridged the digital divide in the country’s remotest region. This is why the project has special significance for us and in due time residents of 401 administrative mauzas will have access to the mobile broadband connectivity. We are looking forward to assisting these people in unlocking their potential in an increasingly interconnected world.