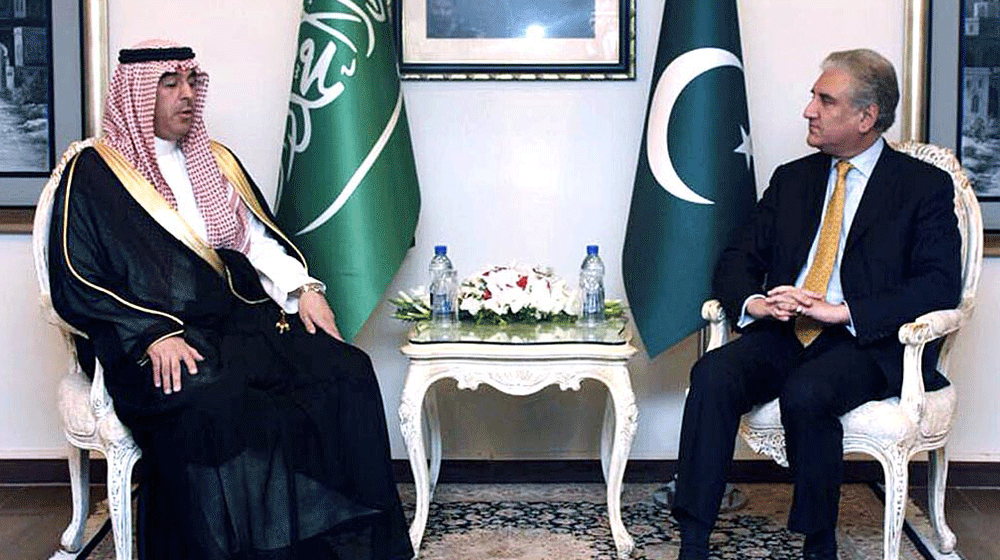 “With the visit of Prince Muhammad bin Salman, Pakistan and Saudi Arabia are going to witness an unprecedented level of closeness based on solid economic integration,” he said at a press briefing regarding the upcoming two-day visit of Saudi crown prince to Islamabad from February 16 to 17.

The MoUs will be related to diverse sectors including investment, finance, power, renewable energy, internal security, media, culture, and sports.

Minister for Information and Broadcasting Chaudhry Fawad Hussain, Advisor to Prime Minister on Commerce, Textile, Industries and Production and Investment Abdul Razak Dawood and Board of Investment (BoI) Chairman Haroon Sharif joined the foreign minister for a comprehensive briefing on the visit of the Saudi dignitary, with a particular focus on its positive impact on the economy.

Qureshi said that a high-level Saudi delegation including key ministers and over 20 businessmen from leading companies would hold meetings with their counterparts in Pakistan and discuss the potential of a bigger investment between the two countries.

He said a Pak-Saudi Coordination Council would be set up following the visit where Prime Minister Imran Khan would personally monitor the implementation of the MoUs.

He mentioned that Saudi Arabia had recently transferred $3 billion to Pakistan to aid the balance of payments and also promised deferred oil payments.

Information Minister Chaudhry Fawad Hussain, calling Saudi Arabia a strong and trusted friend of Pakistan, said that the Kingdom always had helped us in trying times.

He said this was the first time after former prime minister Zulfikar Ali Bhutto that Pakistan had attained immense success on a diplomatic front.

On the Saudi interest to explore Pakistan’s oil refinery sector, he said the feasibility study by their experts on petrochemical complex and hydrocracking could take up to 12 to 15 months.

He said Pakistan is in a dire need for refined oil products, for which Saudi Arabia had shown willingness to meet the needs of local oil market with an investment of $2 billion for two years in addition to investment in Pakistan’s mining sector.

Following the visit of Saudi crown prince, the BoI would remain in constant touch with their Saudi counterparts on a technical level, he said.

He mentioned that Saudi Arabia was planning to develop two new cities in the Kingdom and the situation would encourage Pakistani workforce to be accommodated in diverse jobs.

Responding to a question, if Pakistan would pay the price in return of Saudi investment such as becoming a part of a military coalition against Yemen, Foreign Minister Qureshi strongly dismissed the notion, saying, “I say it loud and clear that there is no condition attached with Saudi investment.”

He said Commander of the Islamic Coalition General Raheel Sharif, during his meeting with him the other day, made it clear that the force was not specific to any country or a particular sect and the suspicion in this regard was not well-counted.

When asked if Saudi investment could be termed as part of the China Pakistan Economic Corridor project, he said even though it was bilateral, Pakistan and China had agreed upon setting up three Special Economic Zones that could be joined by other countries including Saudi Arabia and the United Arab Emirates.

Whether the issue of Kashmir would be taken up with Saudi crown prince in view of his visit to India next week, Qureshi said Saudi Arabia was a member of the Contact Group on Kashmir and through its representative had made a clear statement supporting the stance of Pakistan.