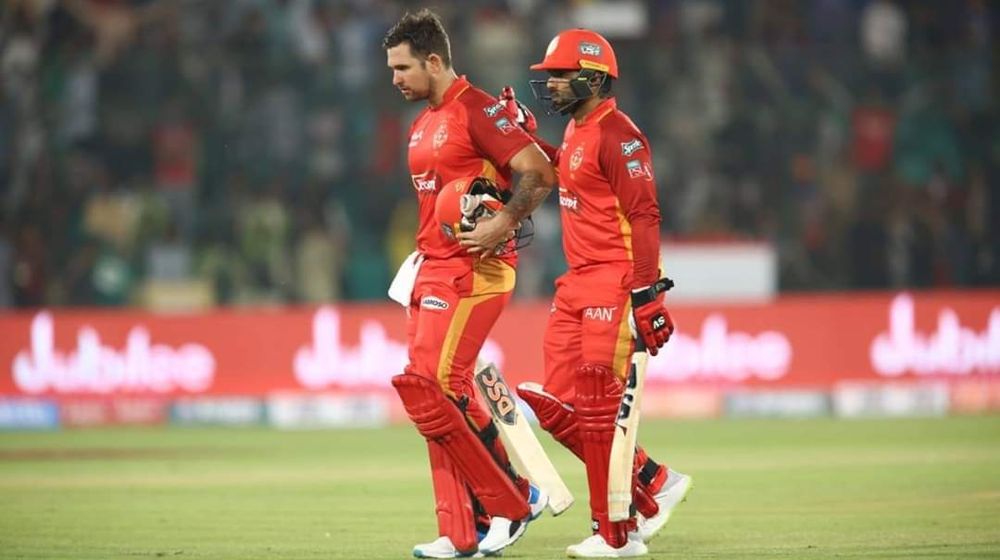 It is the first eliminator of the PSL 2019 and Islamabad United will take on Karachi Kings to secure their place in the second eliminator against Peshawar Zalmi.

Let’s have a look at the two teams’ performances this year.

Run to the Playoffs

Out of the 10 matches, both teams won 5 each with Islamabad United edging ahead on Net Run Rate (NRR) with 0.127 while Karachi Kings finished with -0.673.

Islamabad United has faced trouble defending targets as evident from the losses. They have lost 4 matches while defending.

Karachi Kings lost both matches against Islamabad United this season which will be a bit of a worry for Imad Wasim led side heading into the all-important Eliminator. They have also failed to win against Peshawar Zalmi this year.

Islamabad United’s biggest win in terms of the runs was by 49 runs against Lahore Qalandars. They won by 7 wickets against Karachi Kings at Sharjah.

When it comes to defending totals, Karachi Kings hasn’t done very well. The biggest margin of victory is by 7 runs. The team defeated Quetta Gladiators by 6 wickets at Sharjah while chasing 187.

Islamabad registered the highest ever total in PSL history with 238/3 against Lahore Qalandars.

The good thing for Karachi Kings is that they have crossed the 180 runs mark three times with the highest total of 190/5 against Quetta Gladiators.

Four players from Islamabad have scored half-centuries this season with 1 hundred by Cameron Delport, who scored 117*. The breakdown of the 50s is listed below:

Colin Ingram scored the first century of PSL 2019. He ended up with 127*, which is the highest ever individual score in PSL history. The list of the half-centuries is as follows:

Note: Centuries are not included in the list of half-centuries.

Cameron Delport has the two highest individual scores for Islamabad United in PSL 2019.

Faheem Ashraf has been brilliant for Islamabad United this season. He has taken 19 wickets in 10 innings with a PSL record of 6/19 against Lahore Qalandars

Teenager Umer Khan has been the pick of the bowlers for Karachi Kings with 13 wickets. Mohammad Amir and Usman Shinwari have taken 12 each.

Who do you think will play Peshawar Zalmi in the second Eliminator? Let us know your pick in the comments section.