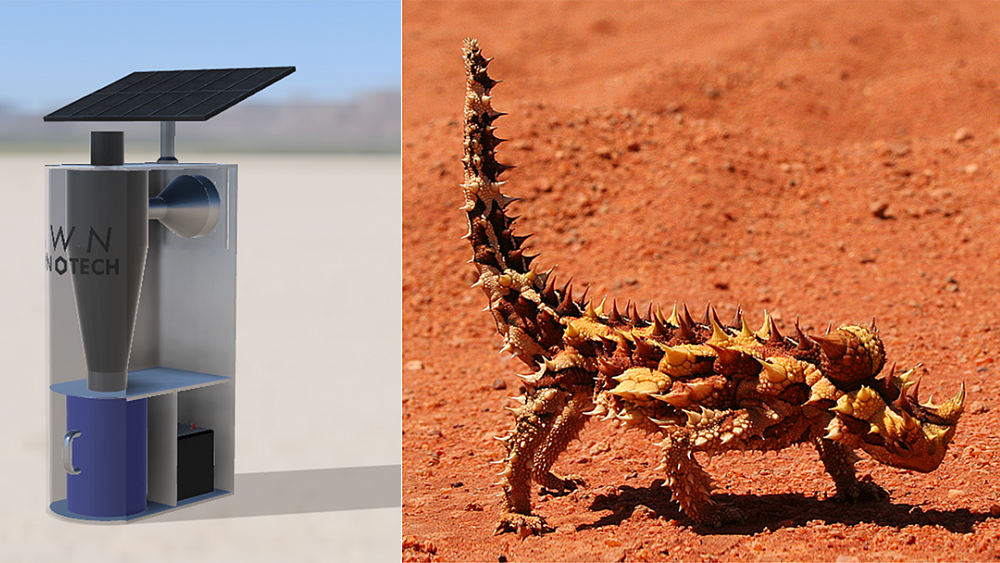 It could be a great solution for countries going through a water crisis.

There is nothing more important than clean water, yet we are at the brink of a global water crisis. Billions of people around the world are being affected by the lack of fresh water. Many attempts at extracting water from different sources have been made but an energy effective solution hasn’t been found, until now.

The Canadian innovation AWG from the company AWN Nanotech might be our answer. Richard Boudreault, the company’s founder is a biochemistry professor and also a fellow at the Canadian geographical society.

The device is inspired by the biological adaptation found in thorny devil lizards, mimicking the absorption abilities of the thorns on the lizard’s skin. The thorns absorb water from their surroundings and release it in the lizard’s mouth.

What Does it Do?

The device is known as an Atmospheric water generator (AWG). It converts the humidity in the atmosphere to potable drinking water and hardly uses any energy.

Richard’s inspiration for the AWG came from the Mediterranean nation of Malta which is surrounded by water but faces a severe water crisis since all the water is salty and extracting drinkable water from it is very costly.

The device employs a water extraction mechanism developed in 2016 by the Simon Fraser University, inspired by lizards and cacti. Both the species have thorns (and small hair-like strands in case of cacti) that absorb water from the atmosphere for survival.

The device uses a high-tech cloth with strands as little as 20 micrometers each. Each square meter of the fiber cloth can extract 12 liters of water in an hour. The amount of water extracted also depends on the humidity in the atmosphere.

We are mimicking — or biomimicking — techniques from different beings, Cacti and lizards and other types of animals that have adapted to living in a very dry environment. We have a small fan that is propelled by solar energy just to keep the amount of air flowing to a maximum on the membrane.

This device only uses 0.01 kWh of solar energy which is 85 percent less than what a basic light bulb uses. As compared to other water extracting technologies, this device uses 20 to 70 percent less energy. The minimum amount of energy required to run the device is what really addresses the problem. It is fully dependent on solar energy which is why its applications are extensive.