According to the Pakistan Automotive Manufacturer’s Association (PAMA) report, over 17,000 passenger cars were sold during April 2019 and the total sales for the first ten months of the ongoing fiscal year stand at 177,400.

The highest number of sales in the various categories was seen by cars with an engine displacement of 1300CC and above, this category saw 8,019 units sold collectively. 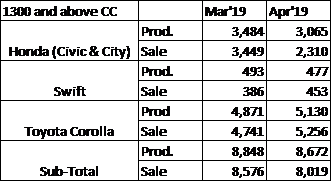 The Toyota Corolla saw the highest number of units sold in this category with 5,256 units sold last month as compared to 4,741 units in March.

Honda came in 2nd position with 2,310 units sold – for both the Civic and City.