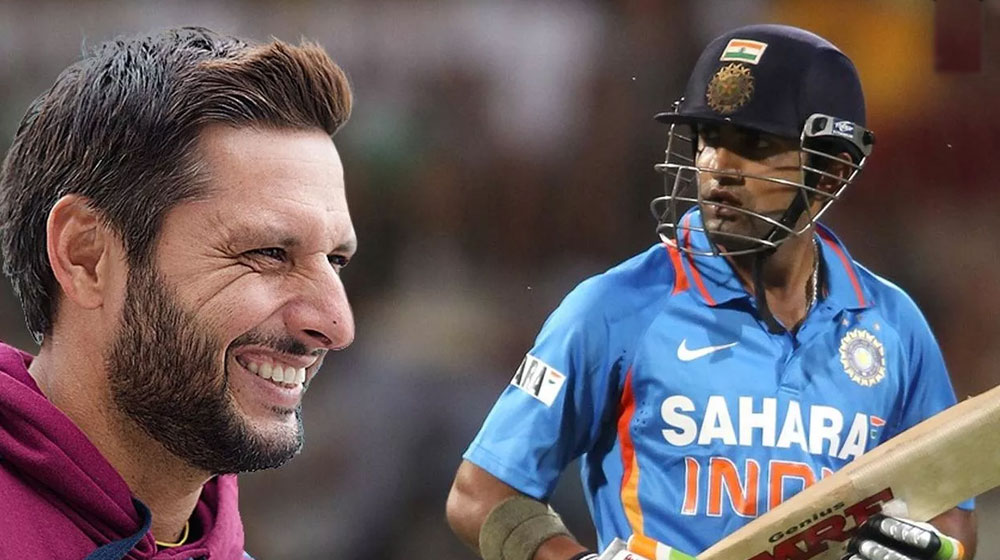 Former Pakistan captain Shahid Afridi has taken another jab at cricketer-turned-politician, Gautam Gambhir for suggesting that India should boycott its World Cup match against Pakistan.

While addressing a press conference on Saturday, Afridi lashed out at the former Indian opener who got elected as a Parliamentarian in recently concluded elections.

Afridi termed Gambhir’s remarks as ‘foolish’ and criticized the people of India for electing a candidate with ‘no sense.’

Gambhir, after winning his seat from East Delhi on BJP’s ticket, said that India should not play against Pakistan in any circumstances.

“We can’t play with the sentiments of our country. Two points are not important than the lives of our soldiers, but for this, the entire country needs to be on the same page. We should have the courage to lose points even it’s the first match or the finals. Even if we boycott playing the World Cup final against Pakistan, the country must stand together,” Gambhir said on a local TV channel.

To a question related to Gambhir’s statement, Afridi questioned whether a wise man would give such a senseless statement and that educated people do not talk in this manner.

Do you think it is sensible what Gautam Gambhir has said? Does this sound like something a sensible person would say? Do educated people talk like this?

Shahid Afridi responds to Gautam Gambhir's suggestion that India should forfeit any World Cup matches versus Pakistan "Does this look like something which a sensible person would say? Do educated people talk like this?" #CWC19 pic.twitter.com/wYgtoOMI5k

Gambhir is yet to comment on Afridi’s latest remarks.

The verbal spat between the two started when Boom Boom, in his autobiography, termed Gambhir ‘a person with no personality and a lot of attitude.’ He also called him a cross between Don Bradman and James Bond.

Gambhir hit back and offered to take Afridi to a psychiatrist.

“…you are a hilarious man!!! Anyway, we are still granting visas to Pakistanis for medical tourism. I will personally take you to a psychiatrist,” Gambhir tweeted.

And, Afridi was quick to respond.

Shahid Afridi "The Indian Government doesn't normally give visas to our people, but I will welcome everyone from India to Pakistan. Our people and our Government have always welcomed Indians and as for Gautam, I will get a visa arranged so that his treatment can be done here"

The war of words isn’t coming to a halt, however, Afridi knows how to handle someone like Gambhir as we saw in the Asia Cup clash where it all started.