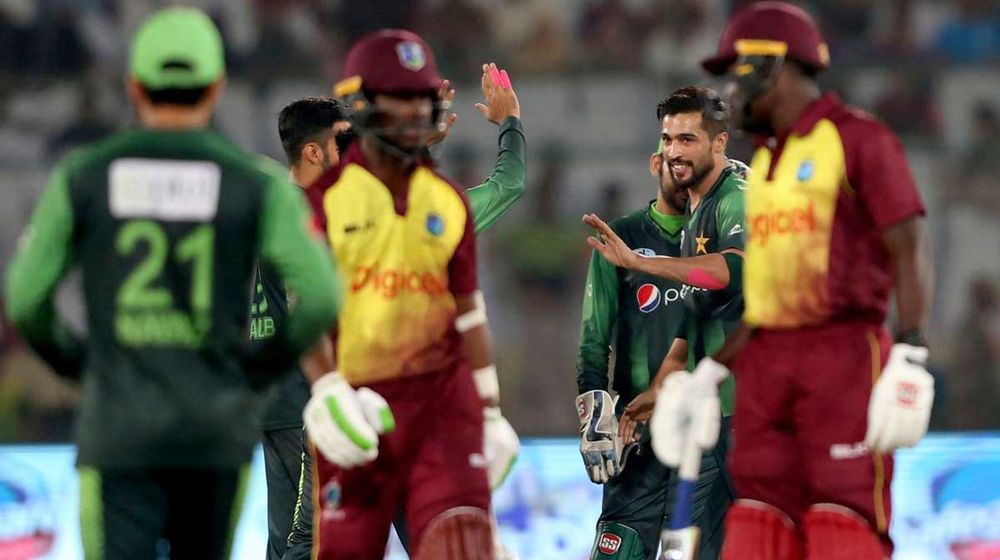 Pakistan is set to kick off the official World Cup campaign against the West Indies today. It will be the 4th time Pakistan will start their mega event with a match against the Windies.

When it comes to Pakistan vs West Indies head-to-head clashes in the World Cup, the Men in Maroon have a clear edge with a 7-3 record.

Without further ado, let’s have a look at Pakistan’s performance against the two-times champions in the World Cups:

Pakistan faced the mighty Windies in their second match of the inaugural edition of the World Cup. Pakistan had lost their opening game against Australia and no one gave Pakistan a chance against the team led by Clive Lloyd.

However, it was one of the closest matches in the tournament as West Indies chased down the target of 267 in the final over (60th over) with just one wicket in hand. Sarfaraz Nawaz’s heroic bowling display of 4/44 in 12 overs went in vain as Lloyd XI got over the line with a narrow margin. He was, however, declared the man of the match.

After a brilliant group stage, Pakistan faced the challenge of the West Indies in the semi-final. It was a clash dominated by batting as Windies openers Gordon Greenidge and Desmond Haynes put up a stand of 132 which ultimately led to a solid total of 293/6 in 60 overs.

Pakistani batters did well in the chase, thanks to the second wicket partnership of 166 between Majid Khan and Zaheer Abbas. However, Pakistan lost 9 wickets for just 74 runs to get bowled out for 250.

In the 70s and early 80s, the only team that stood up to the challenge against the world’s best side was Pakistan as they consistently challenged the opposition no matter it was the World Cups or home or away series.

Pakistan met the Windies in yet another semi-final with the same result. West Indies thumped Pakistan to storm into their 3rd consecutive World Cup final. They chased down Pakistan’s target of 185 with ease.

It was Pakistan’s time to return the favor of a nail-biting one-wicket win at Gaddafi Stadium, Lahore. It was Abdul Qadir’s thrilling six in the last wicket partnership that sealed the deal for the hosts.

First, a brilliant display of reverse-swing from Imran Khan and Wasim Akram followed by a nerve-breaking chase with multiple collapses made the clash one to remember for cricket fans.

Shortly after their first World Cup loss against Pakistan, the Windies were back to winning ways as they downed Pakistan in the second group stage match by 28 runs, avenging their Lahore defeat in Karachi.

Chasing 259, Pakistan managed 230 as they lost their first match of the group stages out of 6 games.

West Indies challenged Pakistan to bat first and despite an unbeaten century by Ramiz Raja and fluent 57 by Javed Miandad, Pakistan posted a total of 220.

The opening batsmen, Desmond Haynes, and Brian Lara dismantled the Pakistani bowling attack as they failed to remove any of the batsmen and West Indies easily won by 10 wickets with 19 balls to spare.

Pakistan and West Indies faced each other on a flat Bristol track in the league stage. Pakistan’s top order turned in a dismal performance as they were reeling at 42 for 4. Thanks to late resistance, Pakistan posted a total of 229 for 8.

In response, West Indies kept on losing regular wickets throughout the innings and lost the game by 27 runs. All-rounder Azhar Mahmood was awarded man of the match for his all-round efforts – three wickets with the ball, and a vital 37 with the bat – that helped Pakistan claim their opening victory at the 1999 World Cup.

Playing a World Cup at home for the first time, West Indies put 241 for 9 on the board thanks to Marlon Samuels’ 63 and a brisk 32 by Dwayne Smith.

Pakistan’s chase never took off as the top order completely collapsed. Inzamam-ul-Haq and  Muhammad Yousaf tried to lead a rescue, but they also failed as Pakistan fell short by 54 runs.

Shahid Afridi, Mohammad Hafeez, and Saeed Ajmal shared 8 wickets between them to spark a collapse. West  Indies only managed 112.

Pakistani openers, Mohammad Hafeez and Kamran Akmal chased down the total in just over 20 overs without any hiccup.

Pakistan won the toss and elected to bowl first at Hagley Oval in Christchurch. West Indies, despite losing Chris Gayle and Dwayne Smith early, posted a challenging total of 311.

Jerome Taylor dismantled Pakistan’s top order as they collapsed to a jaw-dropping 1-4. Sohaib Maqsood and Umar Akmal tried to rescue but it was all in vain as Andre Russell sealed the deal by taking 3 wickets at the end.