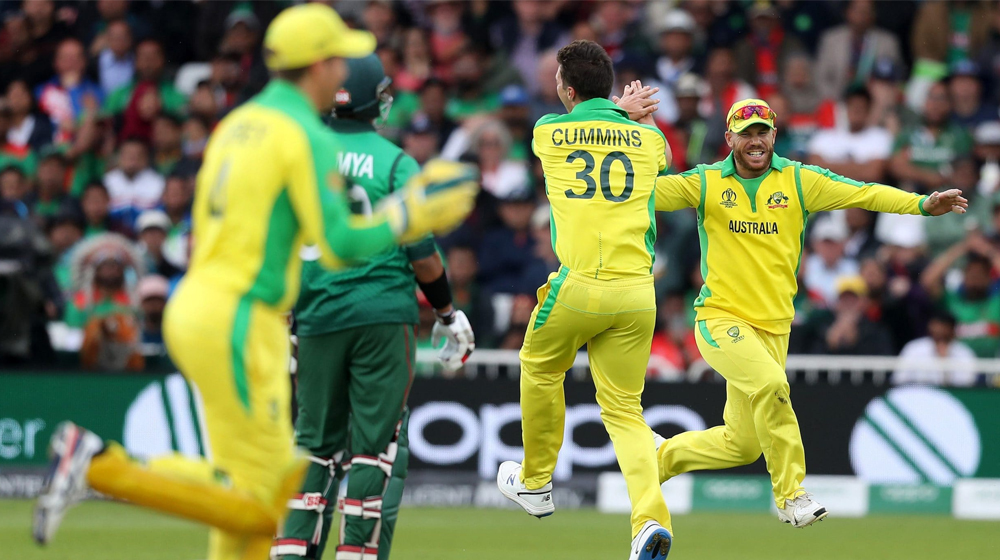 With yet another century, David Warner not only became the top-scorer in the on-going World Cup 2019 but also helped the reigning champions reach the top of the table.

Australia won the match and elected to bat first. Warner was given a lifeline at 10 when he was dropped by the Bangladesh captain at backward point and he made the opposition pay.

Warner made 166 runs from 147 deliveries, smashing 14 fours and 5 sixes throughout his innings. This is his 2nd century of the tournament, with the first one coming against Pakistan.

Aaron Finch, Usman Khawaja both reached their half-centuries as well and helped Australia post 381 runs on the board at a loss of 5 wickets.

For Bangladesh, Soumya Sarkar was the pick of the bowlers as he picked up three wickets from 8 overs. Despite the wickets of Warner, Finch and Khawaja, Soumya proved to be an expensive bowler as he conceded 58 runs.

Throughout the tournament, Bangladesh have proven to be a strong opposition. Chasing 381 runs is not an easy task but Bangladesh started off with flying colors thanks to Tamim Iqbal.

The run-out of Soumya Sarkar in the 4th over did not stop Tamim Iqbal as he reached his half-century. Shakib-ul-Hasan and Tamim both built a good partnership after Soumya’s dismissal but Stoinis and Starc both dismissed the set batsmen respectively and got the Aussies back in the game.

Mushfiqur Rahim, one of Bangladesh’s most experienced batsmen, showcased his class as he got to his century and remained the not-out batsman at the end of the innings. However, his century was in vain as the rest of the batsmen could not support him well enough.

Liton Das was dismissed for 20 runs by Adam Zampa whereas Mahmdullah’s great effort of 69 was ended by Coulter-Nile. The Bangladeshi tail failed to hold their nerve against a good Aussie pace attack.

Bangladesh were all out of 333/5 and Mushfiqur Rahim remained not-out at 102 runs.

Man of the Match

David Warner was awarded the man of the match for his remarkable innings of 166 runs.