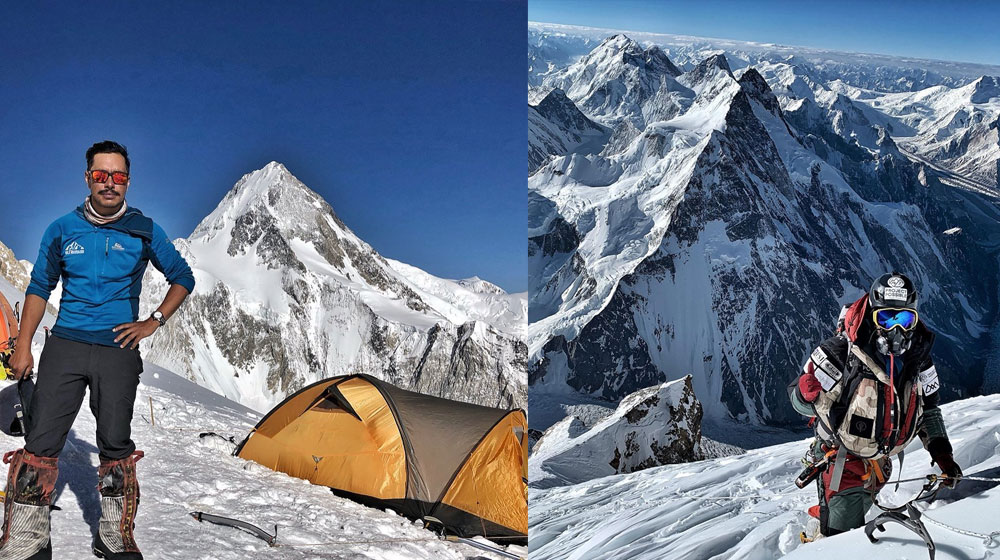 Those who have a knack for climbing must have heard of Nirmal Purja – the famous Nepalese mountaineer who has climbed almost all the highest mountain peaks on earth.

Nirmal, aka Nims, is a former British soldier who served in the defense regiments as a Gurkha – Nepalese nationals recruited for the British military.

He has multiple climbing records to his name. He was the first Gurkha to have conquered Mount Everest while serving in the British Military.

Nims also holds the records of fastest ascent and descent of multiple double and triple header mountains of 8000m category.

▪THE MAN IN THE ARENA▪ . Summited Gasherbrum 1 8080m and Gasherbrum 2 8035m within 3 days after immediately covering 8 days worth of trek from Nanga Parbat in just 3 days. @bremontwatches ⏱ . After severe weather on Nanga Parbat and trail blazing the route, myself and the rest of the Bremont Project Possible team were exhausted, we still trekked with all of our kit to Gasherbrum over 40km. . . . The team had to overcome some extreme and challenging experiences at G1. More detail to follow. . We had little to no respite between G1 and G2 but I’m ecstatic to say that’s … . 9x8000m mountains ✅ . "It is not the critic who counts; not the man who points out how the strong man stumbles, or where the doer of deeds could have done them better. The credit belongs to the man who is actually in the arena, whose face is marred by dust and sweat and blood; who strives valiantly; who errs, who comes short again and again, because there is no effort without error and shortcoming; but who does actually strive to do the deeds; who knows great enthusiasms, the great devotions; who spends himself in a worthy cause; who at the best knows in the end the triumph of high achievement, and who at the worst, if he fails, at least fails while daring greatly, so that his place shall never be with those cold and timid souls who neither know victory nor defeat." . @thrudark 🌑 . #TestedBeyondEndurance #Bremont #BremontProjectPossible #nimsdai #believer #uksf #sbs #projectpossible #specialforces #14peaks7months #S300 #nolimits #humanendeavour #limitless #selfbelief #determination #thrudark #positivemindset #nimsdai #alwaysalittlehigher

In February this year, Nirmal set out to summit all 14 summits of ‘higher than 8000m’ category in just seven months. The previous record is over seven years. He called this mission “Project Possible 14/7.”

Since the start of his journey in March, Nims has conquered 11 of them.

After successfully summiting G2 I’ve arrived at K2 basecamp to find most teams packing up and abandoning their expeditions. Clearly this isn’t an option for the "Bremont Project Possible 14/7". . It’s now confirmed that I will be heading up the summit fixing team of 5 Sherpas ; 2 from the seven summit treks and 3 including myself from the Project Possible team. We will be heading up for the summit push on the 24th. . I know no one is bigger than nature, but with hope, belief and determination we will be pushing for summit on the 24th. The remaining climbers will follow 24 hrs later due to safety reasons . I hope the mountain will allow us all a safe passage. . If I’m honest , I could have gone to Broad peak and then follow up K2 but there’s a lot of hope in my team hence I’m intentionally heading towards K2. 🙌🏽🙏 . . . . #nimsdai #believer #uksf #bremontprojectpossible #bremontwatches #S300 #14peaks7months #persistence #nolimits #humanendeavour #limitless #selfbelief #determination #positivemindset #beliveinyourself #thrudark #hamasteel #digi2al #everence #summitoxygen #inmarsat #elitehimalayanadventures #alwaysalittlehigher

The world-famous climber entered Pakistan in July and has so far mounted the topmost peaks including Nanga Parbat, Gasherbrum-I and Gasherbrum II.

In the second phase of the project, he aims to climb K2 – the world’s second-highest peak after Everest – and Broad Peak.

If he continues with his current pace, Nims might end up climbing all 14 highest peaks of the world in less than seven months, which will be a world record.