The federal government has empowered the Central Selection Board (CSB) to promote bureaucrats on their reputation and performance rather than seniority.

In the latest development, the CSB has increased its discretionary marks from 15 to 30 – allowing any bureaucrat on lowers ranks to supersede their seniors based on overall markings.

According to the new rule, okayed by the Prime Minister and notified on December 3, the promotion of civil servants will be based on three criteria:

As per the rule, inducted in the official gazette of the Civil Servants Promotion (BPS-18 to BPS-21) Rules 2019, CSB members will have more say in the promotion of a candidate with 30 discretionary marks. Professional courses taken by a bureaucrat will add 30 more to the tally, while the remaining 40 are reserved for the ACRs. 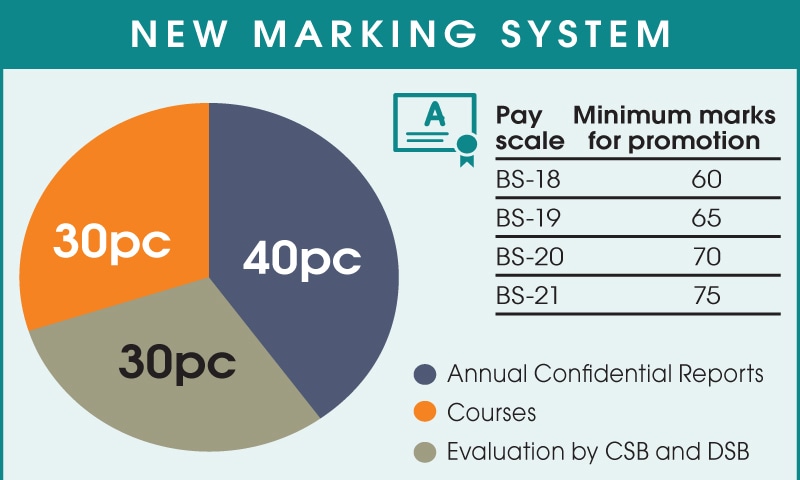 Previously, promotions for civil servants were much easier as it mostly depended on the number of courses taken by an individual, and annual reports with the selection board members having no say.

A bureaucrat could get promoted even after receiving zero ratings from CSB. However, under this rule, every civil servant will be required to secure at least 60 to 70 percent marks in CSB to get promoted.

Describing the effectiveness of the new rule, Prime Minister’s Adviser on Establishment Shahzad Arbab highlighted that increasing discretion power for CSB was very important to promote merit in the system.

Govt is Considering Eliminating CSS and Other “Superior Services”

As per my personal experience, the CSB generally makes an objective assessment as it examines each and every officer for promotion. You cannot gauge eligibility of the officers on annual reports as almost every officer gets an outstanding ACR.

He noted that the proposal was forwarded by the secretaries committee, which comprises all federal secretaries and is led by the cabinet secretary.

Arbab mentioned that the move is not politically motivated and aims to promote meritocracy.