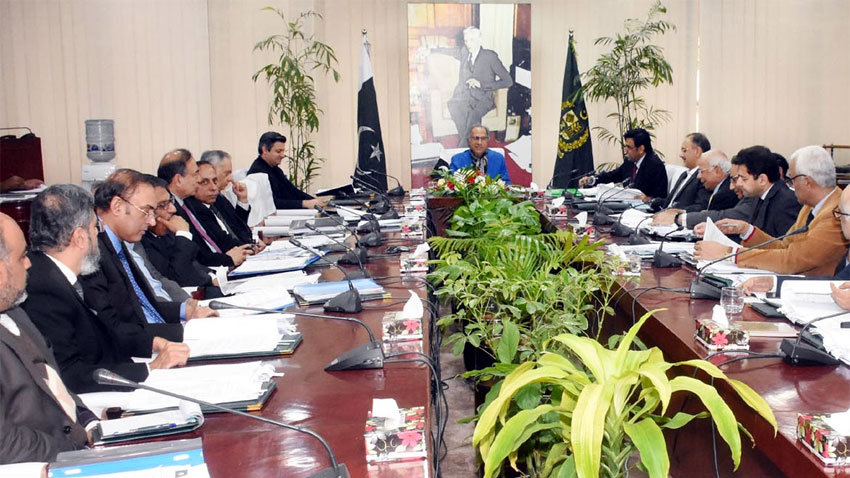 The Economic Coordination Committee (ECC) of the Cabinet has approved a technical supplementary grant of Rs 459.5 million for dealing with the desert locust threat.

The direction was issued in a meeting of the ECC held at the Cabinet Block with Adviser to Prime Minister on Finance & Revenue Dr. Abdul Hafeez Shaikh in the Chair.

The committee had directed the Ministry of National Food Security and Research to brief the ECC in its next meeting on the measures taken so far, including the areas treated so far with spray and pesticides to control the threat of desert locust in different parts of the country.

It was informed that nine districts of the country are affected by locusts and the Department of Plant Protection has been given the responsibility of dealing with the threat. So far 170,000 hectares have been cleared and the Ministry has been provided updates on daily basis.

According to the details, the ministry sought Rs. 203 million for purchase of pesticides and sprays and for other expenditures; however, the committee approved Rs. 459.5 million with the directive to adopt a transparent procedure for clearance of land from locusts without any distinction between land of the rich and the poor.

The ministry is said to have told the ECC that its target is to clear 3,000 hectares of land every day to protect crops.

The Economic Coordination Committee (ECC) of the Cabinet has also approved the “Enactment of Pakistan Single Window Bill, 2019” to be forwarded to the Cabinet. The enactment of the Bill will highly facilitate the businesses in Pakistan.x`

The ECC was apprised that 42 government agencies are involved in granting approvals for different businesses. Through this Single Window, all parties involved in trade and transport can lodge standardized information and documents with a single-entry point to fulfill all import, export and transit-related regulatory requirements.

The released statement read that the Customs Wing in FBR had developed NSW Road-map and Implementation Framework, in April 2018 with the help of international experts. The initiative is expected to improve Pakistan’s rating at ‘ease of doing business’ index. It is expected that the project will be completed in December 2021.

The ECC also allowed the continuation of funding facility by Gas Holding Private Limited (GHPL) for Inter-state Gas Systems (Private) Limited for another 2 years. There will be a provision in the agreement that as soon as the first project reaches closure, ISGS needs to be financially self-sustaining and it should put forward a business plan as to how it will return the loan it had taken.

The ECC approved the placement of the Annual Report of the National Economic Council (NEC) (as required by Article 156 of the Constitution), before the Cabinet after the Chair was briefed that the points raised regarding the report for its placement before the Cabinet, had duly been addressed.

The Ministry of Energy got the approval of a proposal for the extension and rehabilitation of gas networks in oil and gas producing districts of Khyber Pakhtunkhwa (Phase 1) and supply of gas to villages falling beyond the 5-KM radius of Mardan Khel-III District Hangu and supply of Gas to Hafizabad.

Accordingly, SNGPL was allowed to execute gas development schemes recommended by DWP and endorsed by the Board of Directors of SNGPL along with an appropriate share of the funding shared between SNGPL and Government of Khyber Pakhtunkhwa.

On the proposal sent by the Ministry of Interior, the ECC approved the allocation of Rs. 300 million through Technical Supplementary Grant (TSG) for raising of 1 Special Wing of Pakistan Rangers for (Protection of) Kartarpur Corridor on the recommendation of GHQ.