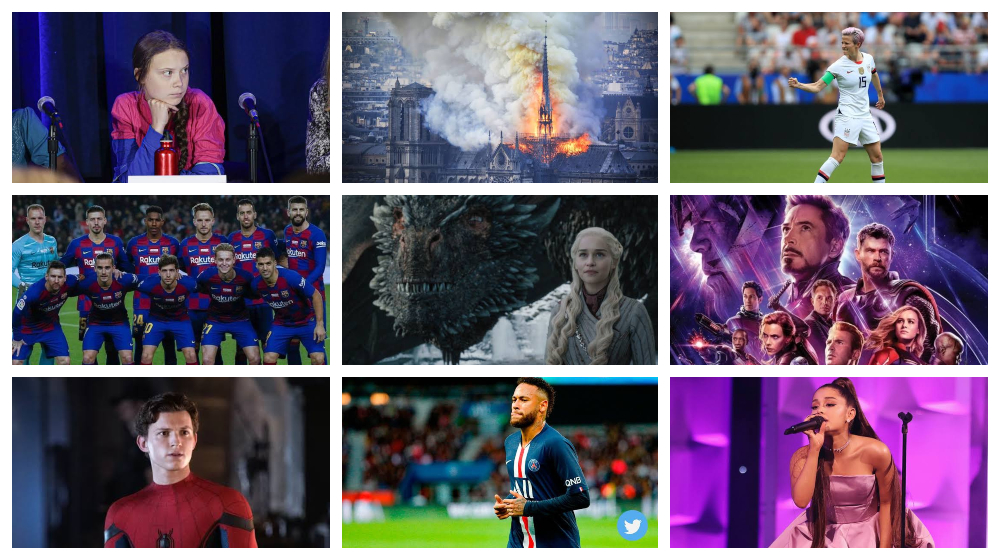 2019 has been an eventful year and it is finally coming to an end. It is that time of the year when you plan for your new year resolutions and look back at how things unfolded in the year past.

Plenty of things, both good and bad, have happened in 2019 and the next year is only a few days away. It will bring with it so many new adventures, and it will have its good and bad moments.

Coming back to 2019, it was a year to remember for many, while it wasn’t kind enough to others. Today, we take a look at what happened in the world through the lens of Twitter.

The microblogging platform has shared its end of the year list with hashtag #ThisHappened to reflect on the top trending events, teams, athletes, politicians, actors, movies, musicians and even smileys.

Let’s have a look at all these trending topics that made waves on Twitter in 2019:

Starting with major happenings across the globe, the Twitterati talked the most about the famous Notre Dame cathedral’s burning in Paris. Here are the top 10:

Despite tall claims, the Kashmir issue hasn’t managed to get into the top trends worldwide, which somewhat highlights the shortcomings of the Pakistan government to highlight the matter enough.

Sports are a widely discussed topic and this year was no different.

According to Twitter, the UEFA Champions League was the most talked-about sporting event of 2019.

As expected, the most loved sports teams were mostly from football leagues around the world, while athletes from tennis, football, and basketball got a lot of people talking.

When it comes to entertainment, people love to talk about the latest movies, TV shows, music albums, and actors. After seeing the list below, you will have a good list of movies, dramas, actors, and musicians to follow:

The heading has already explained what I am trying to do here, hasn’t it?

Politicians and feelings go hand in hand, so let’s have a look at which politicians ruled Twitter in 2019 and how people felt in the same year.

Note: These emojis don’t describe these politicians, otherwise the third one would have been different.

Note that the emojis have been ranked based on total tweet volume and politicians on the number of unique authors discussing them.

A little something for Imran Khan fans: He is among the top 10 most followed politicians worldwide, but, that doesn’t mean he was among the most talked-about world leaders in 2019.

To conclude this fairly long post, here’s a little something to cheer you all up. These tweets below are some of the most retweeted tweets worldwide in 2019:

Can everybody just Please look at this cat pic.twitter.com/GEPe1XzurJ