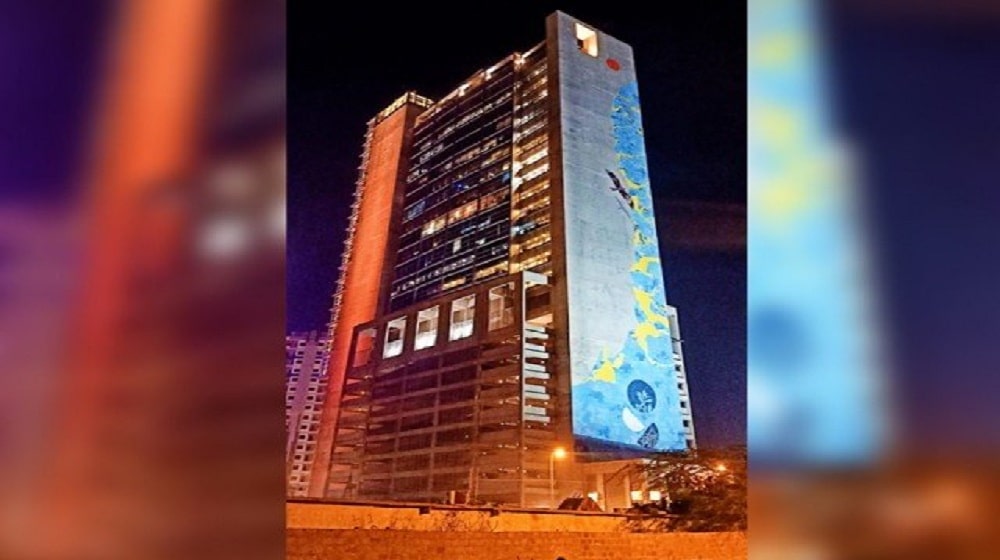 ‘Rising Blue’ the world’s tallest public art mural has been unveiled at the TPL Tower at Karachi.

Italian artist Giuseppe Percivati has made the 286-foot-tall mural under the International Public Art Festival (IPAF), an initiative of ‘I Am Karachi.’

Speaking at the unveiling ceremony, Italian Consul-General Anna Ruffino said that ‘Rising Blue’ not only exhibits a message of peace but it also reflects the deteriorating global climate.

Giuseppe Percivati is a talented artist who has worked in the US, Portugal, and Japan. Rising Blue is a gift from IPAF to the citizens of Karachi, said Anna Ruffino.

Giuseppe Percivati said that ‘Rising Blue’ was completed in just 9 days but it took him several months for preparation.

Describing ‘TPL Tower’ as the canvas for the mural, Percivati said:

I came to Karachi in July to find a location for ‘Rising Blue.’ As soon as I saw the tower, I said it is the perfect place.

Karachi is a beautiful city but has been neglected a bit. It is called the “City of Lights” and the people of Karachi are beautiful. The city can be as beautiful as Milan, Rome or London.

IPAF chairman, Jameel Yusuf, said that ‘Rising Blue’ symbolizes Karachi’s coastline and the fast depleting mangroves along with it. Diminishing mangroves have not only resulted in seawater intruding into the Indus delta but it also threatens marine life and birds.

‘Rising Blue’ is artistic and abstract in a way as it not only suggests the height but also the rising ocean levels referring to climate change. It depicts the rise of a nation, of a voice, of the awakening of the conscience of climate change. It is also symbolic of us as a nation: how we keep rising despite our setbacks