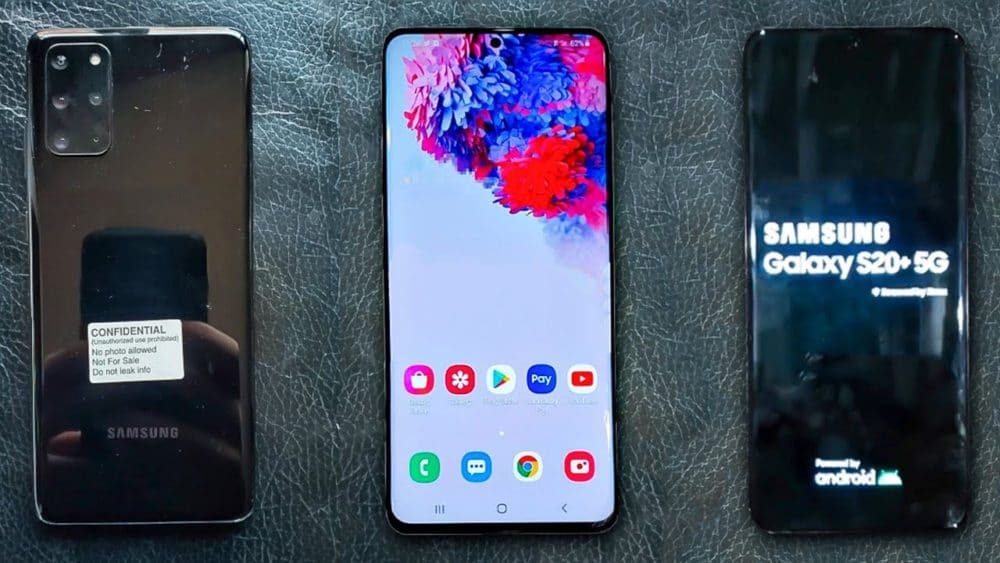 Samsung is all set to host its unpacked 2020 event today. The company is said to launch three variants of the Galaxy S20 series, and a clamshell foldable phone dubbed the Galaxy Z Flip. As we count the last hours until the event, let’s take a look at the rumor roundup of all the Samsung Smartphones due launch.

This standard version of the series is expected to come with an A71-like design. It has a similar rectangular camera aisle and a similar punch hole in the center of the display.

The smartphone is tipped to come with a 6.2-inch WQHD+ (1440 x 3200 pixels) Dynamic AMOLED display. Like all the phones in the series, it will also feature a 120 Hz refresh rate, although it may be available only in 1080p mode.

Internally, the Samsung Galaxy S20 will be powered by Snapdragon 865 chipset in some regions, while in others, it will come with the Exynos 990 at the helm. The SoC will be topped with 128 GB of onboard storage and 8 GB RAM (non-5G) or 12 GB RAM (5G). The smartphone will be launched in two variants, i.e. without 5G support and with 5G support.

On the software front, it is expected to come with One UI 2.0 skinned Android 10.

The vanilla S20, as per rumors and leaked renders, will come with a triple sensor rear camera with a 12MP main wide sensor, 64 MP telephoto lens, and 12 MP ultra-wide sensor. The camera will be backed by 3x optical zoom, up to 30x digital zoom and up to 8k 30 FPS video recording.

On the front, it will be equipped with a 10 MP single sensor for selfies.

The whole package will be fueled by a 4000 mAh battery backed by 25W of fast charging.

The Samsung Galaxy S20+ looks a lot like the vanilla S20. The only difference is an added imaging sensor due to which the camera aisle is slightly thicker. Apart from this, it has the same punch hole in the center of the display. 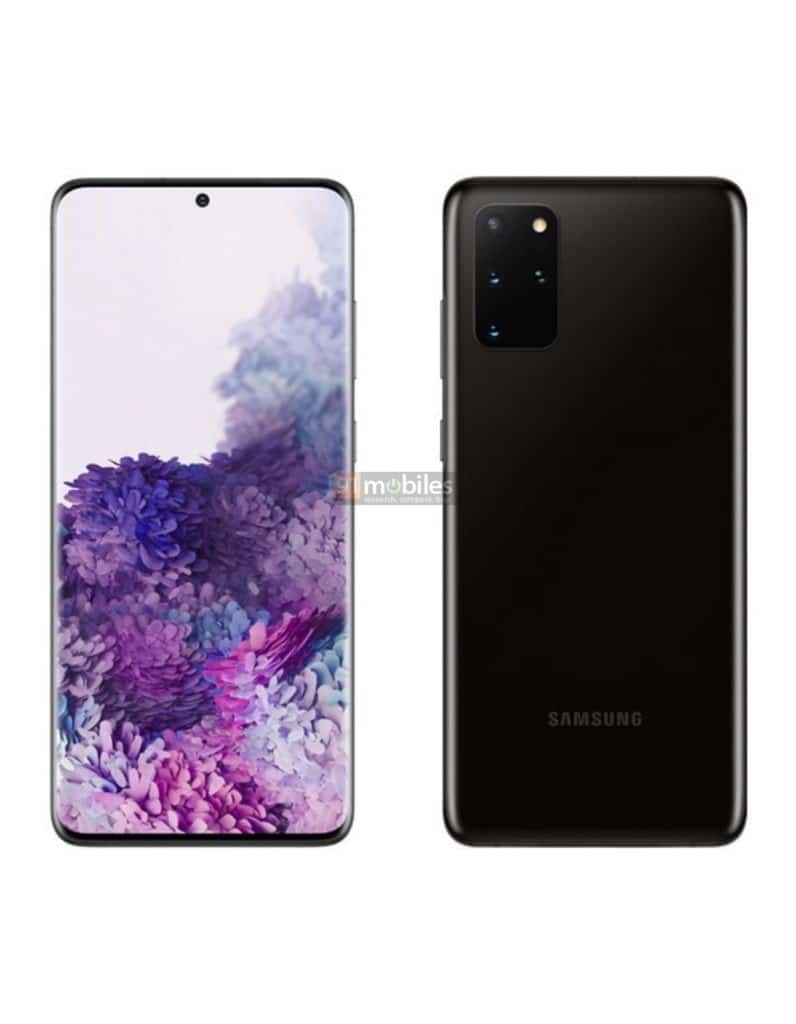 All the smartphones, including the Samsung Galaxy S20+, will be powered by Snapdragon 865 or Exynos 990 depending on the region. The SoC will be topped by 8 GB or 12 GB of RAM and 128 GB expandable onboard storage.

It will also come in two variants, i.e. 5G and non-5G. Moreover, like the other smartphones of the series, it will run on Android 10 topped with One UI 2.0.

Camera-wise, the Samsung Galaxy S20+ has specifications similar to the vanilla S20. The only difference is an added ToF sensor. Apart from this, the selfie camera and the rear camera specifications and features are identical.

The smartphone will be powered by a 4500 mAh battery backed by 25W of fast charging.

This maxed-out variant of the series, according to leaked renders, is expected to come with a huge camera aisle, approximately half as wide as the phone itself. The design has been getting a lot of mixed reviews. The camera aisle consists of a quad-sensor camera and an LED flash. The aisle is divided into two parts based on the texture. The relatively glossy part houses the camera sensors while the matte part at the bottom holds the LED flash.

The Galaxy S20 ultra will be built around a 6.9-inch WQHD+ (1440 x 3200 pixels) Dynamic AMOLED display featuring a punch-hole similar to its siblings. 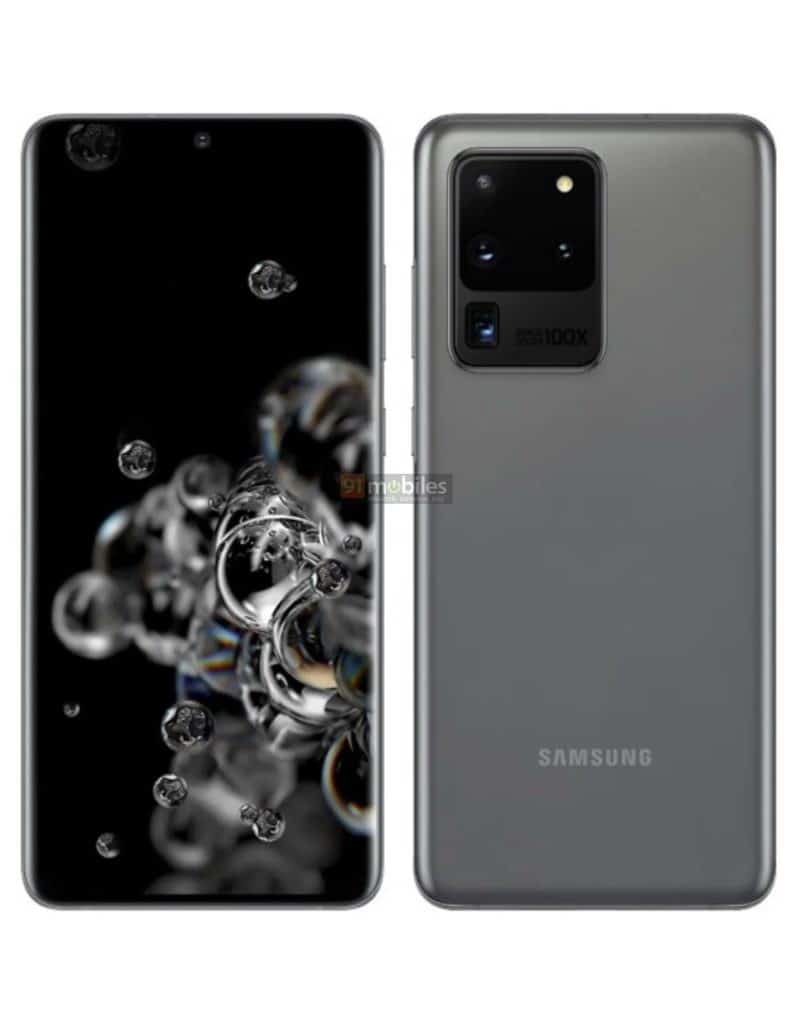 The smartphone will be launched in only one variant with 5G support. Just like its siblings, it will come with Snapdragon 865 or Exynos 990 at the helm, depending on the region. The SoC will be accompanied by a whopping 16 GB RAM and 512 GB onboard storage. the software specifications are similar to S20 and S20+.

If rumors are to be believed, Samsung has outdone itself when it comes to the cameras of S20 Ultra. The smartphone will boast a quad-sensor rear camera with a 108 MP main sensor joined by a 48 MP telephoto lens, 12 MP ultra-wide sensor and time of flight sensor.

At the front, the smartphone will feature an impressive 40 MP single sensor for selfies.

Unlike the previously launched Samsung Galaxy Fold, this folding smartphone is phone-sized that can even get smaller thanks to its clamshell folding mechanism. The smartphone’s purple variant was making rounds on the internet a few days ago.

It will come with a horizontally aligned dual rear camera system mounted beside the mini display that shows important notifications and time.

The Samsung Galaxy Z Flip is built around a 6.7-inch Dynamic AMOLED Infinity-O display with 2636 x 1080 resolution and a 22:9 aspect ratio. The display will feature an ultra-thin glass (UTG) and plastic film for protection. Apart from this, for the notification display, the phone will sport a mini 1-inch screen. The device gives a bulky look based on the leaked renders and images. 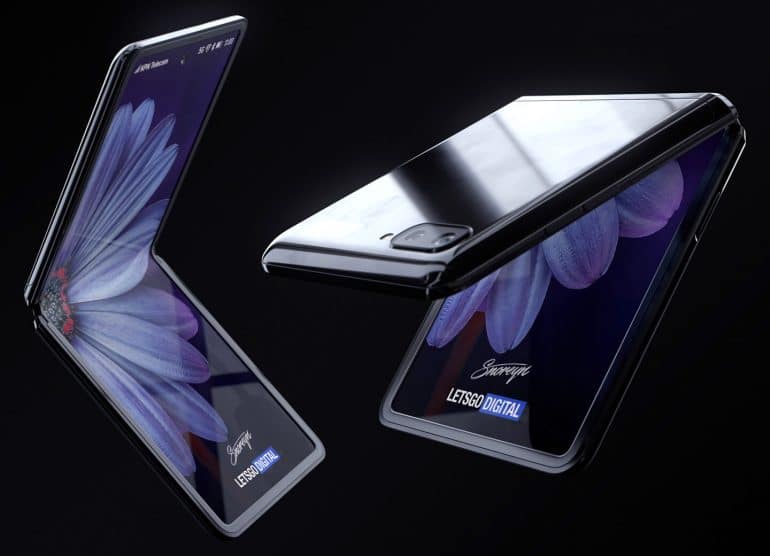 Other than this, the smartphone will also be launched in a Thom Browne edition, featuring the designer’s signature stripes. The phone, its casing, and the galaxy buds will be tweaked externally with hard-to-miss red, white and blue bars on top of a silver background.

As for the innards, the smartphone will most likely be powered by a Snapdragon 855+ chipset topped with 256 GB onboard storage and 8 GB RAM. According to Winfuture, it will not come with support for storage expansion.

Samsung Galaxy Z Flip will run on One UI 2.1 based Android 10 OS.

The smartphone will be equipped with a dual-camera on the back featuring a 12 MP primary sensor and a 12 MP secondary sensor. On the front, it is expected to come with a 10 MP single sensor.

The whole package will be most probably fueled by a 3300mAh backed by 15 W fast charging.