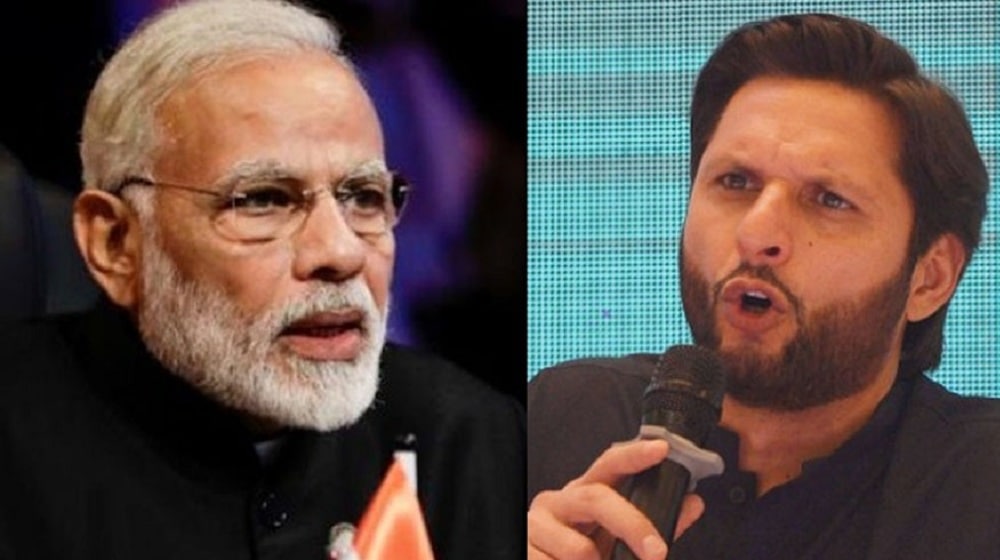 Former Pakistan captain, Shahid Afridi, has accused Indian Prime Minister Narendra Modi of being the culprit behind the turbulent relations between Pakistan and India.

During an interview with Cricket Pakistan, the hard-hitting batsman said that I do not see bilateral series between Pakistan and India until Modi is in power.

I think we will not get a response from India until Modi is in power. We have all understood his mindset now. His mindset can only take you towards negativity. That one man can ruin the relationship between the two countries which the people on both sides are against.

Shahid Afridi praised the PCB for organizing the entire PSL tournament in Pakistan for the first time and said:

The PSL 5 coming to Pakistan is very big for me. We could see when Sri Lanka, Bangladesh came and the World XI came that cricket would return to Pakistan. We were very hopeful for its return. I would like to give the PCB and the management the credit of organizing the entire HBL PSL in Pakistan. This is a very big achievement. This will send a positive message to everyone about how much love the fans here have for cricket and have been missing it.

Afridi also urged PCB to increase the number of teams in PSL:

People are not rating Multan Sultans as one of the best teams in the tournament. In T20 cricket your combination is the most important factor. The first two matches of the tournament are always very important. I think that our bowling and batting departments are very good. I have some doubts about our fielding though. Fielding plays an important role in all formats in cricket today. I think we will have to step up in the fielding department.

Regarding the reports of incidents of ball-tampering and spot-fixing in the PSL, Afridi said:

Until you set an example things such as spot-fixing scandals will continue to happen. You have to set an example when someone does something like that.