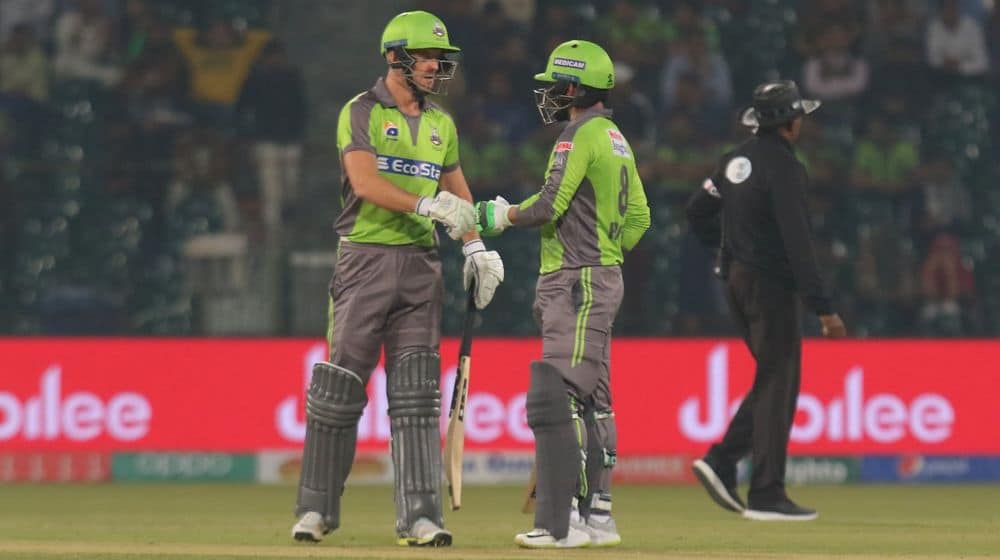 Lahore Qalandars won the toss and chose to field first in a 12-overs game in Rawalpindi.

Wet outfield reduced the match to 12 overs per side as Zalmi were asked to bat first in front of another electric crowd in Rawalpindi.

It was a tailor-made game for someone like Tom Banton, who got going straight away. Banton’s 15-ball-34 included 4 fours and 2 sixes, however, it was Haider Ali, the future star, who lit up the stadium with his blistering strokeplay. The teenager hit 4 sixes to score 34 from just 12 balls.

Lewis Gregory, Darren Sammy and Wahab Riaz all chipped in to help Zalmi post a solid target of 133 for Qalandars to get their first points.

If Qalandars were to chase a target at over 10 runs an over, Chris Lynn and Fakhar Zaman had to bat out of their skin. While Lynn started off in an aggressive manner, his wicket put the brakes on his team’s run-scoring.

Fakhar, who was given a reprieve, failed to make it count and got out later without doing much damage. After these two, there were no real hard-hitters to win it for the Qalandars. Captain, Sohail Akhtar sent in Samit Patel ahead of him, which was an out of the world decision considering his own ability to hit the ball.

Somerset all-rounder, Lewis Gregory was the pick of the bowlers, picking 4 wickets for just 25 runs.

If Lahore Qalandars are to fight for the trophy, this is the time to announce themselves. Short boundaries at Rawalpindi Cricket Stadium will suit their top order including Chris Lynn, Fakhar Zaman, and Mohammad Hafeez.

However, they need to play as a group and if Sohail Akhtar can marshal his troops well, Qalandars can still be a contender for the title. Peshawar Zalmi have also been rusty and they will look to get back on the winning track.

Rain will be a huge factor today and it seems, today’s match will likely be abandoned. If the play goes on, the batting second team will have to keep a close eye on DL par score.

There is a slight change in timings on Friday due to the prayers which is why both the matches are scheduled an hour later than the usual timings. Today’s second match is at 8:00 pm in Rawalpindi.

Darren Sammy XI are the clear favorites to win today if we look at the previous record between the two teams. Lahore Qalandars have won only one game from the 8 matches they have played against Peshawar Zalmi.

The teams are yet to sort out their best combinations and they will have to do it today if they are to press for the title.

Peshawar Zalmi:
Kamran Akmal loves to play his shots and if there’s one stadium where he can play freely, its Rawalpindi Cricket Stadium.

Lahore Qalandars:
Fakhar Zaman can be quite a package for Qalandars especially with short boundaries on all sides in Rawalpindi.