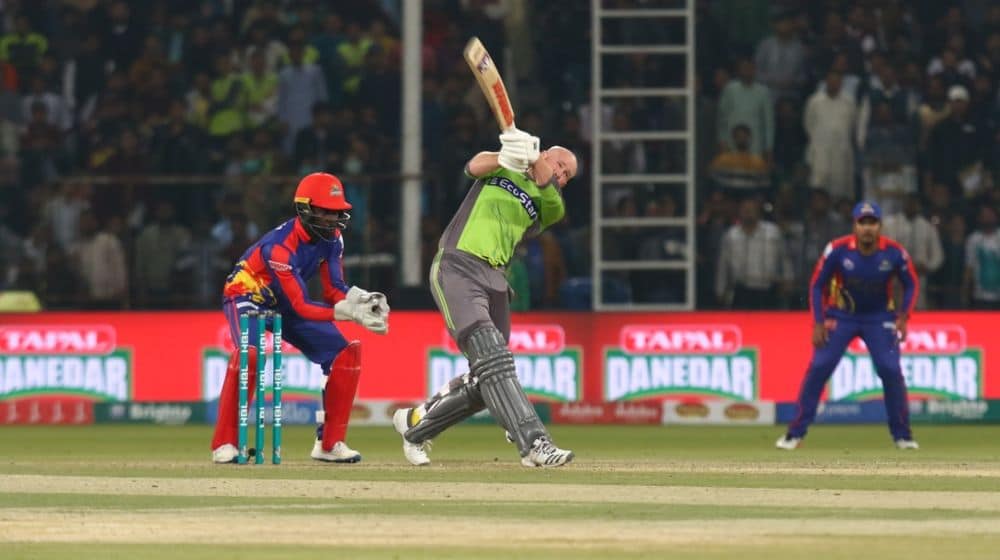 Karachi openers started off cautiously, however, it didn’t pay off as Sharjeel Khan was back in the hut after scoring just 5 runs. After his departure, Babar Azam and Alex Hales added 60 runs for the 2nd wicket to lay the platform. Babar got out after scoring 38 from 29 balls.

It was the partnership between Alex Hales and Chadwick Walton that meant trouble for the Qalandars as it was raining sixes in the last few overs. Hales went on to make another half-century as he ended up with 80* from 48 while Walton played a handy cameo of 45 runs from just 20 balls. Both hit 5 sixes.

Karachi posted a big total of 187/5 in their 20 overs. Hales was dropped early in the innings by Lahore Qalandars and he later punished them big time.

Sohail played a captain’s knock, raising his first fifty of the tournament. However, it was Ben Dunk, their batting superhero, who turned up his A-game to entertain the fans.

The left-handed batsman doesn’t even hit sixes when he’s in the mood and it was the same case tonight as he smacked 12 sixes to take his team to victory. He finished with another record-breaking 99* off just 40 deliveries.

One of the most intense rivalries is back as Lahore Qalandars take on their arch-rivals Karachi Kings in today’s second match.

To stay in contention, Qalandars need to win all of their matches and hope that the other teams help them out in qualification, much like Pakistan. The home team will be pumped up following a thumping win over Quetta Gladiators last night, however, Karachi Kings will also be hoping to put a good show as their next match will be against the Qalandars in Karachi.

Karachi Kings have enjoyed an upper hand against Lahore Qalandars in the 8 matches they have faced each other. Karachi have won 5 while Lahore are slightly behind with 3 wins.

Sharjeel Khan has started to provide quick starts to Karachi Kings and he has the ability to win games for his team.