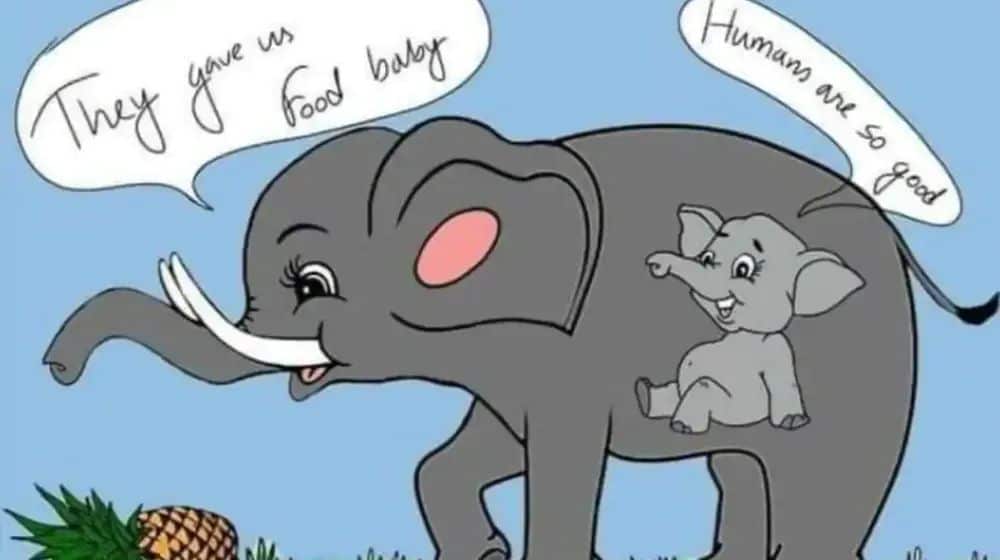 While humans are busy fighting the novel coronavirus, other species on earth are threatened by mankind. A pregnant elephant succumbed to death after locals in Kerala, India fed it with a pineapple that was filled with firecrackers.

According to the reports, the explosives injured the wild elephant’s jaw, tongue, and mouth, however, it survived the horrific incident for a week. It couldn’t eat or drink following the abuse and the body was later found in a river nearby after a week.

The local authorities have initiated a probe into the matter to bring the perpetrators to justice. The autopsy report said that the fetus was just a month old and members of the team cried when they saw it inside the carcass.

The heartwrenching incident has us all in tears as social media users are posting their reactions under hashtags #RIPHumanity, #humanityisdead, #ElephantDeath as well as a few others. Let’s have a look at what the people are saying about the tragic loss:

Warning: Some of the images are graphic. Viewer discretion is advised.

Central Government has taken a very serious note of the killing of an elephant in Mallapuram, #Kerala. We will not leave any stone unturned to investigate properly and nab the culprit(s). This is not an Indian culture to feed fire crackers and kill.@moefcc @PIB_India @PIBHindi

No mother should ever feel this pain and no child should ever lose his life this way 💔#RIPHumanity pic.twitter.com/BKRBHz9xoQ

#RIPHumanity
it's second incident in kerala, literacy rate of Kerala 94%

Omg😢This is really cruel🙄 Just wondering & painful how #inhumane to feed a pineapple full of fire crackers to pregnant #Elephant 😢even after the elephant was injured, she didn’t even harm a single human,This is cruel beyond measure, Humans doesn’t deserve nature #RIPHumanity pic.twitter.com/cvcC9lR9jZ