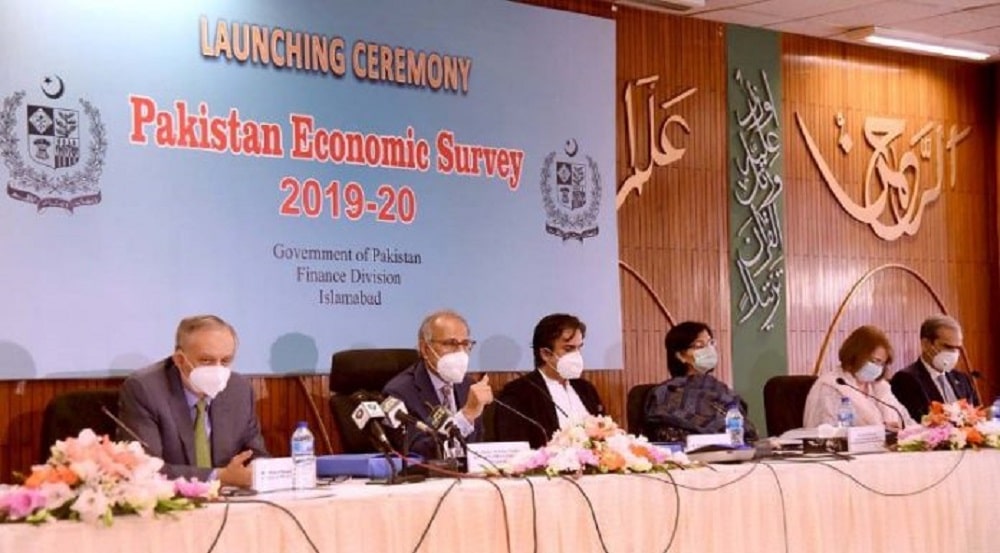 Adviser to the Prime Minister on Finance and Revenue Dr Abdul Hafeez Shaikh has acknowledged that COVID-19 has inflicted losses of around Rs. 3 trillion and derailed the economy towards the negative growth of 0.38 percent.

This was revealed by Adviser to Prime Minister on Finance Dr Abdul Hafeez Shaikh, while launching the “Economic Survey 2019-2020”.

Hafeez Shaikh said the fiscal year 2020, before the coronavirus spread, showed dedicated efforts of the government for addressing structural issues that had caused macroeconomic imbalances back in the FY 2018. He said the country’s economy was stabilizing before the outbreak of coronavirus pandemic (COVID-19).

The economic reforms program and its implementation, he added, was also acknowledged by the international financial institutions while International Monetary Fund (IMF) had declared that Pakistan’s program was on track and bearing fruits for its economy.

He said the pre-COVID-19 economic recovery was also supported by macroeconomic indicators such as the decline in the current account deficit, the build-up of foreign reserves, and stable exchange rate on the external side.

On the fiscal side, he said, there were significant improvements in all major indicators and the trend continued till March 2020, implying that the fiscal consolidation was on track. The primary balance had witnessed a remarkable turnaround as it had posted a surplus of Rs. 193.5 billion during July-March FY2020 against a deficit of Rs 463.3 billion last year.

He said the government had repaid around Rs. 5,000 billion loans and was successful in reducing its expenditures, while no ministry or division was provided any supplementary grant.

The advisor said the non-tax revenues also increased from Rs. 1,100 billion to Rs. 1,600 billion, which was a big jump.

However, Hafeez Shaikh added, due to the COVID-19 outbreak, the economy had suffered a lot and it is now estimated to grow at negative 0.38 percent against the predictions of around 3 percent.

Pakistan, he said, is not alone to face the hostile situation as the world economy has suffered a lot due to the spread of coronavirus.

He said that the International Monetary Fund (IMF) had predicted 3.4 percent downfall in the world GDP (gross domestic product). The developing economies, however, were likely to suffer more as their exports and remittances would decline owing to decreasing demand in the international market, he added.

The advisor said that the coronavirus had inflicted a loss of around Rs 3,000 trillion to the national economy, with considerable difference between the growth targets achieved and those projected before the COVID-19 outbreak.

He said the agriculture growth also declined to 2.67 percent whereas there had been negative growth of 2.64 percent in the industrial sector and negative 0.59 percent growth in the services sector.

Likewise, he said, the pandemic affected the country’s exports and was expected to affect the remittances, which had so far been on track.

The advisor said that the collection of the revenue was also badly damaged by the coronavirus as against the expected target of Rs. 4,700 billion, we might hardly reach Rs. 3,900 billion during the current fiscal year.

Dr Hafeez Shaikh said that during the outgoing fiscal year, the exchange rate of rupee remained stable at actual value contrary to the past when it was artificially kept low. It helped decrease imports and increase exports.

He said the fiscal deficit was 4 percent of the GDP during July-March 2019-20 as compared to 5.1 percent in the corresponding period of the last financial year.

He said during the outgoing fiscal year, the Foreign Direct Investment (FDI) in the country posted a reasonable increase of 137 percent which reflected the foreigners’ trust in the present political leadership.

Replying to another question about the public debt, Hafeez Shaikh said during the outgoing year, an increase of Rs. 7.5 trillion in public debt was recorded, out of which only Rs. 1.5 trillion was utilized for public expenditures and the remaining for repayment of principal debt amount and interest. This year Rs. 2.7 trillion was used for debt servicing.

With respect to trade, he said during the pre-COVID period, Pakistan’s export sector was performing better than most of its competitors despite the challenging external environment. During July-February 2019-20, exports reached $15.6 billion as compared to $15.1 billion last year posting a growth of 3.6 percent.