Tesla has had the entire automotive industry experience a fair number of firsts ever since its foundation. For starters, it has been the first company to revolutionize the entire industry that’s been powered by Internal Combustion Engines for well over a century. It was the first company to have huge commercial success in mass-producing and selling all-electric vehicles. And in the most recent development, Tesla has claimed the throne of the most valuable automaker in the world from Toyota for the first time in 8 years.

Tesla’s radical approach to automotive innovation has earned them a huge number of loyal and enthusiastic customers and investors. Due to the rapidly growing customer and investor-base, the company’s shares, that have already doubled in value since the beginning of 2020, have gone up even further by 3.5% during the intra-day trading on July first, causing the stock to jump to $207.2 billion, higher than Toyota’s $201.9 billion. 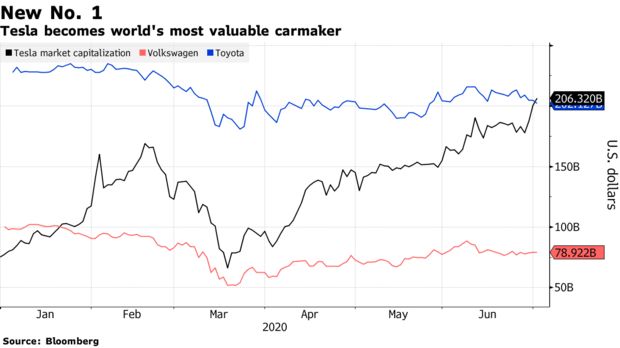 Although, Elon Musk’s cryptic business development and marketing strategies have earned both, the company and its owner a billionaire-celebrity status, in terms of the sheer scale and global market presence, Tesla still remains a mere fly in Toyota’s soup.

To give some perspective, Tesla churned out 103,000 units in the first quarter, whereas Toyota produced almost 2.4 million units. This production scale is made possible by the automaker’s decades-old reputation for making reliable machines and a huge demand for their cars around the world as a result of their reputation.

Still, it remains a huge milestone for Tesla, a company that’s just 16 years old, to blow past Toyota in terms of stock value, which is a company that’s been around for a better part of the century. It only goes to show the wonders they can achieve if they start to focus on cost efficiency in large scale manufacturing. Still, with the recent series of events, this ‘David vs. Goliath’ rivalry has just become a whole lot interesting.