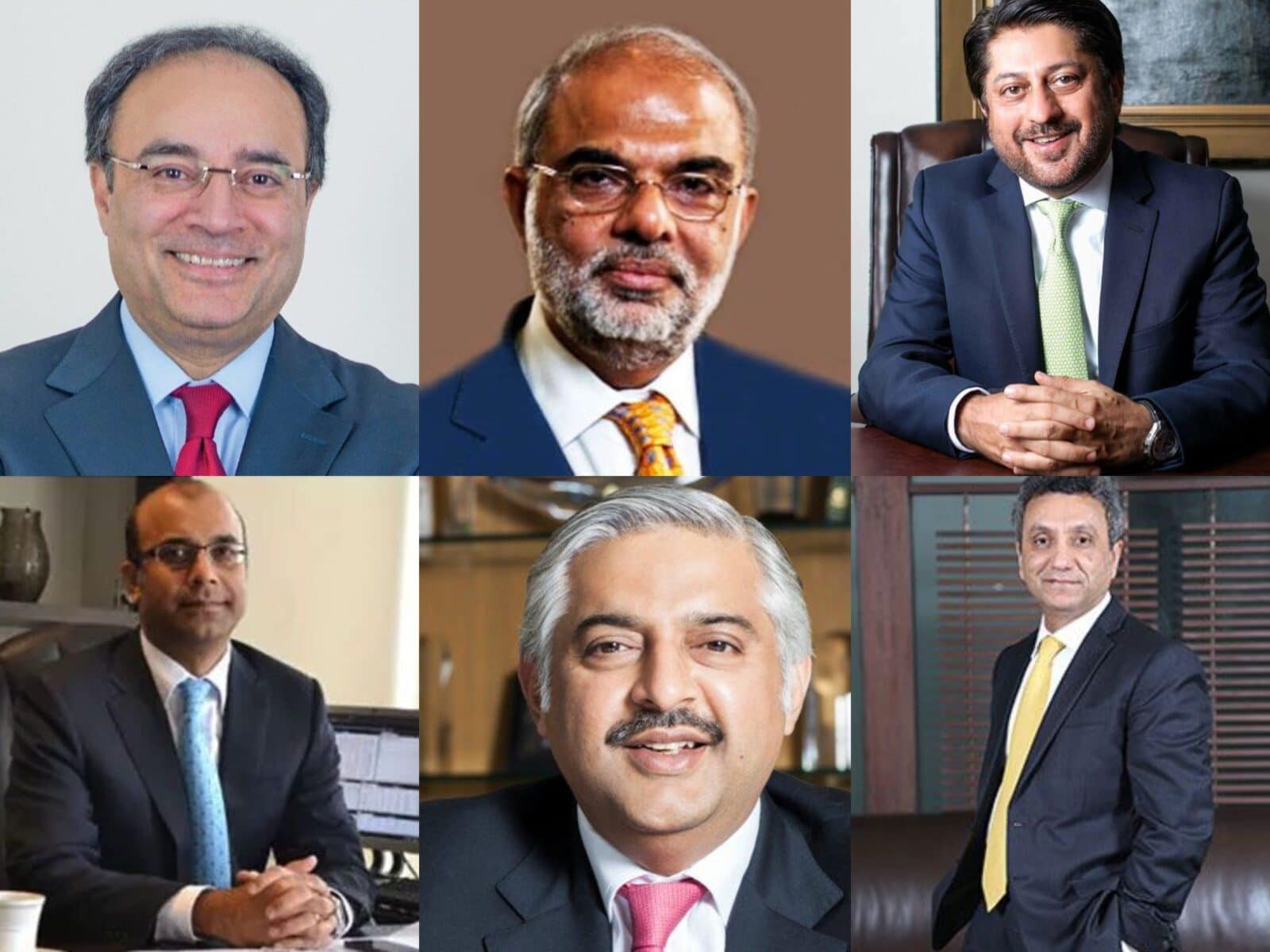 Pakistan’s banking industry is almost always in the green when it comes to finances. Driven by large players, the industry is highly competitive with 25 commercial banks besides microfinance banks and DFIs which altogether claim to have tapped 20 percent of the country as the banked population.

Who are the movers and shakers of the industry? Here is a brief review of their performances of the last year and the handsome salary packages they are drawing from the banks against their leadership.

These Pakistani Bank CEOs Had the Highest Salaries in 2018

The President and CEO of HBL is the most paid banker, the CEO and President of Habib Bank Limited. In 2019, he drew a salary of Rs. 219 million which is the highest in the banking industry.

He leads the bank which he is paid for but is also the representative of the whole banking industry being the chairman of Pakistan Banks Association.

He moved from JP Morgan and was given charge of HBL in late 2018. In 2019, the bank’s financial performance has been quite impressive with 41 percent year-on-year growth. The bank retained its 5th position in terms of profitability in the outgoing year.

Having a vast exposure to international banking, he seemingly is simply pushing forward the previous policy to scale back the international operations of the bank along with a focus on the local business with diversified strategy and the increasing use of technology in the bank’s services and operations.

However, people are expecting something unconventional from him which could be termed as Aurgenzeb’s doctrine that could make a difference in the bank.

He is leading the bank along with the guards of 33 key management professionals at the EVP level that cost the bank Rs. 1.4 billion in 2019. The bank also paid a yearly fee of over Rs. 50 million to the board of directors in 2019.

Irfan Siddiqui of the Meezan Bank is the second-highest-paid banker in Pakistan. His salary package stood at over Rs. 215 million in 2019.

He is the founding President of the first and the leading Islamic bank of the country. Under his leadership, the foundations of the banking industry were established which ultimately resulted in the staggering growth of the bank in all fields from financial performance to business growth.

The soft-spoken banker is credited for the brilliant achievement and successes recorded by the bank in recent years, which are the rewards of his dedication to the bank and team efforts.

Under his management, the bank jumped up to 6th most profitable bank of the country in 2019 from the 8th in 2018. The bank recorded 70 percent profit growth in the same year. He functions with the cabinet of 19 senior bankers which the bank paid Rs. 601 million in 2019.

Shahzad Dada is a renowned name in the banking industry and the corporate sector. He is the third highest-paid banker in Pakistan leading a UK-based bank for more than three years. He made an income of Rs. 171 million in 2019.

Under his management, he focused on profit, people, and customers, shutting down all branches which were not meeting the set targets. The bank explored various opportunities to retain its customers through digital assets and generated revenues from the corporate banking and advisory side.

The bank’s performance has been outstanding for the past three years. Interestingly, Dada drew Rs. 175 million in 2018, a slightly higher income than the succeeding year.

He bid adieu to the bank and joined United Bank Limited earlier this year. He is expected to make a difference in UBL’s operations, services and balance sheet soon.

Nauman Ansari is a banker who personally achieved tremendous growth in his salary package. He has been awarded a handsome raise of Rs. 45 million that made up his yearly income of Rs. 154 million in the outgoing year.

Under his three year term, he successfully pushed the bank towards progress that ultimately made an all-time high profit of its history in 2019, which stood at Rs. 12.6 billion. And, Bank Alfalah has been recognized as the best bank of Pakistan for 2019.

Surprisingly, he is no more at the bank and handed back the bank to the same person who was heading the bank before him.

Mohsin Nathani is the fifth highest-paid banker in Pakistan’s banking industry. Although his bank wasn’t even among top ten banks in terms of profitability his previous experience made his price high. In 2018, he drew an annual salary of Rs. 113 million.

Nathani came back to the Pakistani market in late 2018 from Habib Metro Bank. He was the former President and CEO of Standard Chartered Bank from 2010 to 2013. He was deputed to Standard Chartered in UAE as the top banker which he quit after serving for a brief period.

The seasoned banker has quite a good understanding of the local market however he could not elevate the bank in terms of profitability in the prevailing competitive environment. The bank’s customer services are much better than other banks.

Imran Maqbool is the CEO and President of MCB Bank, Pakistan’s most profitable bank – a title that the bank has retained for two straight years.

Imran maintains a long association with MCB Bank, serving the bank as the President and CEO for nearly seven years. His performance at the bank has been remarkable during the period which included the merger with NIB Bank and the institution of MCB Islamic Bank.

The man is also interested in acquiring a public sector and loss-making bank, SME Bank.

He received a salary package of Rs. 108 million in the last year with modest growth from 2018.

Shahid Sattar joined Samba Bank Limited in August 2013 and brought with him four decades of experience in the local and global banking and financial Industry.

He drew a salary package of Rs. 100 million in 2019 for leading a small bank with a network of branches that stood at just 40 in Pakistan with an asset value of Rs. 14 billion. The bank is witnessing a transition period as its major sponsor has entered into a merger deal.

Sima Kamil was the President and CEO of Pakistan’s second most profitable bank, United Bank Limited.

Her appointment at UBL made headlines as she was the first female President of a leading bank in the country’s banking industry. Madam President was handed over the charge at a time when the bank witnessed a scandal and a leadership crisis. She not only tackled it well but the bank also avoided the heavy penalty of millions of Dollars from the authorities in New York under her management. She was also quite popular among the staff members for giving them incentives and allowances.

However, the board of directors was reportedly not happy with her performance even though the bank reported consistent growth in profitability.

In 2018, Sima Kamil drew a salary package of Rs. 137 million which significantly reduced to Rs. 94 million in 2019, according to the annual financial report. She was not even offered a new service contract and was replaced by Shahzad Dada a couple of months ago.

There were rumors about her joining Allied Bank Limited recently but nothing was confirmed or announced about her new move. She came in rumors again as the next deputy governor State Bank of Pakistan but it has not been confirmed officially by the concerned ministry so far.

Bank Al-Habib is one of the fastest-growing banks in terms of customers, branches and services. The bank has been consistently reporting growth in profit for the past six years except in 2018, a year the bank saw a little drop in profit growth.

Under Mansoor Ali Khan, the bank reported an all-time high profit of Rs. 11.16 billion in 2019. The bank established a good reputation among the customers for its quality of service.

Mansoor Ali Khan is also included among the highly paid bankers of the country. He drew an annual salary of Rs. 90.3 million in 2019. He operates with 35 key team members whom the bank paid salaries of Rs. 446 million in 2019.

Yusuf Hussain is the top banker at Faysal Bank. He is spearheading the bank towards a historical transformation from conventional to Sharia-based banking. Although his predecessor commenced this drive three to four years ago, he is likely to conclude the conversion in 2020 or mid of next year.

Yusuf Hussain drew an annual salary of Rs. 79 million while his management, which consists of 18 key executives, cost Rs. 278 million per annum to the bank.

The bank overtook its immediate competitor Askari Bank in profitability and branch network with consistent growth to be ranked as the 11th largest bank of the country.

Arif Usmani took charge of the state-owned bank under the present government.

He is currently introducing various innovations in the bank to introduce banking and money transfer services to a wide population in every nook and corner of the country.

He was given an annual remuneration of Rs. 58 million in 2019 which is Rs.10 million lower than his predecessor. His management team costs Rs.459 million as compared to the previous management which cost Rs.394 million.

CEO and President Tahir Hassan Khan is the CEO of Allied Bank Limited, one of the most important and major players of Pakistan’s banking industry. He has been associated with the bank for over 12 years and is trying to maintain the position of the bank.

In 2019, Allied Bank Limited dropped from 4th place to 6th place in terms of profit. The bank recorded a profit of Rs. 9.405 billion in the period as compared with Rs. 9.968 billion last year, showing a drop of 6 percent in profit. The bank has become the fifth in the industry to mobilize deposits of over Rs. 1 trillion.

Tahir received an annual remuneration of Rs. 56 million from the bank along with perks and other benefits. He is supported by 18 key bankers of the management who got Rs. 398 million in 2019.

Considering the penetration and assets value of the bank, its role should be broader like the competitive banks mainly through technological applications and saving products.

The competition among banks has become more intensified with different evolving challenges and emerging risks. Banks’ performance will be based on the strategy and vision of the leadership including its CEO and the management in the era of technology. Maintaining growth in profitability on the balance sheet is the key while providing innovative services to the customers and making investments in the lucrative ventures along with the government borrowing schemes are major tasks.

By the end of 2020, banks’ ratings in terms of profitability may vary because of immense competition and it will all depend on the leadership and the management of banks.