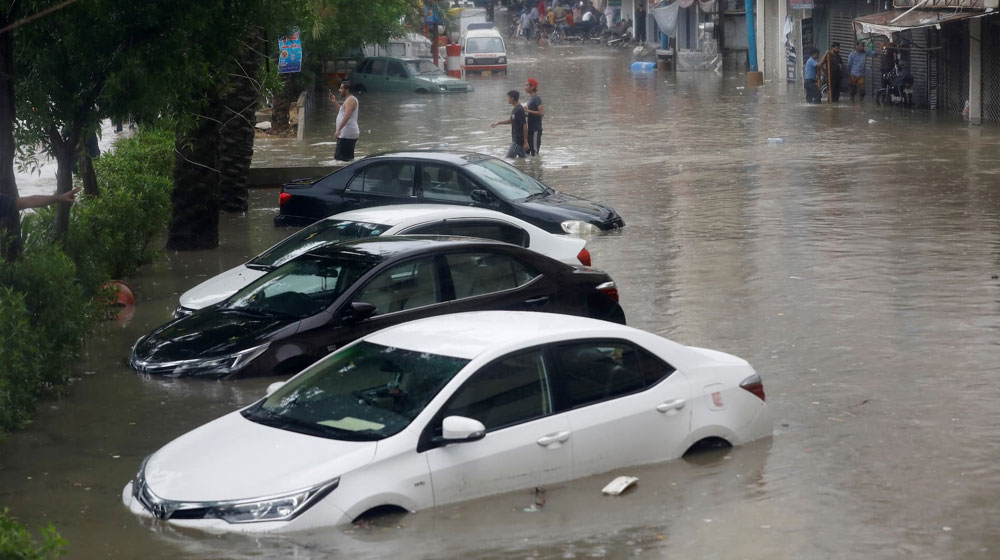 Karachi’s roads and streets became like those in Venice as rainwater mixed with sewerage water gushed into houses with persistent and torrential rains submerging most parts of the city.

Torrential and unceasing rain caused land-sliding near Munawar Chaurangi, Gulistan-e-Johar, and damaged several vehicles, with no reports of casualties.

PMD Predicts Heavy Rain & Thundershowers in Most Parts of The Country

The Met Office said that the current spell of monsoon rain broke the decades-old record, as it continued to downpour for more than 12 hours. The PMD officials noted that 345 millimeters of rain was recorded at the PAF Faisal Base, breaking the previous record of 298.4mm of rain recorded in 1984.

The Masroor Base received 271mm and Karachi Airport 241mm rain this year, which is 300 to 400 times more than average rainfall in the port city in August.

Another Spell of Heavy Rains to Hit Karachi Tomorrow

Shara-e-Faisal – Karachi’s main traffic artery – is entirely underwater from Kala Board to Baloch Colony flyover and Nursery, with rainwater touching the car roofs.

According to the forecast, the ongoing spell of rain will continue till Thursday, with more rain expected on the Wednesday-Thursday night.