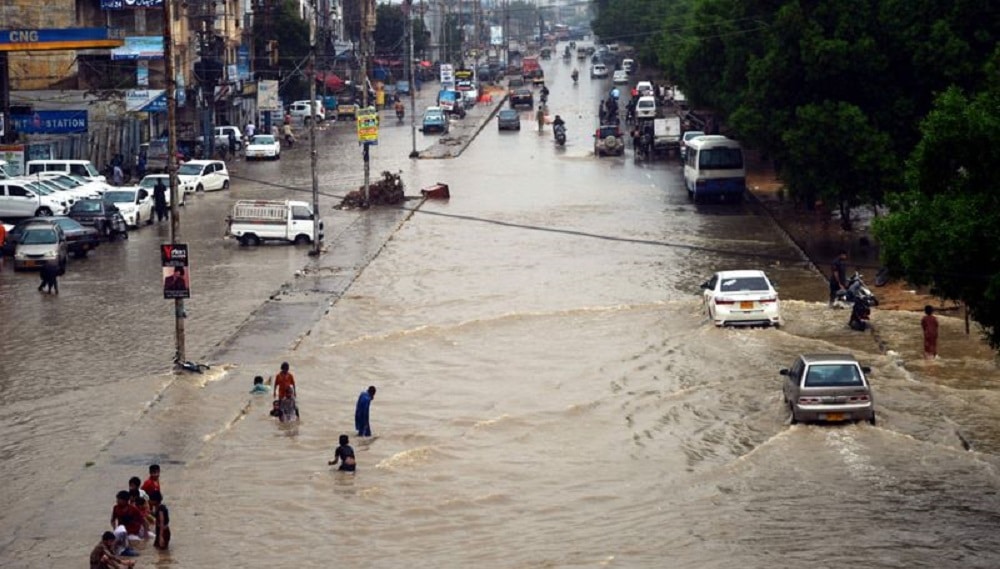 The rainfall has wreaked devastation across the city as the streets and homes of the metropolis have been inundated, rendering damage to property worth billions.

According to various reports, 41 people have lost their lives in different rain-related incidents across Karachi.

Pakistan Meteorological Department (PMD) has predicted another spell of torrential rainfall and subsequent flooding in the next 48 hours all over the country.

There have been reports of people getting stuck in office buildings and remote areas with no means of transportation.

In unprecedented times such as these, failure and degradation of telecommunication and internet services and electricity outages have only aggravated the woes of the residents of Pakistan’s biggest city.

Citizens have reported that most telcos and internet service providers have been down across the city due to infrastructure damage. Since early morning, telecom networks have also been disabled in several parts of the city due to Ashura processions, as per the instructions of the interior ministry.

With no network coverage and electricity, citizens have no way to communicate with their loved ones, both in the city and the rest of the country.

Rain in Karachi Broke All Records During the Last 24 Hours

Citizens have demanded that the government should make special arrangements to restore telecommunication and internet services and electricity.

Commenting on the issue, the PTCL spokesperson said:

The torrential rainfall in Karachi has brought life to a standstill and as a result, our connectivity services are also impacted. This is an unprecedented situation due to which, we are facing a lot of challenges in provision of seamless services in many areas. We sincerely apologize for the inconvenience caused. Rest assured, our dedicated teams are working round the clock for service restoration.

Meanwhile, Zong has imposed a network emergency in the southern region including Karachi and has ensured to restore connectivity by mobilizing all resources at its disposal.

In an official statement, Zong said:

Zong is completely aware of the situation in Karachi and cognizant of the distress its customers are passing through at the moment. Zong wants to reassure that the company stands with the people of Karachi as its technical teams are tirelessly working to restore suspended connectivity.

The citizens are asking the government to allow the network providers to provide services wherever possible and take back its decision of disabling networks due to Muharram processions.

Here are some tweets from Karachi residents describing their ordeal following the heavy rainfall and resultant suspension of telecom and internet services and power outages.

Karachi has been hit badly by heavy rains. No network since evening 27 Aug 2020 and no electricity, generators are continuously in use and it’s diesel / petrol from pumps is also not available nearby.

I Pray & wish you all are safe and sound.
Ameen

karachi's situtation is miserable since yesterday
DHA seems like a lake
my car is drowned, no electricity, not a single drop of water in taps even my tank is flooded with gutter ka paani
sonay par suhaga : no network service
Allah madad!!!

My family in Karachi has been out of touch since last 4 hours now. They ran out of diesel at some point so no electricity. Phones not charged, land lines & WiFi down. No way to know how serious the situation is at home. My father is 76 years old. I am worried sick☹️. #KarachiRain

I understand till a certain extent why @KElectricPk shuts off power, cause they have unmanaged wires – @jazzpk what exactly is YOUR excuse for no mobile signals? You have no lines, isn’t it all satellite? FFS Yaar, what fresh new hell is this?

From electricity to no phone service, Karachi in disarray. pic.twitter.com/0I4bnpPDld

@KElectricPk has pretty much given up on Karachi. No electricity in Clifton for over 27 hours now. I pray there’s special place in hell for them.

26 hours no electricity, no phone signals, Karachi city is having a very worst time, people are suffering from many problems, may Allah reward those who are helping people even in this difficult situation.#StaySafeKarachi