The State Bank of Pakistan released their Liquid Foreign Exchange reserves report on Thursday, October 8, 2020, showing a decline of $183 million, or 0.93 percent, by 2 October 2020.

The total liquid foreign exchange reserves held by the country stood at $19.351 billion, compared with $19.534 billion in the previous week. While the net reserves with the SBP dropped from $12.359 billion to $12.154 billion.

“SBP made external debt repayment of $580 million. After accounting for official inflows, including $300 million received from [the] Asian Development Bank (ADB), [the] SBP reserves decreased by $205 million to $12,154.7 million,” the central bank said in a statement. The foreign exchange reserves of commercial banks; however, marginally rose from $7.175 billion to $7.196 billion. 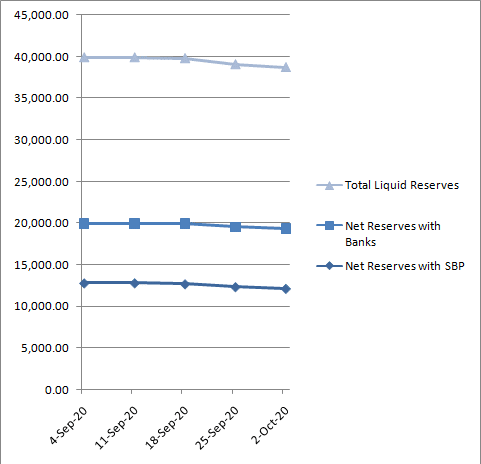 Pakistan received the first loan tranche of $991.4 million from the International Monetary Fund (IMF) on July 9, 2019, while the second installment came in late December of around $454 million, both of which significantly helped to improve the reserves. In December 2019, the foreign exchange reserves surpassed the $10 billion mark owing to inflows from multilateral lenders including $1.3 billion from the Asian Development Bank (ADB).

More recently, the reserves jumped on account of $2.5 billion in inflows from China. A few months ago, the SBP successfully made foreign debt repayment of over $1 billion on the maturity of Sukuk.