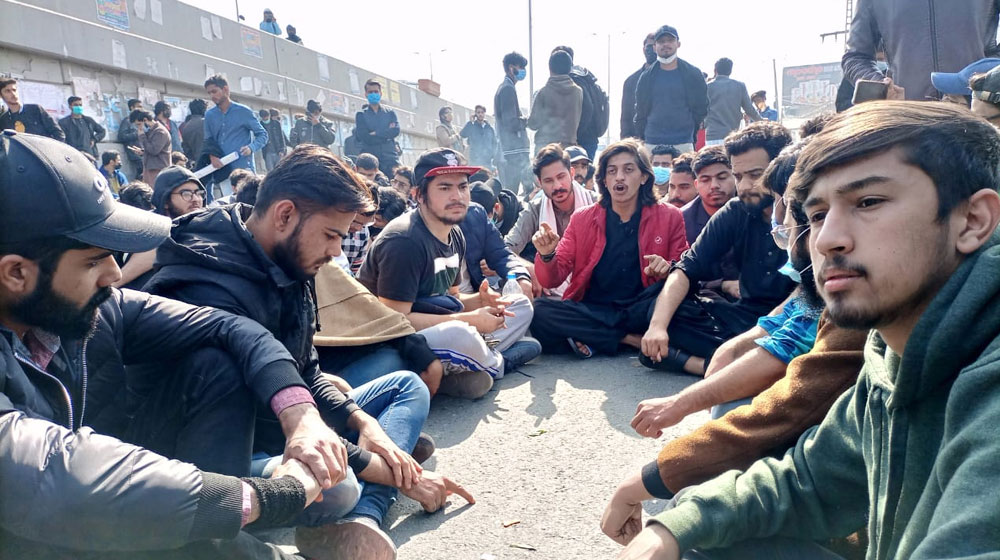 A number of students of a private university in Lahore are protesting against its demand for the payment of full fees despite the closure of the campus throughout the last year.

The protest that was held outside the campus in the provincial capital had students demanding a review of the fee structure as they had not attended on-campus classes for a year.

Meanwhile, negotiations between the university’s administration and the protestors are underway. The administration has also stated that the institution will reopen from 1 February as per its policy.

Protests are also being held across the country against on-campus examinations. Several students of the University Of Engineering Technology (UET) and the University of Management and Technology (UMT) were injured as a result of being baton-charged by the police outside the universities on Monday.

Despite being baton charged and facing police brutality earlier today, students are continuing their protest outside UMT in Lahore pic.twitter.com/M2q5Sfckpe

Students are gathering outside UMT to protest against Ghunda Gardi of Punjab Police which baton charged students. Some students including president @PSCLahore @ZubairSiddiuqui are critically injured and have been taken to ICU #PoliceAttackedStudents #StudentsKoInsafDo pic.twitter.com/uKNRVkcFlf

Following the episode, the Federal Minister for Education, Shafqat Mahmood, had requested the Higher Education Commission (HEC) to consult the Vice-Chancellors of the universities and to consider conducting online examinations based on the unusual circumstances this year.

As per media reports, Lahore’s UMT and the University of Peshawar have revoked their decisions to hold in-person examinations following the protests by the students.