Although it is a positive gesture, the promotion’s tagline “your safety is our top priority” seems to be receiving a lot of criticism from the public. 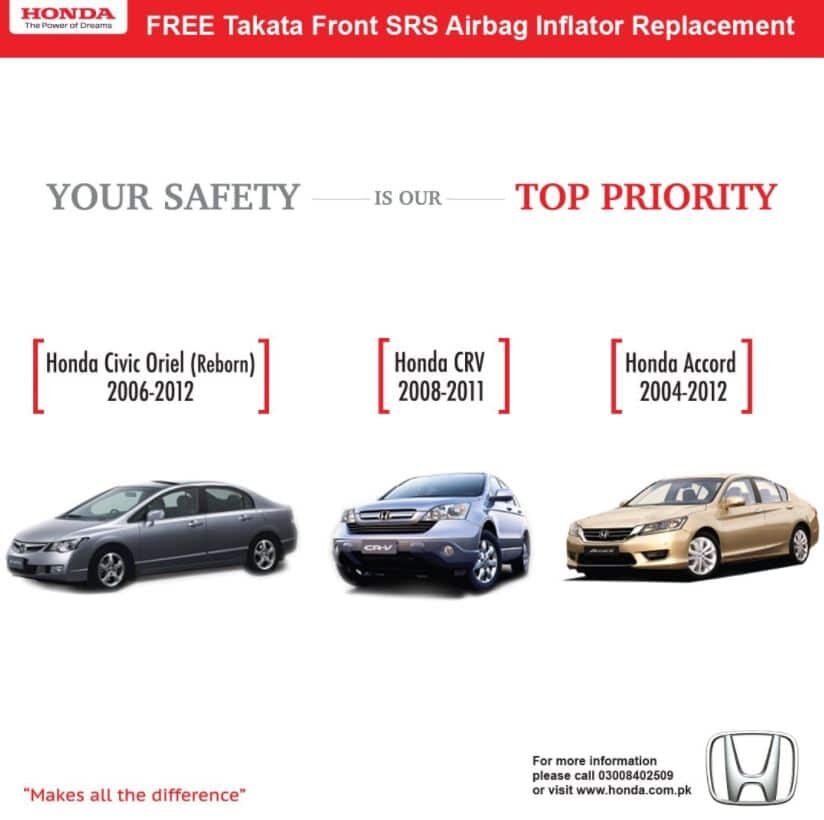 Ironically, the fifth Honda City — which has been sold brand new in Pakistan for the last 12 years — does not have an airbag, which implies that Honda Atlas’ marketing statement goes against its business practices, especially in the Pakistani market.

The public is of the view that the automaker has the audacity to release this statement despite selling “compromised products” in the market for a huge amount.

People have started becoming more vocal about their opinions since the arrival of new options in the market like the Toyota Yaris and the Changan Alsvin that offer more features than the two generations old Honda City, with the Alsvin being considerably cheaper as well.

It bears mentioning here that Takata’s faulty airbags resulted in millions of vehicle recalls a few years ago. Takata is a Japanese automotive parts manufacturer that supplies parts to numerous major carmakers around the world. All three vehicles in the “free service” were actually part of the global recall.

Foxconn to Launch its First Smart Car and EVs This Year

Takata’s was one of the biggest recall campaigns in history, where almost 75 million vehicles were recalled around the world due to malfunctioning inflator units or exploding airbags that resulted in numerous injuries and fatalities.

Furthermore, nearly all reported injuries (both fatal and minor) were recorded in Honda vehicles, which is something that still perplexes the analysts to this day. Given that fact, it is time, once again for the Honda owners to pay a visit to the nearest dealers and get their cars fixed on an urgent basis.