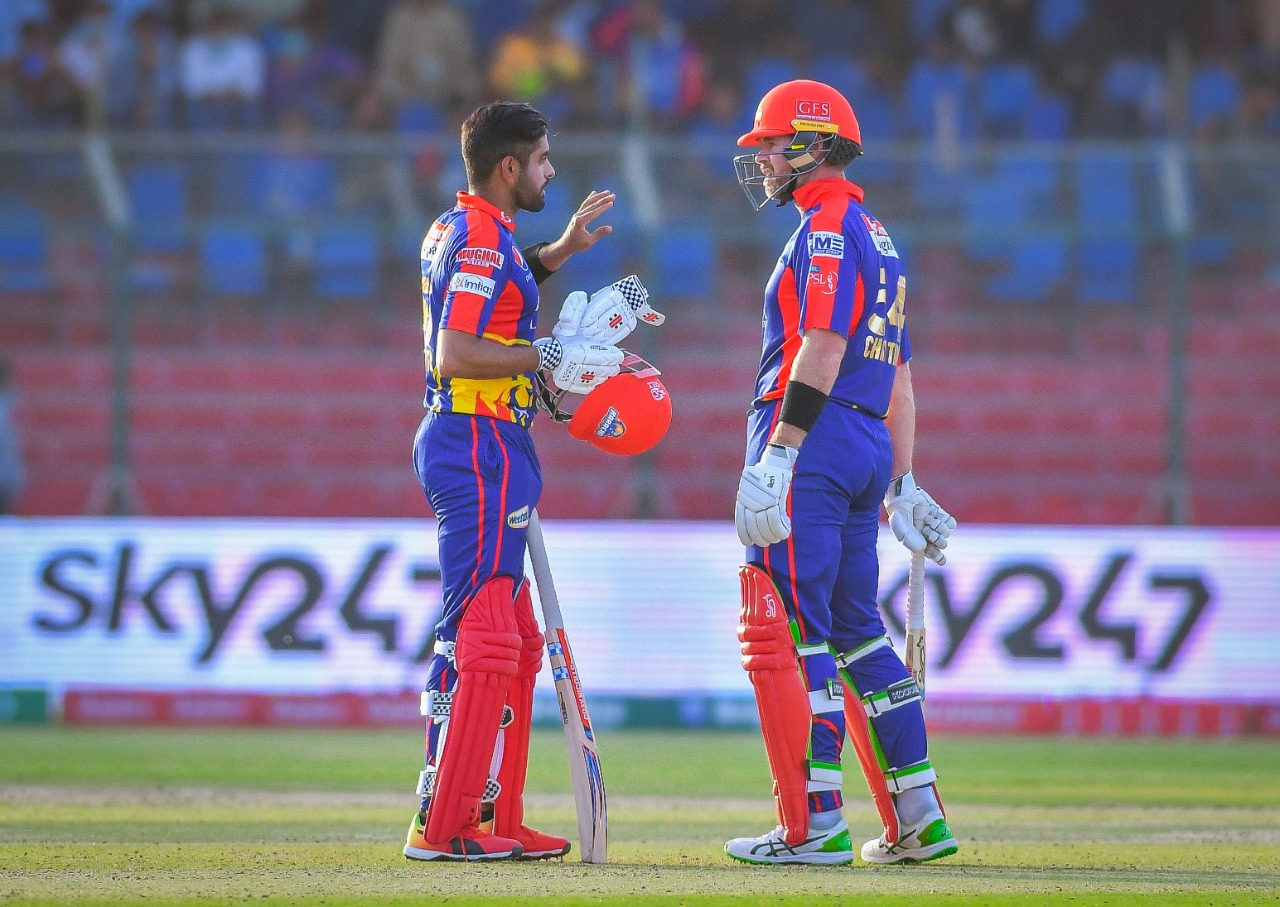 Karachi Kings continued the trend of successful run chases, Babar Azam and Mohammad Nabi scored exquisite half-centuries to take Karachi home and help them move to the top of the PSL points table.

Peshawar Zalmi entered the field without their captain, Wahab Riaz, who was suffering from an injury, hence Shoaib Malik took over the captaincy. They made two more changes to the line-up, bringing in all-rounder Amad Butt and fast bowler Mohammad Irfan to strengthen their fast bowling unit. Sherfane Rutherford and Ravi Bopara steadied the ship for Zalmi after they lost early wickets, before Amad Butt smashed Dan Christian for 32 runs in the final over of the innings, the most expensive over in PSL history.

Karachi had a poor start to the run chase losing three early wickets but Mohammad Nabi and Babar Azam took the charge against the bowlers and chased down the target comfortably in the end.

Peshawar have moved down to the second spot in the table and will move down to the third spot after the match between Islamabad United and Lahore Qalandars, scheduled to be played on 4 March.

Defending champions, Karachi Kings, will lock horns with the table-toppers, Peshawar Zalmi, in a blockbuster clash at the National Stadium Karachi. Peshawar started the tournament poorly but bounced back with three consecutive victories to stand at the summit of the PSL points table with four round matches played.

Peshawar have received yet another boost as the explosive South African middle-order batsman, David Miller has joined the squad to further strengthen the solid batting line-up. Peshawar were brilliant in their previous match, bundling Islamabad United out for only 118, with captain Wahab Riaz putting in a match-winning performance. They will look to continue their fine form and maintain their position in the standings.

Karachi, on the other hand, will be looking to bounce back from a disappointing loss to arch-rivals Lahore Qalandars in their previous outing. Although Karachi had a strong grip on the match, their death bowling led to their downfall. Karachi will be hoping for a better all-round showing this time around and will be hoping that their bowlers are up for the challenge.

It is expected that both teams will field the same line-ups for this match.

Both teams have encountered each other twelve times in the tournament. Peshawar have won 8 and lost 4. Karachi will be hoping to turn around their fortunes and beat a strong Peshawar side.

Peshawar Zalmi:
Saqib Mahmood is currently the leading wicket-taker in the tournament, picking up 11 scalps so far. He certainly has been the best bowler in the tournament so far and Peshawar will be looking towards him to put in a solid performance against a destructive Karachi Kings batting unit.

Karachi Kings:
Babar Azam fell cheaply to Shaheen Afridi in the last match and one thing we have learned so far in his career is to never take him lightly. Babar is one of the finest batsmen in the world and is the highest scorer in the tournament’s history. He will be pumped up to bounce back and score big to take Karachi home.