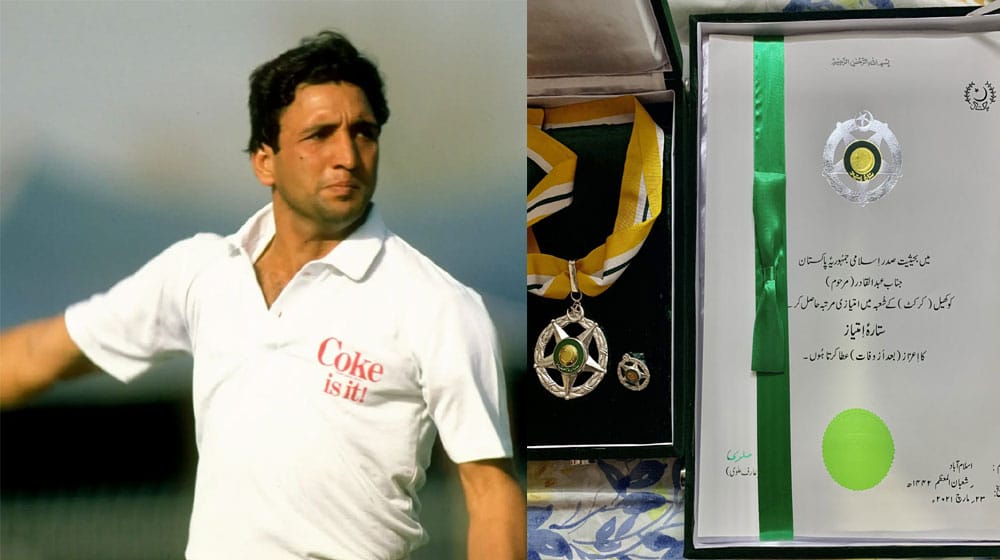 The legendary leg-spinner, late Abdul Qadir, has been posthumously conferred ‘Sitara-e-Imtiaz,’ the country’s third-highest civilian award by the government of Pakistan.

The President of Pakistan, Arif Alvi, had announced the Sitara-e-Imtiaz for the legendary leg-spinner on Independence Day last year.

His son-in-law, Umar Akmal, shared the pictures of the award, declaring it a proud moment for the entire family and the nation.

A proud moment for the family' friends and entire nation. Congratulations to all @NoorUmar6@sulamanqadir3 @immiqadir@TheRealPCB
Thank you @ImranKhanPTI@ArifAlvi
Legends never die.
Qadir uncle you are always in my heart❤ #Sitara-e-imtiaz #qadirfamily pic.twitter.com/LdosSGFCci

His son, Usman Qadir, wrote a heartfelt note on Twitter for his late father.

A very proud moment for me and my family .I am thankful to President of Republic of Pakistan for this reward to my Late Father. My heart is full of sorrow and the reason is that I couldn’t hug u at this moment I miss u DAD you are a real hero for your family & also in the field😭 pic.twitter.com/FoYQ3PU2rF

Abdul Qadir passed away due to a sudden heart attack in his hometown Lahore in September 2019. His son Usman, also a leg-spinner, currently represents Pakistan in the shortest format.