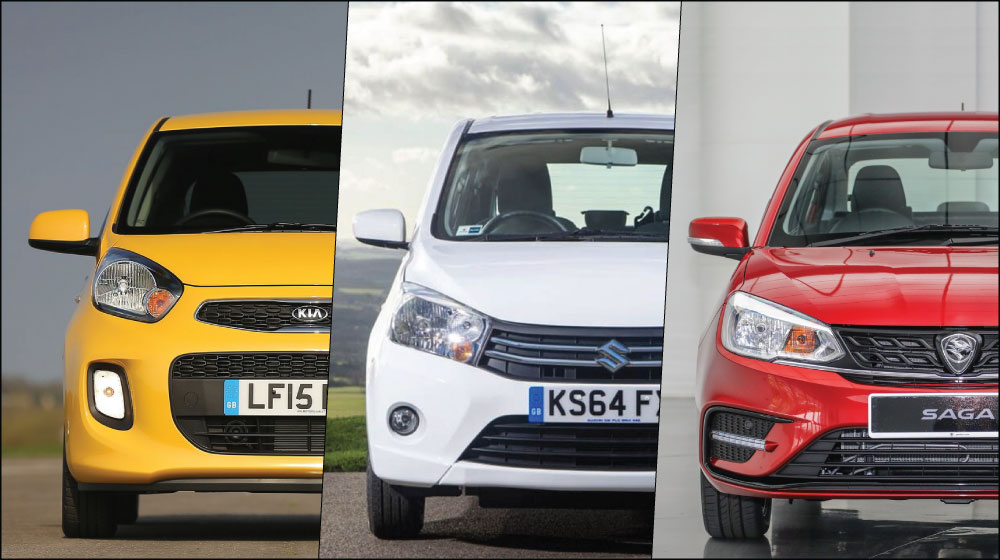 If you had Rs. 2 million about a year ago and wanted to buy a brand new vehicle, you could only choose between Suzuki Swift, the Cultus, the Kia Picanto, and the FAW V2, (of which the latter has an uncertain fate in the Pakistani market).

However, recently, the Al-Haj group, which is the same consortium that introduced the FAW V2, has launched Pakistan’s cheapest sedan — the Proton Saga, which has been receiving an astronomical amount of attention from the media, infotainment outlets, and the public. What is more interesting is that the Saga is a fairly well-equipped sedan that has been priced similar to the subcompact hatchbacks in the market.

So, is the Saga better value for money as compared to the Kia Picanto and the Suzuki Cultus? Let us put them side by side to find out. 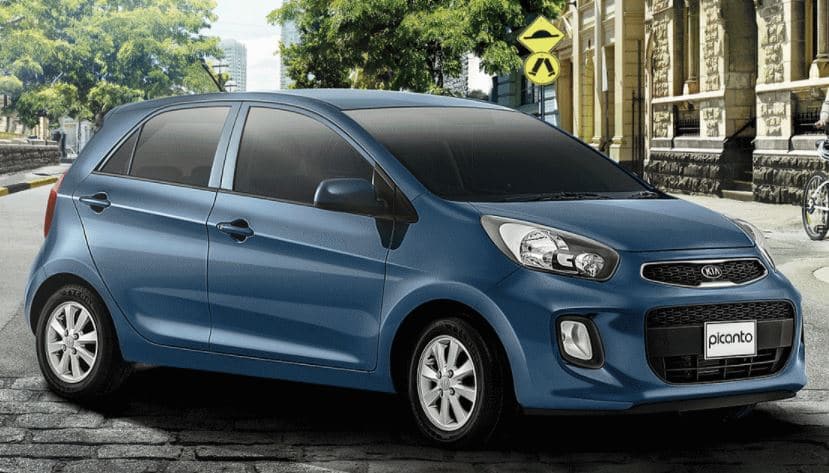 The Kia Picanto has received a polarizing reaction from the public — some love it, while others do not.

The front features a large front bumper that houses the foglights and the upper and lower grilles. The upper grille has Kia’s tiger-nose design, albeit smaller than other vehicles. The headlights also have the parking lights and turn signals integrated within and are positioned high up to give the Picanto a more distinctive look from the front, just like the Sportage. The DRLs are mounted low down in the bumper, which is an odd placement as that is where the foglights are normally found in other cars.

On the side, you can get decent 14-inch alloy wheels in the top variant. On the sides are sharp lines that run across the length of the vehicle, body-colored door mirrors, and an overall simple side profile.

At the back is a large rear windshield that makes up for more than half of the rear hatch. The rear taillights have a slightly boomerang-like design to them while the rear bumper contains reflectors and reverse lights that give the Picanto a clean and stylish look. 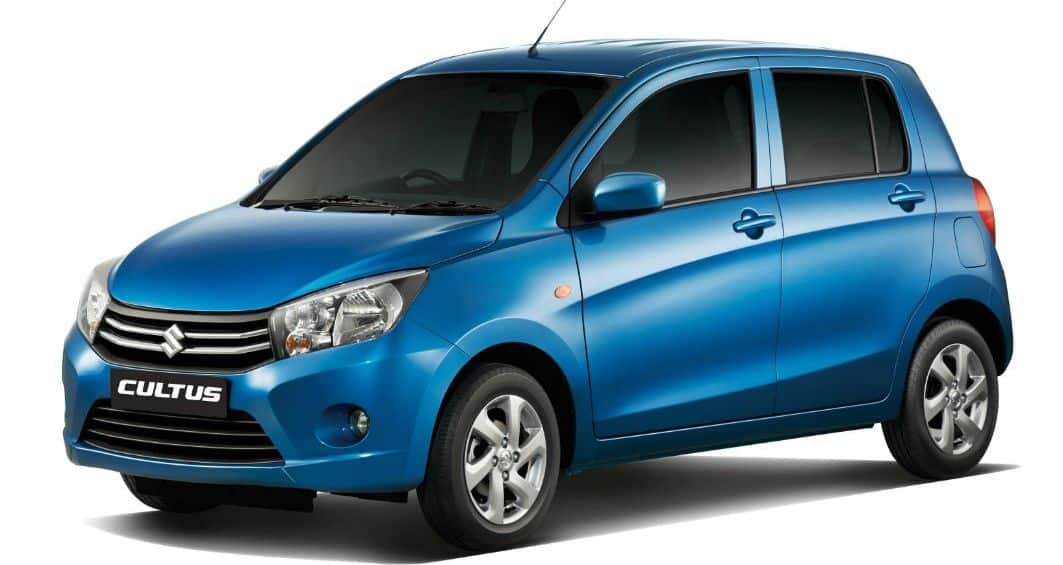 The new Cultus, which is marketed in other countries as the ‘Celerio’, has a slightly smaller and lighter body than its predecessor but has a longer wheelbase and is wider. In terms of styling, it is fairly simple.

The front has a short hood to balance the overall small size of the vehicle and provide easy maneuverability in dense traffic. It also has a standard pair of halogen headlights, a black and chrome grille with the Suzuki emblem in the middle, a pair of optional foglights, and a standard bumper design.

On the sides are 14-inch alloy wheels, body-colored door handles, simple power-operated mirrors, and additional turn signals on the front fenders. There are also some creases and lines on the doors to make the side profile edgy. 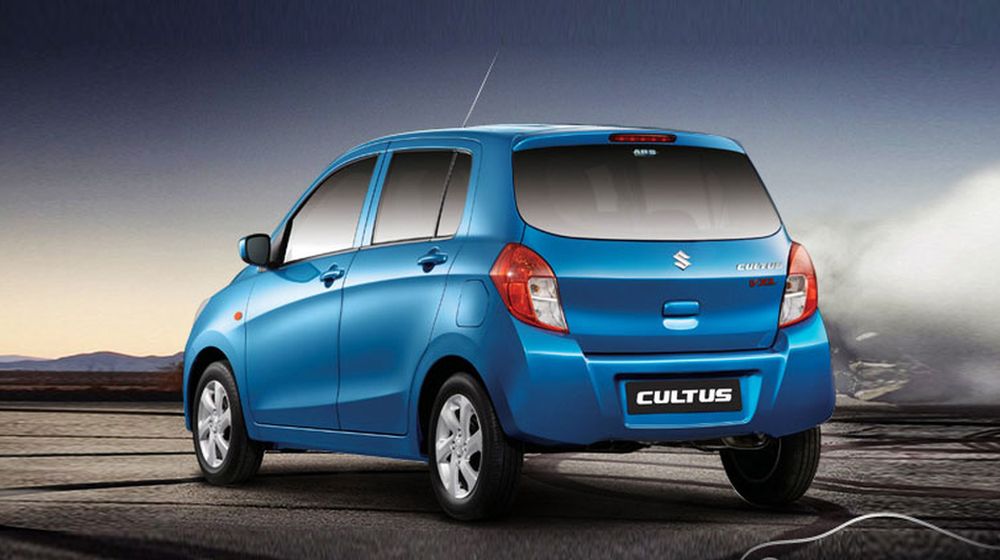 As with the Cultus, stylistically, there is not much going on with the Proton Saga. It does have some cosmetic features like the sharp headlight design, alloy rims (ace trim level only), a modern front bumper, and a unique front grille in addition to mirror-mounted turn signals and the DRLs on the bumper of the top trim Saga that add some character to the design.

At the back are some more cosmetic features like decorative vents and a diffuser, modern-looking taillights, and a decklid spoiler that perk up the Saga’s looks. Despite them, the design of the vehicle looks too old for a modern car. 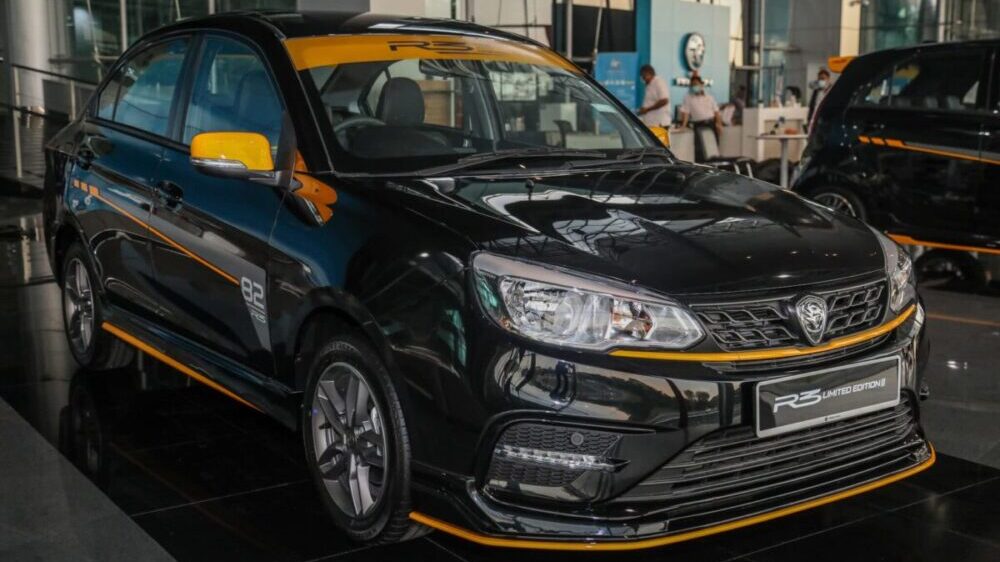 There is also a ‘limited edition’ R3 variant which is a special trim-level inspired by Proton’s ‘R3’ motorsports division to feature additional styling cues like the color black as the standard, complemented by the yellow vinyl stickers, a yellow R3 decal on the windshield, a front bumper extension, extended side skirts, and a few trim pieces. Only a limited number of these cars will be sold in Pakistan. 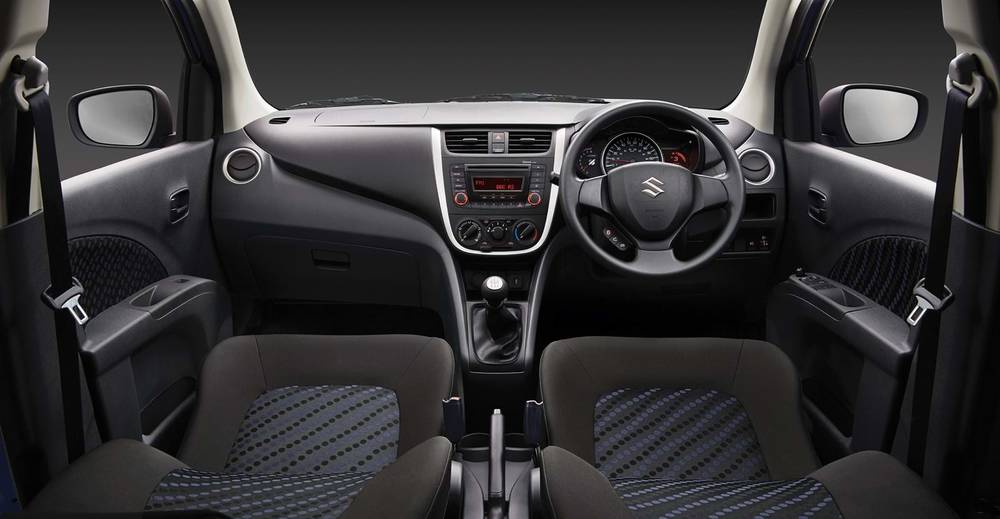 The interior of the Cultus is relatively simple but smart with basic fabric seats, an analog gauge cluster with a digital information screen, a standard CD player with Bluetooth, Aux, and USB connectivity, power windows, and dual airbags that can only be had in a VXL variant and above. The materials could have been better as the dash and other panels are all made out of cheap plastics.

In terms of cabin space, the Cultus can easily seat two people in the back, with plenty of head, shoulder, and leg space. A third person can also be accommodated but for a very short journey, as all the passengers would be tightly squeezed in the back. 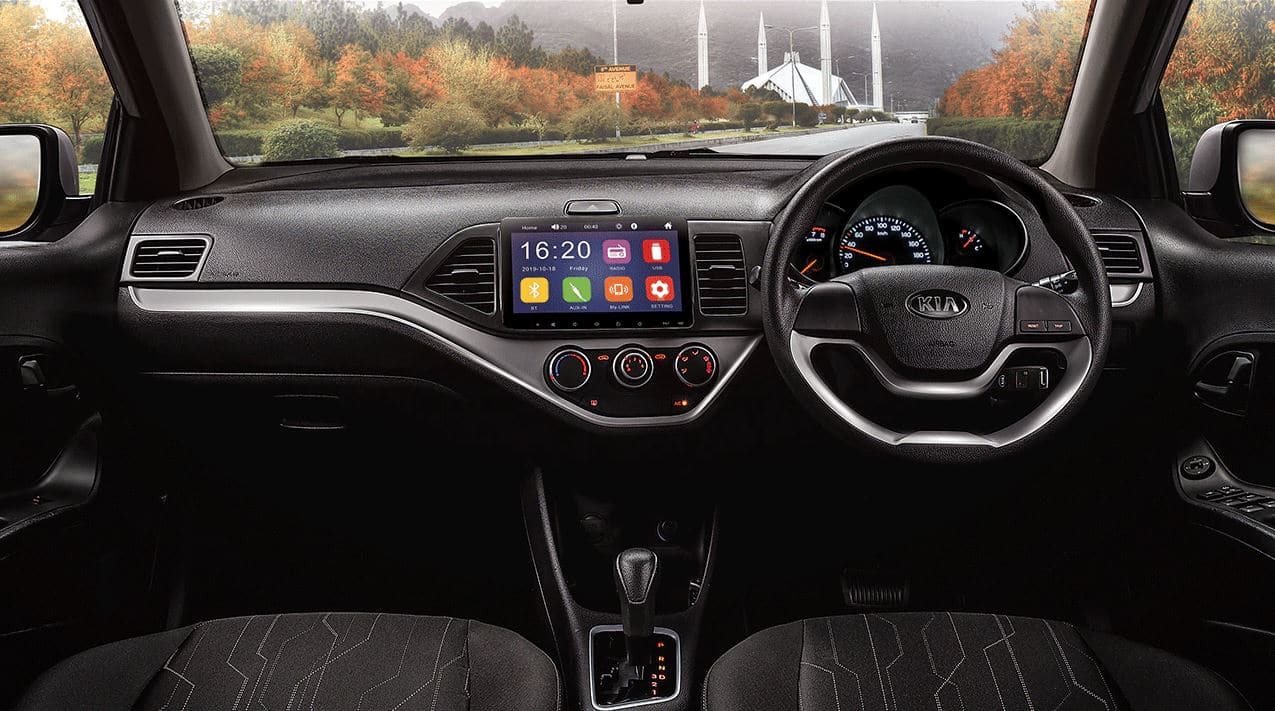 Kia’s Picanto has a slightly modern interior. The instrument cluster also features a digital display screen for additional information. The steering wheel is also unique, with a retro 2-spoke design.

It also has a stereo system with a 9-inch touch-sensitive LCD that looks modern and is easy to use. The asymmetrical central vents are also a unique design element, but like the Cultus, the Picanto could also have benefitted from a better quality interior, as the cheap plastics are a matter of displeasure in this car as well.

Despite being a small car, the Picanto is quite roomy for four people. The seats are nice and comfortable, the headroom and legroom are also fine for a person with an average height and, unlike the Cultus, the rear seats of this car also have three adjustable headrests. 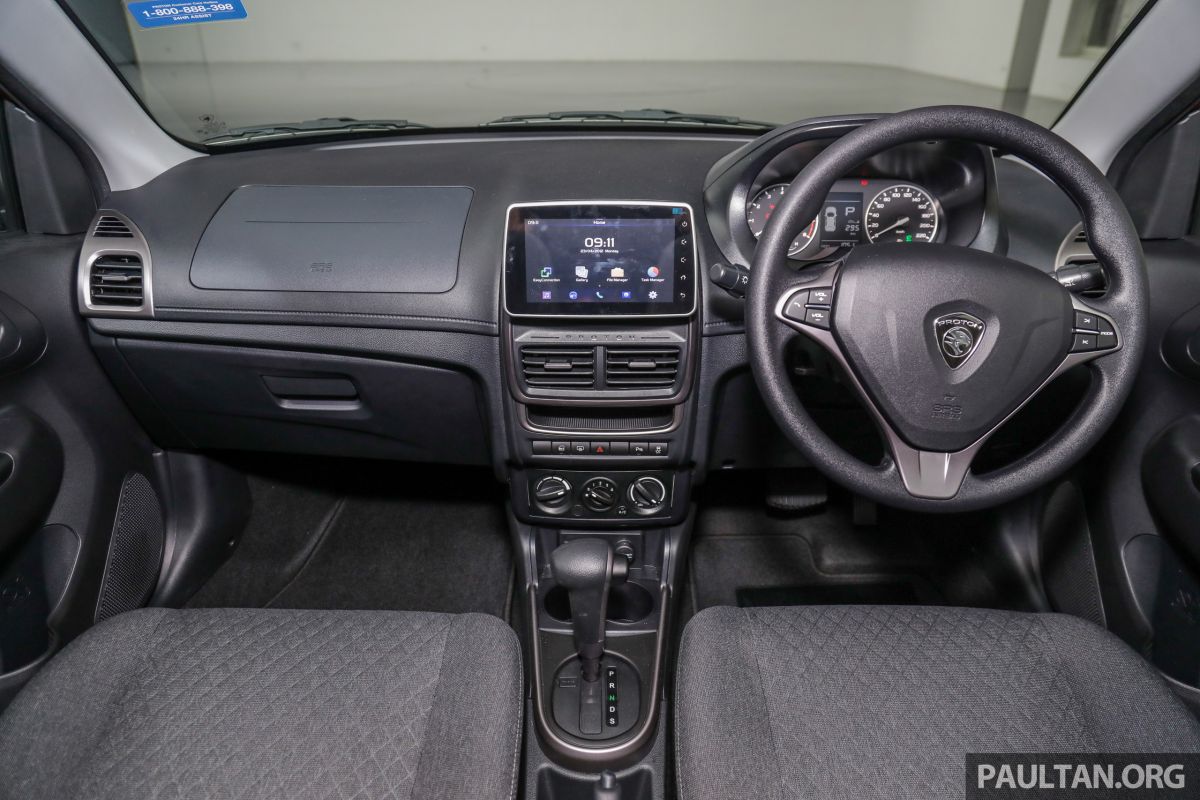 On the inside, the Saga seems to be behind its time again. Although it has a fair amount of safety and tech equipment, the interior looks quite old, even when compared to the hatchbacks.

The interior also seems to be made almost completely out of cheap plastic, which, despite being durable, does not win the Saga any appreciation. In terms of room, however, the Saga is reported to have decent cabin space for either a family of five or for four fully-grown adults.

Given that both the Cultus and the Picanto are city cars and the Saga is a subcompact sedan, the two hatchbacks are certainly quite different from the sedan in terms of measurements. Here are the weight and dimensions of these vehicles: 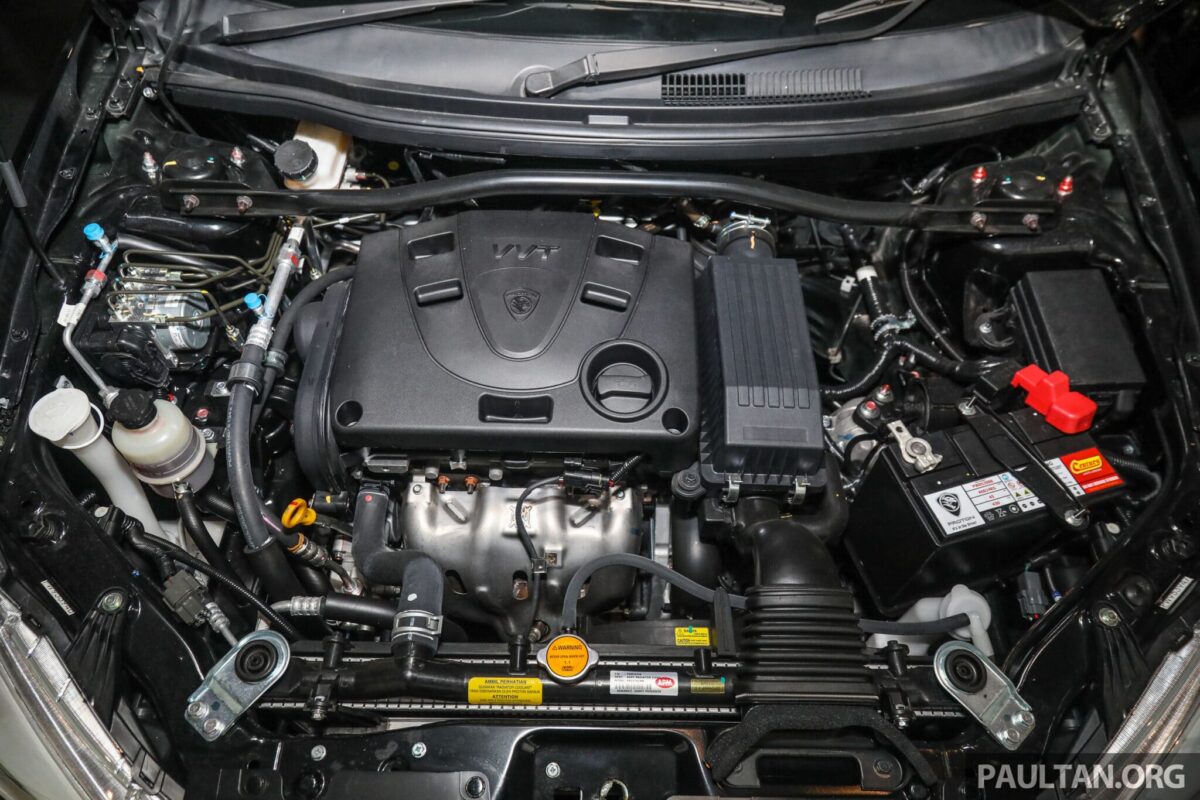 The Saga is available in three main trim levels — the Standard Manual, the Standard Auto, and the Ace Auto. All the variants will be offered with only one engine — a 1299 cc, naturally-aspirated 4-cylinder petrol engine that makes 94 hp and 120 Nm of torque. The engine will be paired with either a 5-speed manual or a 4-speed automatic transmission depending on the variant.

There will also be a ‘limited edition’ R3 variant, which is a special trim-level inspired by Proton’s R3 motorsports division that will feature additional styling cues and a slightly larger 1332 cc engine that is offered as the standard in Malaysia. The engine makes the same power but slightly more low-end torque than the Pakistani 1299 cc engine. The R3 variants will also be offered with a 5-speed manual or a 4-speed automatic gearbox options.

The car’s suspension setup consists of McPherson struts in the front and a Torsion Bar Coil-Spring suspension at the back, allowing for a soft and smooth ride. It also has ventilated disc brakes with an Anti-Lock Braking System (ABS) in the front and conventional drum brakes in the back. 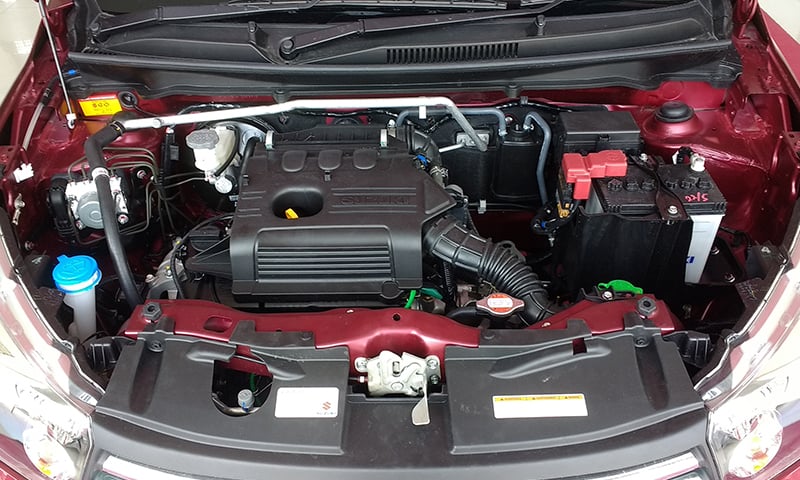 All the variants of the Suzuki Cultus have a 1.0 liter naturally aspirated 3-cylinder petrol engine that makes 67 hp at 6000 RPM and 90 Nm of torque at 3500 RPM. The engine can either be mated to a 5-speed manual or a 5-speed AGS automatic transmission.

The car’s suspension setup consists of a McPherson Struts up front and Torsion Bar Coil-Spring suspension at the back. It also has ventilated disc brakes with ABS technology upfront and conventional drum brakes at the back.

Reportedly, the fuel average that this car gives, is between 13 and 15 km/liter inter-city and 16 to 18 km/liter on the highway. 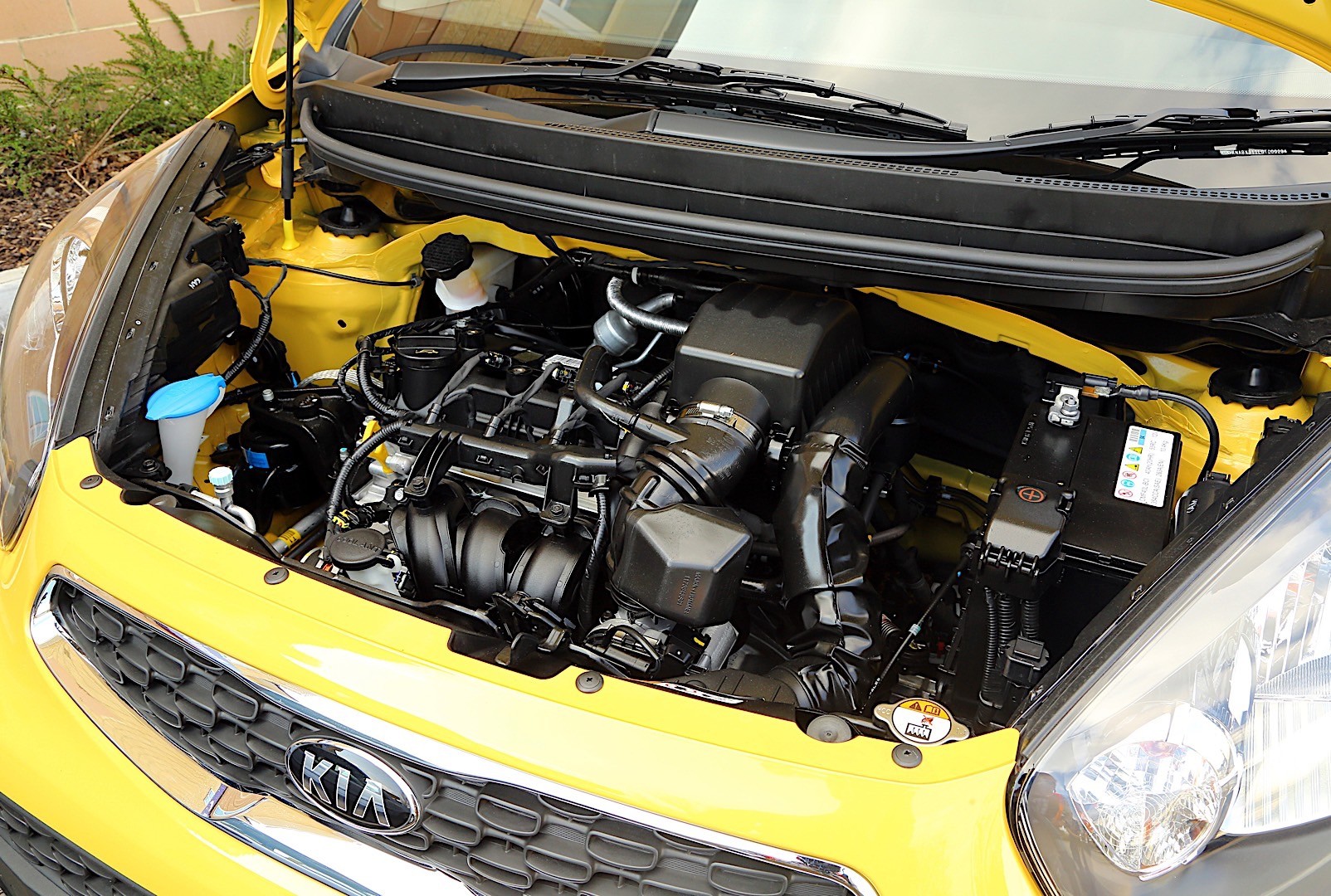 The Picanto is also equipped with a 1.0 liter naturally aspirated 3-cylinder petrol engine that makes 68 hp at 6200 RPM and 94 Nm of torque at 3500 RPM. The engine can be mated to either a 5-speed manual or a 4-speed automatic transmission.

The car’s suspension setup consists of a McPherson Struts up front and Torsion Bar Coil-Spring suspension at the back. The car is also equipped with ventilated disc brakes with ABS technology upfront and conventional drum brakes at the back.

The Picanto reportedly gets a fuel average between 12 and 14 km/liter inter-city and 15 to 17 km/liter on the highway (figures may vary).

The following comparison is between the top variants of each car for a fair comparison in terms of features.

Is Proton Saga Better Than the Honda City and Toyota Yaris? [Comparison]

Before you share your reservations, please know that we realize that these cars are from different segments but their prices are within the same range, which makes the Proton Saga a fair competitor to these hatchbacks. The prices of all the variants of these cars are as follows:

Competition has gotten fierce in the market since the arrival of the Proton Saga as it has been generating a significant amount of buzz in the market due to its market competitive price and an impressive range of features.

However, as a new player in the market, the Saga needs to cement its desirability by proving itself on the roads of Pakistan. The car was debuted a few days ago and its deliveries are expected to begin around July, which means that its on-road mannerisms are yet to be experienced by the people.

Once the Saga starts to generate positive word of mouth in the market in terms of its drive and built quality, people might start treating it as a mainstay in the Pakistani automotive market.