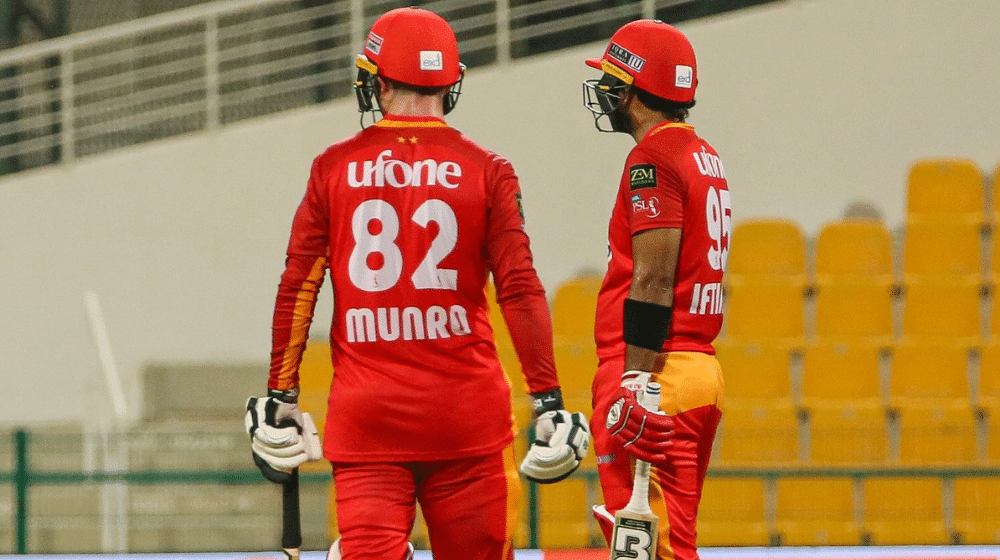 Islamabad put on a clinic as they chased down a daunting target of 191 with 8 wickets in hand. They extend their lead at the top of the PSL points table, having registered 12 points after 8 matches. Karachi on the other hand suffered their second successive defeat and sit at fourth position, level on points with Multan Sultans at fifth.

Babar Azam and Najeebullah Zadran put on a batting display, both scoring half-centuries, to take Karachi Kings to a challenging total of 190. Islamabad’s bowlers were taken to the cleaners as Karachi batsmen hit them all over the park, hitting nine huge maximums.

Iftikhar Ahmed was named as man of the match for scoring 71 runs off 39 balls, his innings included 5 huge sixes as well.

Islamabad will be looking to maintain their position at the top of the PSL points table as they face Karachi Kings in a highly anticipated encounter. Karachi, on the other hand, will be hoping to win the match and make some room between them and Multan for the fourth spot. Both teams are on equal points at the current stage.

Islamabad pulled off an amazing comeback in their previous match against Lahore Qalandars and will be hoping to continue their momentum in the upcoming match. United received a boost as their star bowler, Hasan Ali, solved his family emergency and stayed back to take part in the rest of the tournament. He will likely come into the starting XI in place of Ali Khan.

Karachi have just played once in the Abu Dhabi leg, where they lost to Multan Sultans. Karachi will not be looking to press the panic button just yet though and are expected to name an unchanged XI. They will be hoping that the likes of Martin Guptill and Thisara Perera fire sooner rather than later.

Islamabad and Karachi have encountered each other 15 times in PSL history. Islamabad have an upper hand over Karachi, winning 9 and losing six. Karachi will be hoping for a good showing and narrowing down the head-to-head record.

Hasan Ali is Islamabad United’s frontline pacer and their leading wicket-taker and the management will be hoping that he is fully rested after he ruled himself out from the Lahore Qalandars match. Hasan’s pace upfront could trouble the Karachi batsmen and provide the platform for the rest of the bowling attack to restrict Karachi to a low total.

Mohammad Amir was Karachi’s most expensive bowler in their match against Multan Sultans and he will enter the field with a point to prove. Amir is Karachi’s leading fast bowler and a lot of Karachi’s good work in the bowling departments depends on his performance.