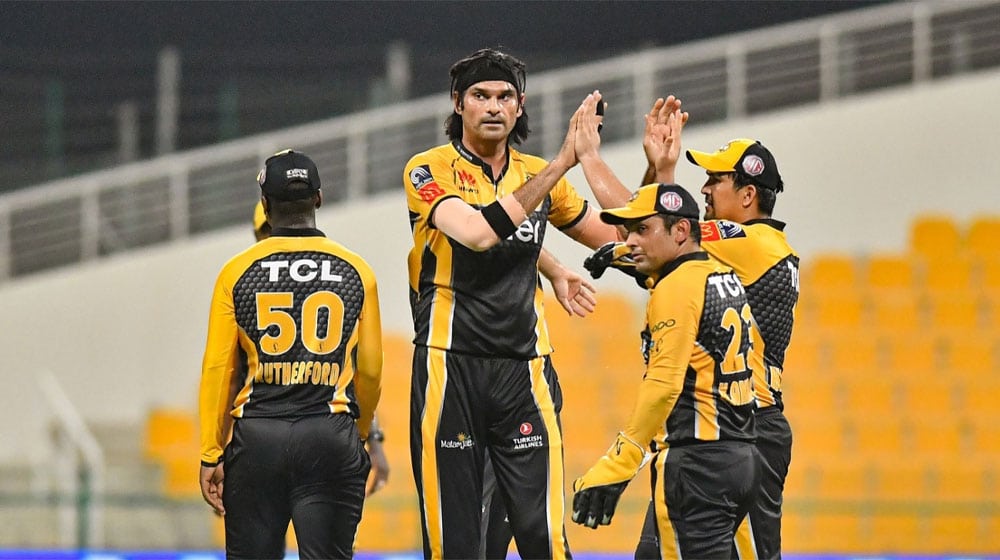 Peshawar Zalmi had to briefly field with ten men after one of their stunts was failed by the on-field umpires.

Peshawar reportedly faked Mohammad Irfan’s hamstring injury after he had bowled his quota of overs, and wanted to replace him with a better fielder, Haider Ali, for the second part of the innings. However, the plan failed after umpire Aleem Dar refused 20-year-old Haider Ali as a substitute for 39-year-old Mohammad Irfan.

As per details, Irfan first pulled a hamstring while bowling the penultimate delivery of the final over of his quota, but stood up again to complete the over. He fell down again in the next over while riding the boundary, causing a lengthy delay.

Irfan was taken outside the field for treatment while Zalmi called Haider Ali in his place.

However, by the end of the 12th over, Aleem Dar, the on-field umpire, signaled that Haider cannot substitute Irfan on the field, causing another lengthy delay.

Zalmi skipper Wahab Riaz and seasoned all-rounder Shoaib Malik were seen arguing with umpires but in vain. Haider had to leave the field and Zalmi had to bowl the 14th and 15th overs without Irfan or a substitute fielder.

However, after a lengthy conversation with the Zalmi skipper and Malik, Dar let the 35-year-old Khalid Usman take the field in place of Irfan.

During a timeout in United’s innings, Irfan’s teammate Amad Butt suggested that the pacer’s injury was only a case of cramps.