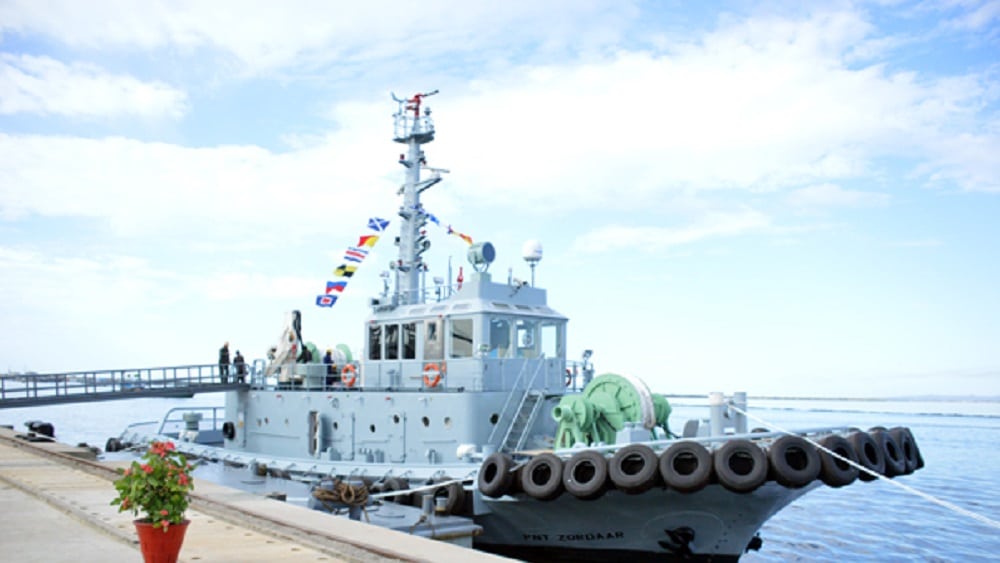 Handing over ceremony of 2 Tugs built for Pakistan Navy was held at PN Dockyard on 21 September 2021.

Vice Admiral Naveed Ashraf, Commander Pakistan Fleet, graced the occasion as chief guest. The ceremony was attended by high-ranking officials from the Pakistan Navy and engineers and workers of KS&EW.

According to a statement by DGPR Navy, a single Tug has a length of 25m with a displacement of 250 tons. It has a maximum speed of 12 knots and is propelled by two diesel engines having an azimuth drive propulsion system with automated integrated machinery and a tug handling system.

Addressing the ceremony, Vice Admiral Naveed Ashraf said that the construction of these tugs at Karachi Shipyard is yet another example of sheer hard work and dedication by the engineers and workers of KS&EW.

He appreciated the timely delivery of these tugs despite the COVID-19 pandemic and resultant challenges like the non-availability of OEM engineers and Kit-of-Material etc.

He congratulated all stakeholders particularly the management and workforce of Karachi Shipyard for achieving this important milestone.

Managing Director KS&EW, Rear Admiral Ather Saleem, said that workforce of KS&EW is proud to be entrusted with such projects and thanked the valued customers, Pakistan Navy for reposing confidence in KS&EW.

He further highlighted commitments of KS&EW had increased manifolds but his teams were more determined, motivated, and geared up to undertake the future challenges.

He added that the recent inauguration of the Ship Lift & Transfer System (SLTS) by Prime Minister Imran Khan would go a long way in enhancing yards, shipbuilding, and ship repair capabilities.

He assured that KS&EW will remain committed to delivering state-of-the-art platforms and services to the utmost satisfaction of the end-users.