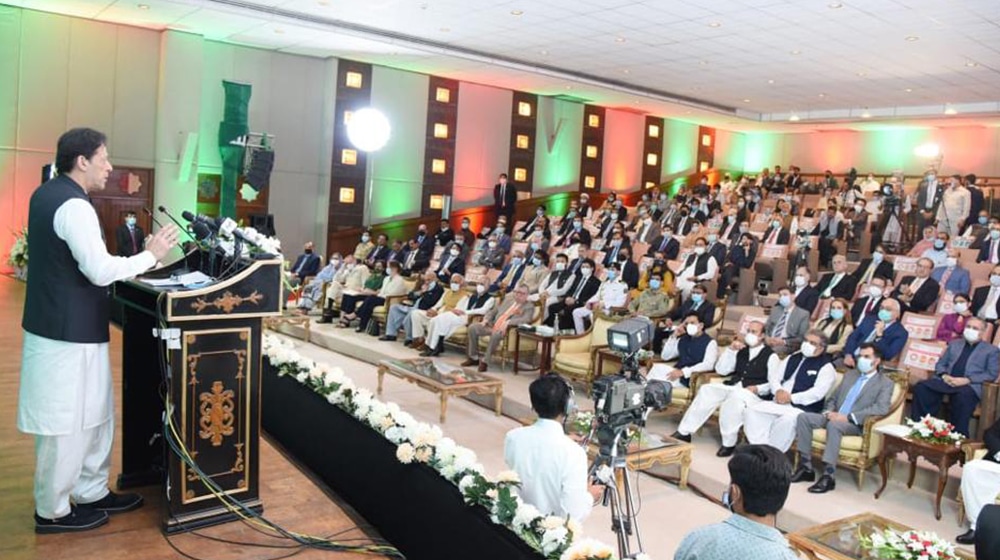 Prime Minister Imran Khan has launched the Kamyab Pakistan Program in a ceremony in Islamabad today.

The program worth Rs. 1400 billion is aimed at uplifting 3.7 million poor households and is expected to improve the living standards of the financially challenged segments of the population.

While speaking at the launch, the premier said that the program is a landmark initiative that will improve the living standards of the common man. He added that it is a product of hectic efforts and consultation processes, and will progress successfully.

He recommended the constitution of a committee for the evaluation of the progress of the program and to address its potential problems.

The Prime Minister (PM) acknowledged that “our system only caters to a small segment of the elite class. Inequality is the basis of the downfall of any society. The flawed policies of the past left far behind our marginalized segments of the society”.

He stated that the current government is trying to change priorities to uplift poor families, and that the State of Madina is a successful model of the world because of its principles of humanity and justice.

He explained that there has been a 100 percent increase in the prices of petroleum products over the last few months, but that his government has only increased prices by 22 percent, for which it has slashed the sales tax and petroleum levy on petrol and diesel.

He mentioned that he is confident that the improvement in the global supply chain will reduce the prices of commodities, and the benefit will be extended to the masses. He also claimed that the government is cognizant of the problems of society’s downtrodden segments caused by the price hikes, and announced that a program is being launched under Ehsaas to provide directly targeted subsidies to them for essential commodities such as flour, ghee, and sugar.

The Minister of Finance, Shaukat Tarin, declared that the Kamyab Pakistan Program (KPP) will be extended to six million households to strengthen the poor and revolutionize their lives. He outlined its main components and stated that interest-free loans of up to five hundred thousand rupees will be given to poor households under Kamyab Karobar, and interest-free loans will be given to the farmers under Kamyab Kissan.

The Special Assistant on Youth Affairs Usman Dar, remarked that the KPP is an important step towards a welfare state that will strengthen microfinance institutions and alleviate poverty by generating job opportunities.