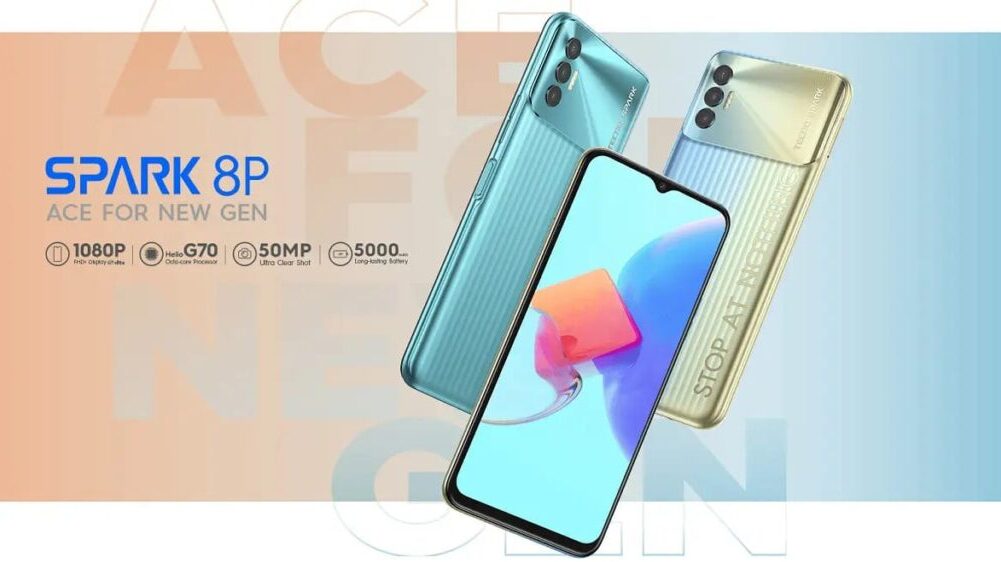 Tecno Spark 8P was supposed to break cover sometime this month but it appears that Tecno has quietly announced the phone already. It broke cover in Africa earlier this week and is now slowly making its way to other regions. Upfront, the Spark 8P features a 6.6-inch LCD with FHD+ resolution and a 90Hz refresh rate, which is rare to see in the entry-level segment. The waterdrop notch and the thick bottom bezel, however, are pretty common elements of a budget phone.

The screen has a tall 20:9 aspect ratio and the fingerprint sensor is mounted on the side.

The mid-range Helio G70 SoC is at the helm of the phone with 4GB RAM and up to 128GB built-in storage, which is also a rare sight in budget phones. Most entry-level phones top out at 64GB these days. You can expand the storage by up to 256GB with a microSD card.

The phone comes with Android 11 pre-installed with Tecno’s HiOS 7.6 Android skin on top.

The vertical triple camera setup on the rear includes a 50MP AI-powered primary camera with an 8MP depth sensor and a 2MP macro camera. This camera can capture 1080p videos in 60FPS, 120FPS slow-motion videos, and HDR videos.

The waterdrop notch selfie camera is an 8MP shooter.

You get a large 5,000 mAh battery to support all these features, but sadly there is no fast charging on board.

Pricing is yet to be announced, but we will not have to wait for long since the phone has already been announced in several regions. However, given Tecno’s usual pricing for these specifications, we expect the phone to cost somewhere around $200.