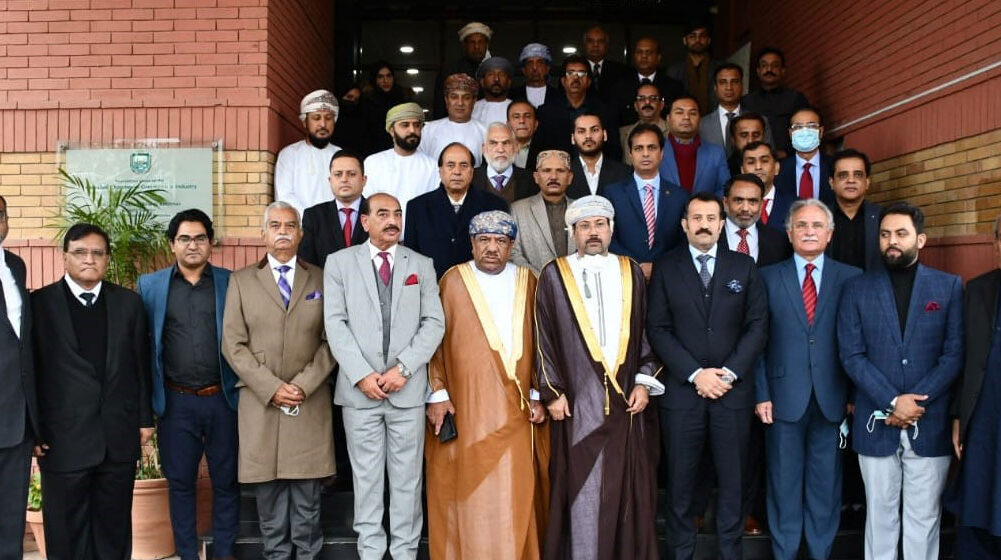 Speaking at the occasion, Engr. Redha Al Saleh, Chairman of Oman Chamber of Commerce & Industry said that the bilateral trade of around $500 million between Pakistan and Oman was not reflective of the actual potential of both countries and strong efforts should be made from both sides to take it to at least $1 billion.

He said that the geographical location of both countries offered them great potential to enhance business and investment relations as Oman was a gateway for Pakistan to access Gulf Cooperation Council (GCC) countries, Africa and other regional markets. Similarly, Pakistan was a gateway for Oman to access Central Asia, China and other markets. He said that many Pakistanis have invested in Oman and more should come. He said that many Pakistani products were reaching Oman through neighbouring countries and stressed that both countries should promote direct trade to achieve better results. He emphasized reactivating Pak-Oman Business Council to improve trade relations.

He said that Gwadar and Salalah ports can be used to create a good communication channel and promote trade relations between the two countries. He said that the visit of Oman’s business delegation was a right step to improve business linkages between the private sectors of two countries. He urged that both countries should encourage regular exchange of trade delegations to explore all untapped areas of mutual cooperation.

Ambassador of Oman to Pakistan said that his country was keen to promote trade ties with Pakistan as both countries have good potential to cooperate in many areas for mutual benefit. He said that both countries were discussing starting a ferry service to link Pakistani ports with Oman, Dubai and other regional countries that would create more opportunities for bilateral trade promotion.

Ambassador of Pakistan to Oman said that the government of Pakistan was focused on a geo-economic strategy to promote Pakistan’s business and economic relations with foreign countries and hoped that the visit of Oman’s business delegation would promote bilateral trade relations between both countries. He said that foreign missions of both countries would work in coordination to promote linkages between entrepreneurs of both sides.