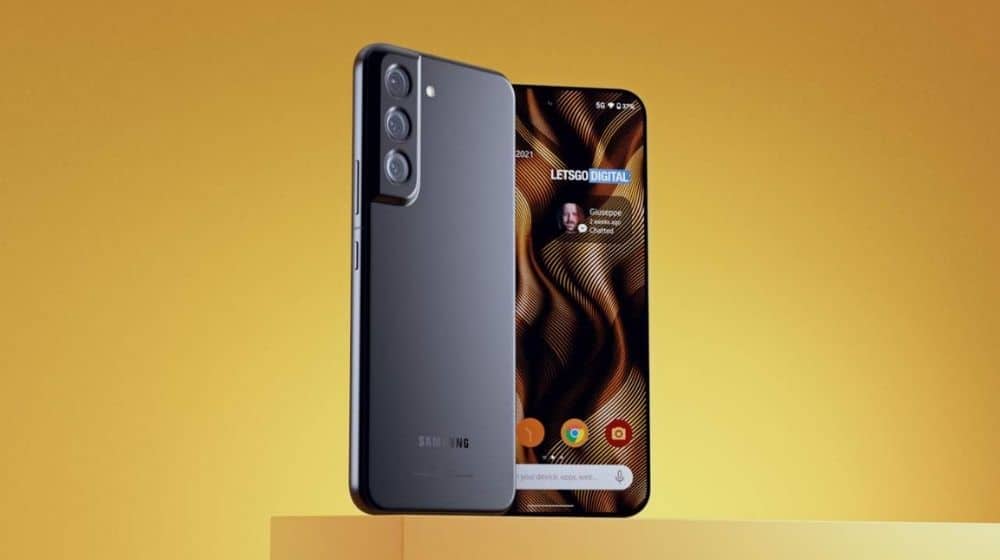 After all the leaks and rumors of the upcoming Galaxy S22 series surfacing online, we’ve got a pretty good idea of what Samsung has planned. Among these, the rumor that has kept everyone hooked is that the S22 Ultra will be a successor to the ill-fated Galaxy Note series, for which the company had halted production last year. This means we could see an integrated S Pen along with a wider display and squared-off design for the S22 Ultra.

However, the latest leak is the biggest of them all, delivering not only detailed specs and images but also the likely release date.

According to the leak, the Galaxy S22 will feature a 6.1″ Dynamic AMOLED 2X display that will offer a 1080p resolution with a variable refresh rate of up to 120Hz, a maximum brightness of 1500 nits, and Gorilla Glass Victus protection.

Under the hood, the smartphone will either have an Exynos 2200 chipset or a Snapdragon 8 Gen 1, depending on the region, it’s being sold in. While Europe will be getting a 4nm Exynos 2200 chip, North America will be receiving the Snapdragon version.

The Exynos 2200 will also be the first-ever smartphone chip to make use of AMD’s RDNA2 GPUs, which can be found onboard the Xbox Series X and PS5. Furthermore, the smartphone will pack 8GB RAM with either 128GB or 256GB of internal storage. Connectivity options will include, Wi-Fi 6, Bluetooth 5.2, and 5G.

In terms of optics, the vanilla Galaxy S22 will feature a triple-lens setup. It’ll include a 50MP primary sensor, supported by a 12MP ultrawide as well as a 10MP telephoto that will allow 3x zoom. While at the front there will be a 10MP selfie camera.

Powering the vanilla model will be a 3,700mAh battery that will support both wired as well as wireless charging.

When compared to the vanilla model, the Galaxy S22+ will keep the same general design, while topping it off with a larger display and a bigger battery.

In terms of the display, the Galaxy S22+ will flaunt a 6.6″ Dynamic AMOLED 2X screen that will offer a 120Hz variable refresh, higher peak brightness of 1750 nits, and Gorilla Glass Victus protection.

Under the hood, again you’ll either find an Exynos 2200 SoC or a Snapdragon 8 Gen 1 depending on the region. One UI 4.0 based Android 12 OS is expected to come preinstalled on the device.

The smartphone will weigh 195g, making it a bit hefty when compared to the 167g of the vanilla variant. However, unlike the 3,700 mAh battery of the vanilla model, this time you will be getting a slightly larger 4,500 mAh battery. Previous rumors suggested that the battery will also carry support for 45W fast charging.

For photography, you will be getting the same camera unit as the vanilla Galaxy S22. It’ll include the same 50MP primary sensor, supported by a 12MP ultrawide as well as a 10MP telephoto that allows 3x zoom. While, at the front, you will find a 10MP selfie camera.

Finally, we come to the most anticipated model of the series – expected to carry forward the legacy of the Note series – the Galaxy S22 Ultra. The smartphone will have a 6.8″ Dynamic AMOLED 2X display that will have a resolution of 1440p, a more sophisticated 120Hz variable refresh rate that can go down to 1Hz, a maximum brightness of 1750 nits, and Gorilla Glass Victus protection. The display also features a punch-hole cut-out housing the 40MP selfie camera.

On the hardware front, the Galaxy S22 Ultra will be very similar to the S21 Ultra, only with improved and upgraded processing. Being the next-gen Ultra model of the series, we’ll be seeing an upgraded quad-camera unit. It’ll include a 108MP primary sensor with OIS, supported by 12MP ultrawide, and two 10MP telephoto lenses.

The Galaxy S22 Ultra will have the biggest battery of the lot, a 5,000mAh battery, as well as a built-in S Pen, which will be pushing its weight to 227g.

This is all of the info mentioned in the leak, we’ll know more once the flagship series is made official by the company in a special launch event, scheduled for next month. The series will go on sale in Europe on February 25.